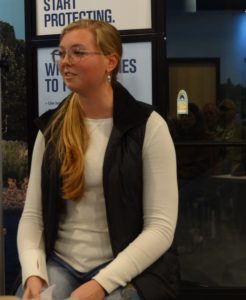 The first River Talk of the season took place on Oct. 9 in the Estuarium in Superior, Wisconsin. Jenny Sherren, an undergraduate student at the University of Minnesota Duluth, presented, “I’ve Seen the Light: Working to Detect Bloody Red Shrimp in the St. Louis River.” She discussed her research project, which involved luring tiny zooplankton into traps in the St. Louis River Estuary with light.

Sherren undertook the project as part of her work for the Lake Superior National Estuarine Research Reserve as a Freshwater Fellow. The specific type of zooplankton she sought was bloody red shrimp (Hemimysis anomala), an invader from Europe.

While the shrimp shy away from bright light, researchers have discovered they are attracted to dim light at night. They are also found in high concentrations along hardened shorelines, such as break walls, wooden docks and sheet pilings – something in abundance in the harbor area of the estuary. The first bloody red shrimp in the harbor was discovered by the U. S. Fish and Wildlife Service in 2017. 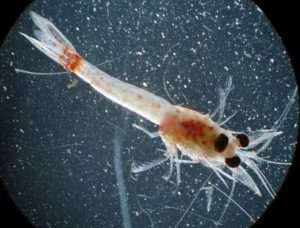 In consultation with a researcher in New York, Sherren built several light traps using PVC pipe and soda bottle tops. Waterproof flashlights provided the light, which she dimmed using layers of clear tape colored with permanent marker. She placed the traps underwater in areas where the shrimp have been found previously. She woke at 4 a.m. every morning to collect water from the traps before the sunrise.

“That was fun for about a week,” Sherren said. “Then I learned that sleep is very important in my life!” She was eventually able to adjust her trap-checking schedule to allow for more sleep during the four weeks of collection.

In addition to zooplankton, Sherren saw other creatures during her morning sojourns. “There’s a fox that lives on Wisconsin Point, and I saw rabbits and beaver,” she said. She also described the phenomenon of small waves created by the action of minnows in the shallows. 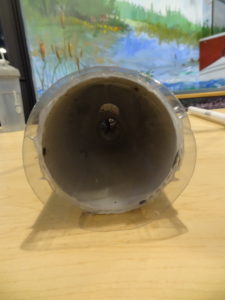 She is halfway through processing the samples collected this summer. So far, she has not found any bloody red shrimp, but she has found another invasive zooplankton, the spiny waterflea.

Sherren said she also learned valuable lessons with her project, such as:

-How to move confidently forward with her decisions and deal with any resulting issues.

-How to measure success without the help of a letter grade.

-How to interact with community members to help get her project done.

-How to take care of her health. “You come before your research; you are not defined by it,” she said.

The next River Talk takes place at 7 p.m. on Nov. 13. Matt TenEyck with the University of Wisconsin-Superior will talk about the Ballast Water Treatment Facility the college recently purchased, and what goes on there.