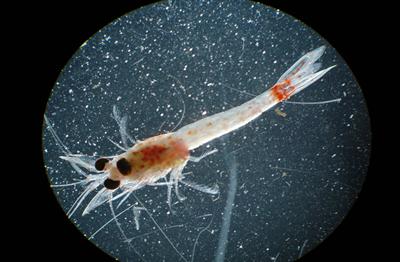 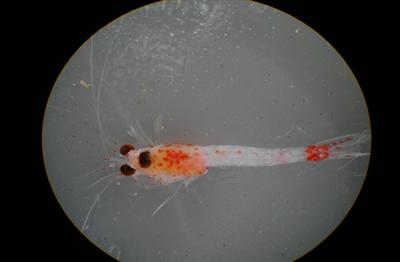 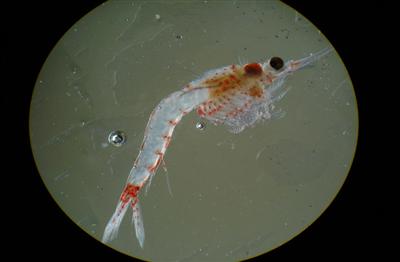 Where Did It Come From?
The bloody red shrimp is native to the Ponto-Caspian region of eastern Europe—the same area that zebra mussels came from. Like zebra mussels, it spread across Europe, reaching the Baltic Sea in 1992 and the United Kingdom in 2004. It was first reported in the Great Lakes by NOAA in samples collected in Muskegon, Michigan in November of 2006 in waters connected to Lake Michigan. This tiny shrimp forms swarms in excess of >1500 individuals per square meter (135 per ft2).

It has also been found in samples taken in Lake Ontario off Oswego, New York. In both locations, adults, juveniles and pregnant females were found, indicating that this species is reproducing in the Great Lakes. Finding the bloody red shrimp in two separate locations suggests that the species may be wide-spread, and experts expect that it will be seen in additional locations as people begin actively looking for it.

What Are The Impacts?
The impact of this species on the Great Lakes is yet unknown, but based on its history of invasion across Europe, significant impacts are possible. The bloody red shrimp is an omnivore; its diet includes waterfleas and algae. They may compete with young fish, while providing food for larger fish. The invasion of this species in some European

reservoirs has been documented to accelerate silica cycling, resulting in blooms of diatoms and, in some cases, plating out of silica onto pipes.

Where Is It Found?
The bloody red shrimp prefers habitats associated with hard structures or rocky bottoms and actively avoids direct sunlight. It has a unique swarming behavior unlikely to be confused with anything else in the Great Lakes. During daylight hours, it may be observed forming reddish swarms in the shadows of piers, boats or breakwalls. Swarms disperse at night, but in clear calm waters, the bloody red shrimp may be detected at night by shining a bright light on the water—the shrimp will rapidly swim away from the light.

It is unknown at this point whether zebra and quagga mussel beds in the Great Lakes will be suitable habitat for the shrimp. The species avoids soft bottoms and vegetation. In its native range, across Europe and in the Baltic Sea, the bloody red shrimp is found in water depths to 50 meters (166 feet). It seems to prefer slow-moving waters, but it has been found along rocky, wave-exposed shorelines. The shrimp is also reported to spend daylight hours hiding in rocky crevasses and boulder cavities, but it has also been observed swarming in shadowed areas near the surface by day.

What Is Its Life History?
Bloody red shrimp have an individual lifespan of about nine months, grow to adults in just 45 days, and

can produce up to four generations per year. This lifecycle is significantly more rapid than the native opossum shrimp. Females have been documented to carry up to 66 eggs in a clutch. Broods carried by females in the Muskegon population ranged from two to seven.

What Does It Look Like?
The bloody red shrimp is a mysid, a relative of the native Great Lakes opossum shrimp (Mysis relicta). Both species have stalked eyes and are generally less than 1/2 inch in length—the invader tends to be slightly smaller, though size ranges overlap. The bloody red shrimp is more red in color, and the native species is more clear, though both are quite variable. Preserved animals tend to lose coloration. The best way to tell the two species apart is by the shape of the tail (requiring a hand lens or low magnification microscope) — the native Mysis has a deeply forked tail, whereas the new invader has a flat end to its tail with two prominent terminal spines. Identifications should be confirmed by an expert as several other mysid species are also invading across Europe with significant potential to become established in North America.

LOOK during the day in the shadows of piers, boats, or breakwalls, especially after July.

LOOK at night. In clear, calm waters they may be visible as reddish ‘flashes’ reflecting as they swim away from a spotlight or flashlight.

Hemimysis are relatively strong swimmers and are not easily captured using standard scientific sampling nets or traps. Individuals may be captured using a fine mesh dip net such as used for minnows – this is clearly easiest to do when animals are swarming.

DO NOT transport live Hemimysis! Preserve Hemimysis in ethanol (grain alcohol), preferably 90% strength. 70% ethanol or rubbing alcohol are also acceptable and may be available from local pharmacies. Drain water from the specimens and place them in a small glass or plastic container and fill it with the alcohol.