Blog > Wild Stories of Wildlife on the St. Louis River

Martha Minchak, retired assistant area wildlife manager for the Minnesota Department of Natural Resources was the kick-off speaker for the River Talk season series in October. Her talk, “Wild Stories of Wildlife on the St. Louis River,” highlighted incidents and projects from her 38-year career in resource managment.

Although her work on estuary projects was her passion, it was just a small part of her job. “I managed mice to moose and everything in between,” Minchak said. Her main job was conducting wildlife surveys to collect data for the management of hunting seasons and for nongame wildlife management. “Anything that moved out there, we counted it,” she said.

Her work on the estuary began when she became involved in the “tail end” of the first St. Louis River Habitat Plan, which was completed in 2002. “That kind of set the tone and the focus of all of our work in the estuary, ever since.”

Later, as the project manager for the St. Louis River Restoration Initiative for two years, Minchak worked fulltime on habitat restoration projects in the estuary. “In my career, these were the most fulfilling things I have done. I look at them as legacy-type projects – they have an impact on the future and we are leaving a place better than before.”

Interstate Island is an example of one such restoration project. The small land mass in the Duluth-Superior Harbor sits on the Wisconsin-Minnesota border. It provides vital habitat for the common tern, a bird that is considered endangered in Wisconsin and threatened in Minnesota. In 2015, the island started flooding due to high water levels in Lake Superior and the estuary. Minchak and a team added sand to the tern nesting colony on the island for a short-term fix. 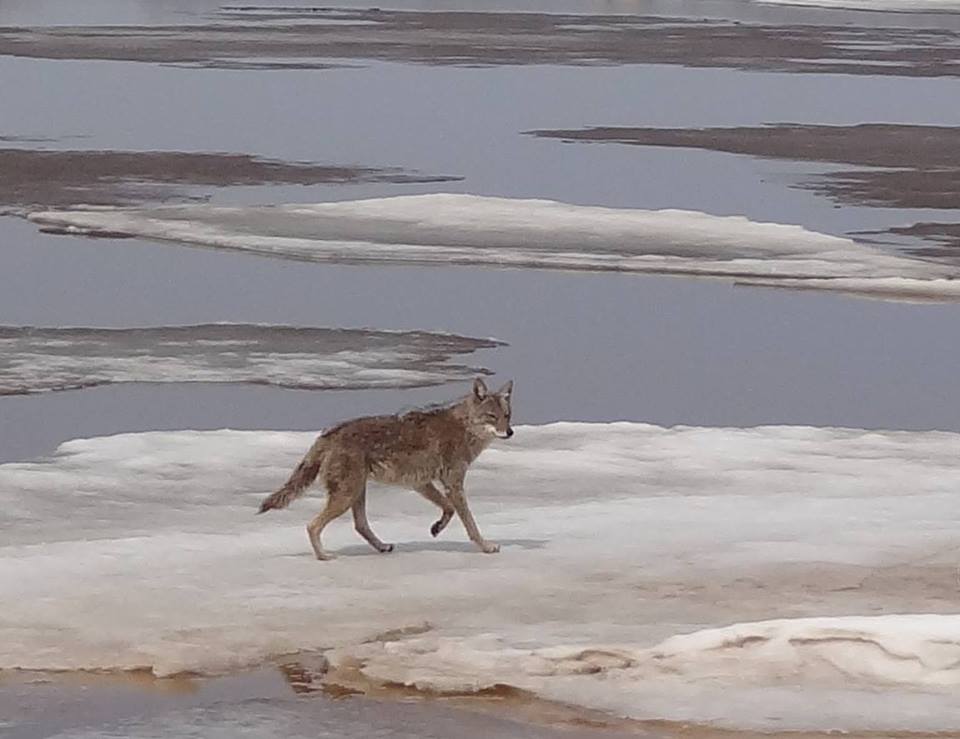 Water levels continued to rise, however, and the island was in danger of washing out again. In 2019, Minchak and partners took on a complete restoration of the entire island to re-establish the original “footprint” of it from back in the 1950s.

“It was a total success story and the common terns are doing okay,” Minchak said. “Once we get the gulls more under control, we hope the terns will respond a bit better.” The island hosts fewer than 200 pairs of nesting terns, while there are over 30,000 pairs of nesting ring-billed gulls. Fencing on the island keeps most gulls out of the tern nesting area.

Minchak also mentioned her work on Radio Tower Bay, Knowlton Creek, and in restoring wild rice to the estuary.

Then she segued into stories about wildlife. A large part of her job was dealing with nuisance or injured wildlife, and also crazy questions that people had about wildlife. In the past, she received many complaints about the large numbers of deer in Duluth. People also reported seeing fishers in their yard, which they thought were black panthers, even though they are much smaller than a panther.

“One constant in my career have been the bears. People know me around town as the ‘Bear Lady.’ There have been just all kinds of crazy bear incidents,” Minchak said. The DNR used to trap and relocate nuisance bears. Minchak said they stopped doing that 10-15 years ago because they found the bears would often return to the same area a few days later. She said that figuring out a way to deal with the issue is more effective.

The only time the DNR traps bears now is if they need to be destroyed because they are acting aggressively or doing major property damage.  Minchak told a story about a bear that lived around Island Lake just north of Duluth. The bear knew how to open car handles that were the flip-up kind. “Someone left a pack of gum in the car. The bear got in the car and the door closed behind it. The bear made a mess of the car in its attempts to escape,” Minchak said, showing an image of the torn-up interior of a car.

She also told true tales of a mallard nesting atop a skyscraper in Duluth, peregrine falcon chicks in peril, a black lab and a coyote pair who used to hang out by a local golf course, the challenges that moose face to survive, efforts to control Canada geese, and the success of wild turkey reintroduction.

Her favorite part of her job was changing people’s minds about the concept of “nuisance wildlife.”

“It was gratifying to take someone who just wanted everything shot, everything removed (their attitude was, “It’s your wildlife, come get it”) to getting them to understand that this is a benefit of living here. We have all these wonderful critters that some people have never seen, living right around us. It’s kind of our job to police ourselves. I always thought it was a good thing if I could talk people down like that and get them to understand that wildlife is a gift instead of a nuisance.”

Minchak is still involved in estuary work, however, it’s on her own time and her own schedule now that she’s retired. (She retired in July 2022.)  “As my fly fishing buddies have said, it’s not really retiring, it’s re-firing, re-inspiring, rewiring. That’s totally what I’m doing,” Minchak said.

A video of Minchak’s presentation is available on the Lake Superior National Estuarine Research Reserve’s YouTube site. The Reserve is our River Talk partner.