The November River Talk featured a researcher and a youth panel who spoke to the theme: “Tell us what you Love About the River.” Molly Wick, a Lake Superior National Estuarine Research Reserve Margaret A. Davidson Fellow, described a study she designed to help environmental managers understand how the community benefits from local lakes, rivers and streams and how this work could help make those benefits more accessible to everyone. Afterward, a panel of three young people rounded out the discussion with their personal stories about why the St. Louis River is important to them. 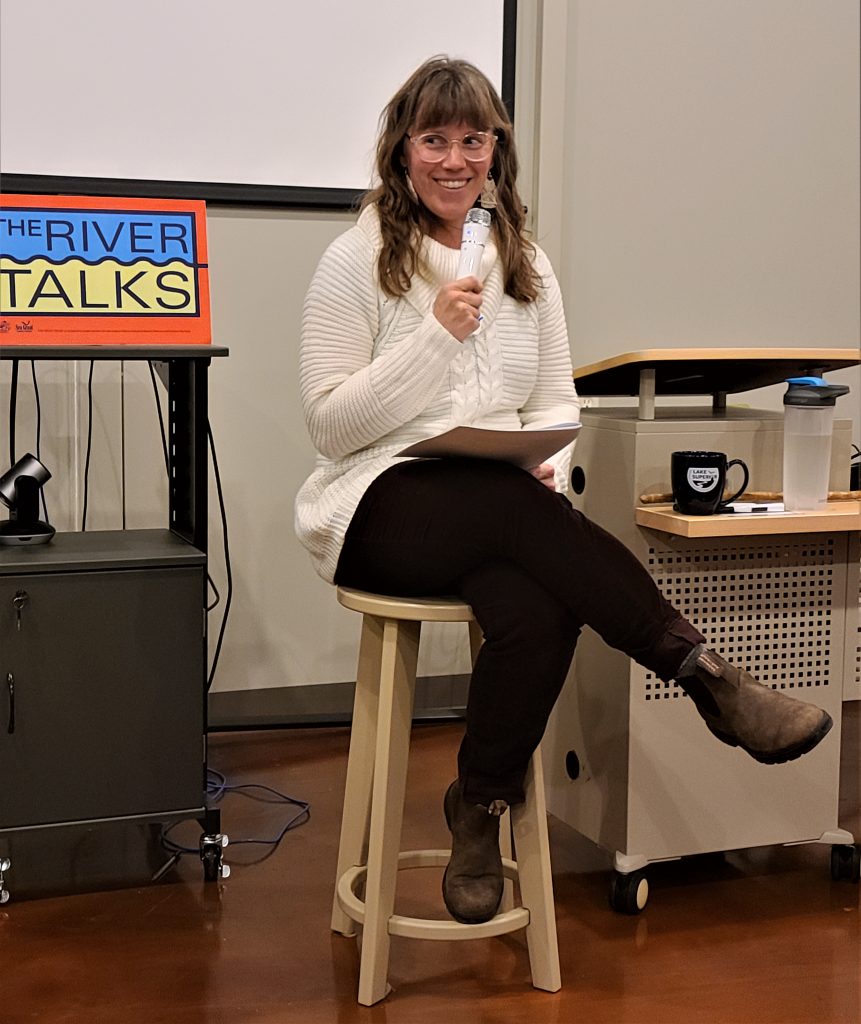 The Waterway Benefits study Wick is doing for her doctorate at the University of Minnesota Duluth is in the form of an online survey. Simply, she’s studying why people love the river. “That’s the simple version of it,” Wick said. “Of course, there’s a jargon term for it, too: Cultural Ecosystem Services.”

Wick said that Cultural Ecosystem Services is based on the same framework as Ecosystem Services, which is a method of quantifying dollar values on the benefits that people receive from nature. Examples would be how much money is saved by cities that have a healthy flood plain or how much money is saved by having trees that provide shade to homes instead of the homes needing air conditioning.

Wick grew up in Two Rivers, Wisconsin, a town on Green Bay on Lake Michigan that she categorizes as having a lot of water around it. Her family had a tradition of going camping most weekends. They traveled to many Wisconsin state parks and “Basically spent our days hanging out by the lakes.”

They swam, canoed, built sandcastles and foraged for wild foods. Wick said she even had her first romantic kiss on a beach, which is an example of an emotional benefit.

Audience members shared their favorite water experiences or benefits. Reserve Director Deanna Erickson said she lived near the Fox River near Oshkosh as a child. Her neighbor would catch gar fish and bring them over in a bucket for Erickson to see. “As a four- or five-year-old, I thought they were so cool!” she said.

Tom Nicodemus shared his memories of a heron rookery that used to be on Pokegama Bay in Superior.

The goal of Wick’s Waterways Benefits Survey is to help measure the benefits of habitat project investments made in the river to help inform future decision making.

“One of the things I hope to do with the data that I collect is be able to look at how different groups of people have different or similar experiences so that managers can use that information to make better decisions and make access to the water more equitable, as well. I don’t want to put different values on these experiences but raise awareness about what values people hold. Protecting these resources depends on having a better understanding and really getting some information about why we love the river into managers’ hands,” Wick said.

The youth panel was composed of Abbey Watt (ninth grader, Superior High School); Leah Gavin (ninth grader, Superior High School); and Jace Ludwig (fifth grader, Cooper Elementary). They added spirited emotion and energy to the room, which included support of their families and some teachers and friends. Their stories of river connection included humor, home, views of the estuary from bridges and “extra” benefits from activities like ice fishing—family time, eagle sightings and mishaps. All added emphasis with their voice, laugh or things they said that they didn’t initially write down. To get a flavor of the energy in the room as these young people contributed to the River Talk, the essays they read are below: 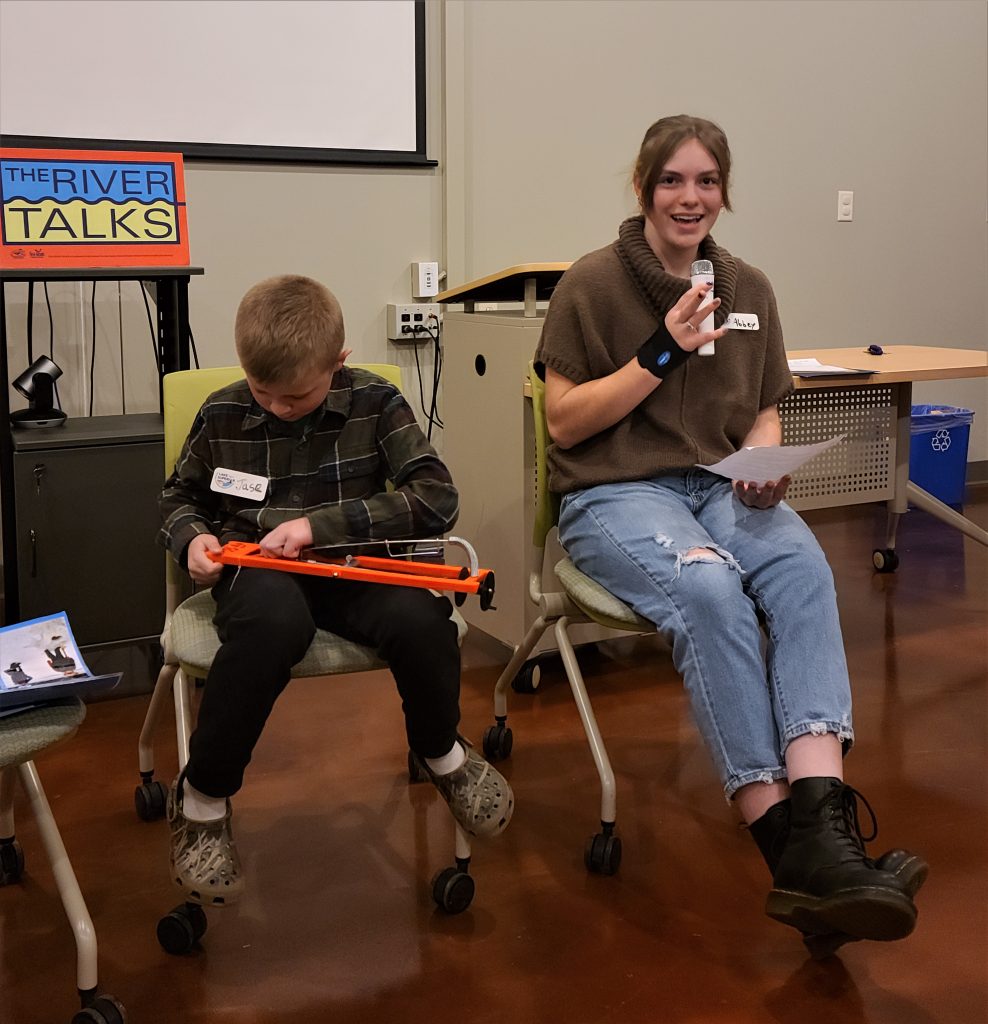 There are so many ways that the St. Louis River has impacted my life, whether from seeing its wild waters on my way to and from school or boating through them during the summertime. It connects me and my mom, it connects me and my dad, it connected me and my grandpa, just as it connects to Lake Superior, and I hope it will connect me and my children, though my mom says not for at least 10 years.

This past couple summers my mom and I have spent countless hours exploring and enjoying all the wonders the river has to offer. We would always make a day of it and pack snacks and lots of extra sunscreen. It is easy for us to lose track of time when relaxed by the rocking of the boat and the sound of the waves splashing against the sides.

When you’re on the boat, it transports you to a world where nothing really matters – whether you have an exam coming up, whether you have papers due, or just the stress of everyday life – none of that matters when you’re out on the lake or even near it.

My grandfather had been a big fan of fishing on the river, as well as boating, he would troll around just waiting for a fish to bite. Whether the sun was shining or it was super cloudy, it was always a great day to be on the water. Just spending time on the water was a gift in itself.

Every time we drive over the bridge, I take a minute to check up on the river and see how it’s doing that day. Some days the waves topped with white, other days I see only the gentle ripple of the current as the river flows to the lake. It is always a conversation-starter between me and my dad. My favorite view is early in the morning when the fog is still rolling over the bridge and the heat of the river is rising and swirling around. When we drive over the bridge and it is engulfed in fog, it makes me feel like I am in a movie. No matter what the weather is like, the river always glows with elegance and perfection.

Though the river is forever changing, it still feels the same to me. Whenever I come back from a trip, I always look out the window and try to catch a glimpse of the water. That’s how I know I am home.

Many of us, myself included, take our proximity to the river and the lake for granted. We have such an amazing abundance of fresh water running right through our back yard and it is our normal, but for some it is a dream waiting just out of reach. It is a wonder to be able to enjoy time at the beaches, smell the fresh scent of the water, and hear the crashing of waves.

Some ships pass through the river on the way to deliver cargo. It’s amazing to watch the go by, although it can take a while. Many species of animals rely on its clean water, and the fish depend on the bays and smaller streams to feed and seek shelter. 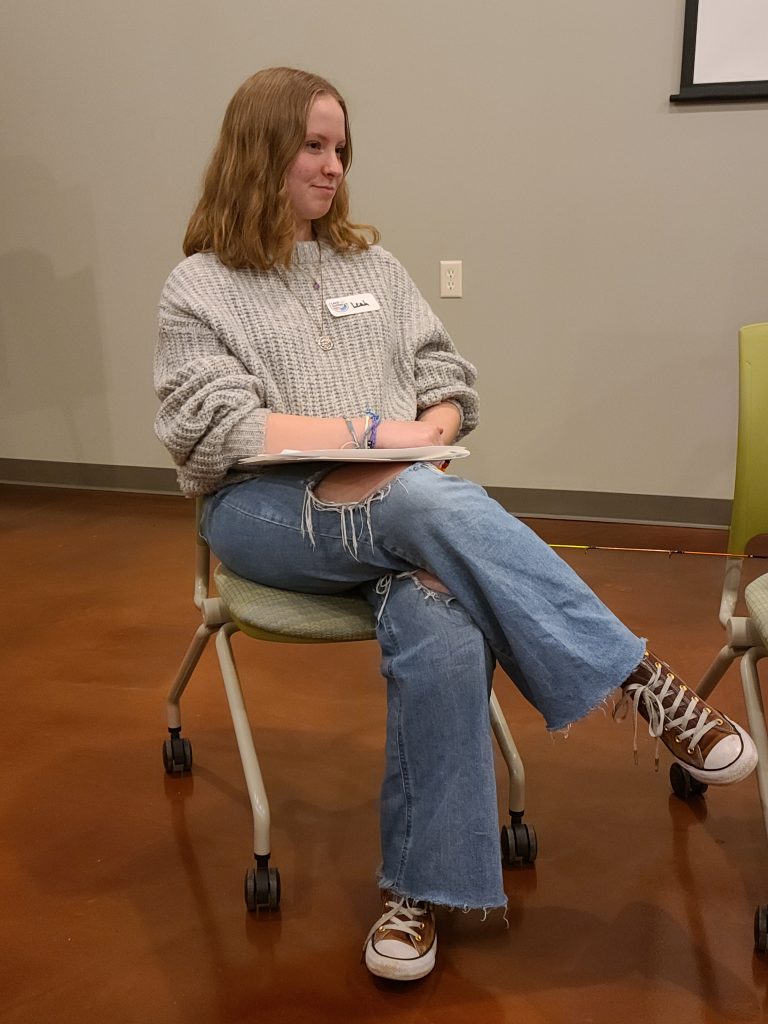 As someone who has lived in Superior their entire life, I have been around the St. Louis River a lot. But it wasn’t until recently when I was asked to think about it that I realized just how much the river actually means to me.

When I think of the St. Louis River, I think of the hot summer days spent out on my aunt and uncle’s boat. Cruising through the water, relaxing in the sunshine, parking to eat lunch as we listen to the water splash gently against the side of the boat, swimming when we get too warm from the sun, and wrapping up in our towels when we get too cold from the water. I look forward to days like those all year long.

I think of looking out over the river as we drive across the Bong Bridge, and the feeling of pure serenity the view gives me. I think of biking to Billings Park with my friends, taking pictures of each other as though we are professional photographers before sitting at the water’s edge to talk about everything and nothing, spilling our deepest thoughts to the river. I think of taking my younger cousins to the path alongside the water, attempting (and failing) to teach them how to skip stones, watching their curiosity, and trying to answer all of their questions about the world around them. I think of sitting by the river after my grandparents passed away, talking to them as though they could still hear me. And perhaps they could. I think of the early spring and keeping a close eye on the ice, making bets with my mother as to when it will finish melting. I think of leaving for road trips in the early morning, and watching the sun rise over the river, seeing its oranges, pinks, and yellows reflect on the water. Looking out and not being able to tell where the water ends and the sky begins.

What I love about the St. Louis is the peace it brings. The reassurance that no matter what happens it will be there tomorrow. I love the memories it holds, both big and small. I love the beauty of it. But most of all I love the fact that it is and always will be a part of my home. 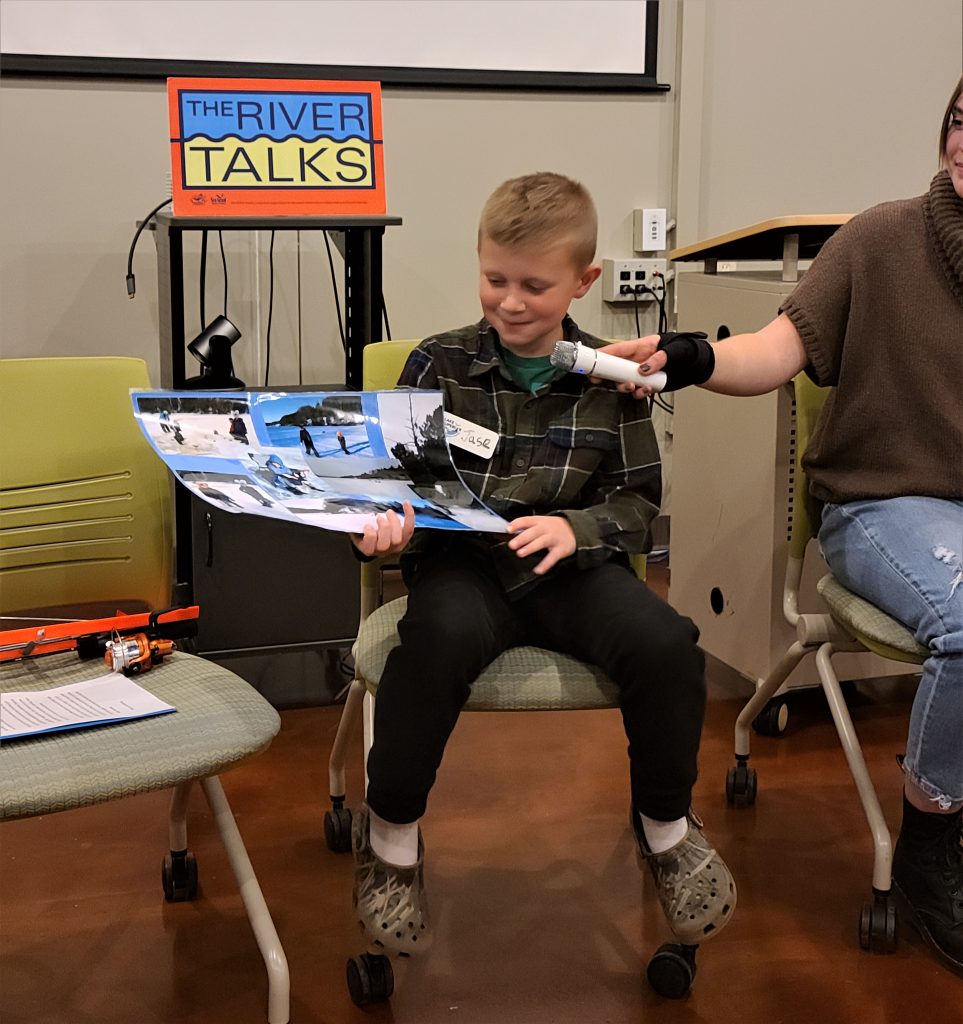 My family and I enjoy ice fishing on the river. We have made many trips out there over the years. We usually go to Kimball’s Bay. Sometimes we use our snowmobile to get onto the ice, and sometimes we make the long walk. We try to pick up any litter that we see on the trail and also on the ice. We don’t want that stuff to get into the river or lake. We also pick it up because once we saw an eagle eating bait that someone dumped out and we thought about how we didn’t want the eagle to eat garbage. We see eagles down there a lot. Once, one flew over our heads and landed on a tree right next to us.

We usually don’t set up our ice house when we fish there. We like to put up tip-ups so we can run around and play. My dad likes to jig for fish while we have snowball fights and go on adventures. Once, during a snowball fight, I stepped right into a hole all the way up to my knee. My boot filled with water and I was pretty soaked. Good thing it was a warm sunny day, or our day would’ve ended right away.

We like to explore different paths and trails around the water’s edge. And we really like to find big hills to use our sleds on. It isn’t fun to walk up the big hills, but it is fun to have a contest on who can make it out onto the ice the furthest. And we do all this while my dad catches perch and crappies. We love that we have this area to make great family memories.

Jace showed images after his talk, including the place where he stepped into the watery ice hole, a sledding hill, and the eagle he mentioned in his story.

The next River Talk will be, “Nimaawanji’idimin Giiwitaashkodeng: Working with Fire to Heal the Land on Wisconsin and Minnesota Points.” It will be an in-person and Zoom presentation by Evan Larson, University of Wisconsin-Platteville, and Melonee Montano, Red Cliff tribal member and University of Minnesota graduate student. They will describe a collaborative project that is bringing information from tree rings and oral history together to understand how the Anishinaabeg people used fire to tend the landscape and how the return of fire can contribute to both cultural and ecological restoration. Refreshments will be provided.

Here is the Zoom information:
https://uwmadison.zoom.us/j/92832940429?pwd=TUpJQWhucHB5cUxVQWxXQVF5b1ZIUT09