On a Wednesday night in Green Bay earlier this month, three friends reunited to help Wisconsin Sea Grant launch something new: a series we’re calling the Lake Talks. This series of informal talks in different communities near our Lake Michigan shore will touch on a variety of topics related to life in the Great Lakes region. (The name signals that it’s a counterpart to our River Talks, which take place in Superior and connect to the St. Louis River Estuary.) 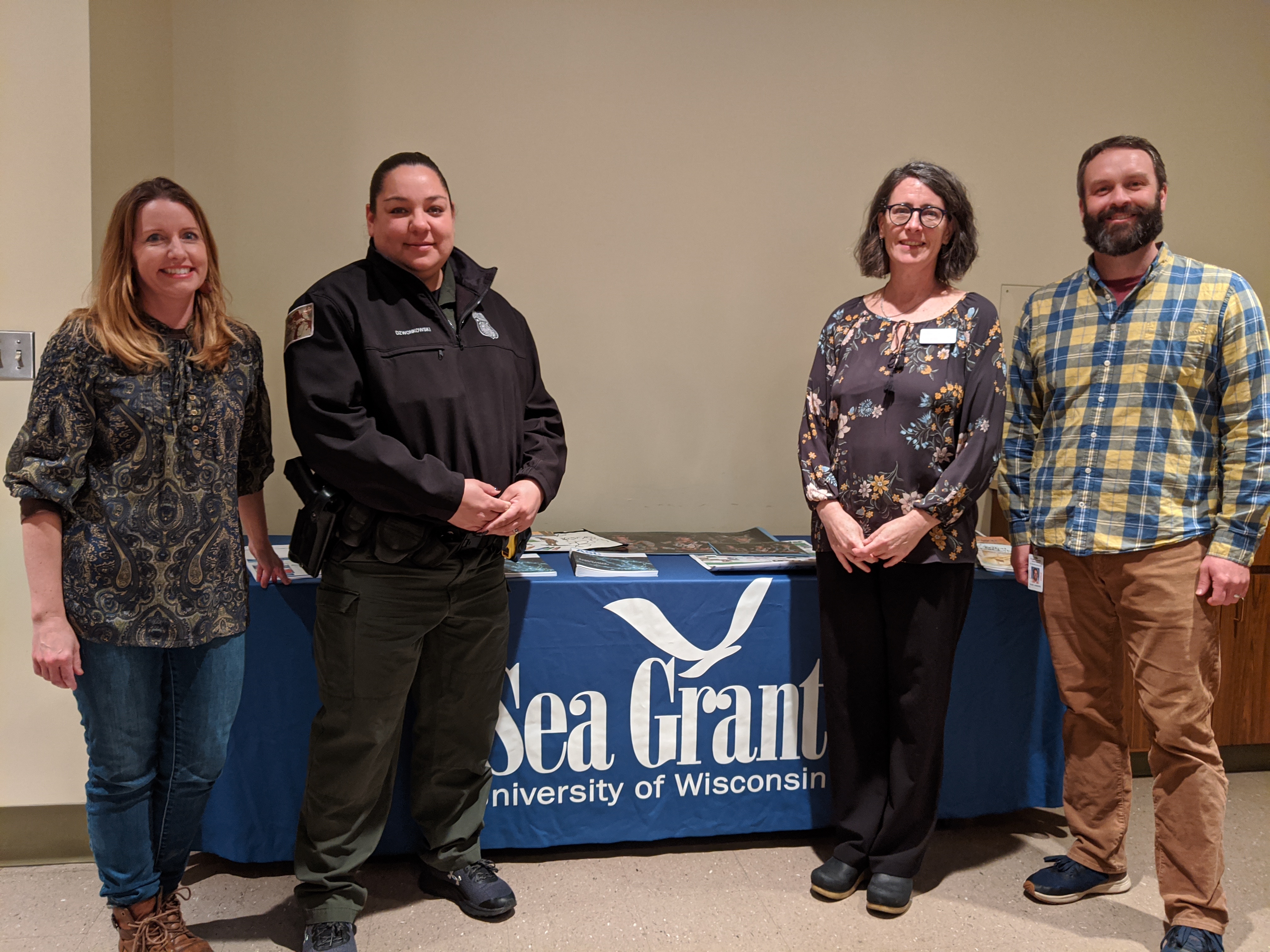 For the March 4 presentation at Green Bay’s Neville Public Museum, called “Setting Sail for Great Lakes Learning,” our speakers were Christina Dzwonkowski, Kelly Koller and Dave Landers. The latter two are teachers in Howard-Suamico and Pulaski, respectively, and Dzwonkowski is a conservation warden with the Great Lakes Indian Fish and Wildlife Commission (GLIFWC) whose job also includes educational duties, such as sharing with kids a “Critter of the Month.”

All three sailed Lake Superior in August 2019 aboard the Denis Sullivan, a replica 19th-century schooner. Their purpose was a shipboard science workshop. This professional development opportunity for teachers and informal educators helped build a network among them, and also gave them fresh inspiration to take back to their classrooms and other settings.

Anne Moser, senior special librarian at the Wisconsin Water Library, also sailed aboard the ship and introduced the three panelists.

The trio’s presentation was both serious and lighthearted. All three expressed wonder at how small one feels when navigating the waters of an inland sea, gazing up at the stars. But they also talked about little victories aboard a vessel with limited personal space, like getting the toilet to flush or coping with sometimes unpleasant smells that were hard to escape from sleeping bunks near the facilities.

Koller began the talk by mentioning a principle known as “Etuaptmumk,” or “two-eyed seeing.” The word is a Mi’kmaq one, and it guided the 2019 Denis Sullivan trip, which drew from both Western science and the traditional knowledge of the peoples who were the first inhabitants of the Great Lakes region.

Landers described the group’s route from St. Ignace, Michigan, to Duluth, with some memorable experiences along the way, such as learning from Karen Diver about treaty rights and tribal sovereignty. Diver served as President Obama’s Special Assistant for Native American Affairs and is a member of the Fond du Lac Band of Lake Superior Chippewa.

Dzwonkowski, the GLIFWC representative, is based in Odanah, Wisconsin, and is a member of the Bad River Band of Lake Superior Chippewa. She’s one of 22 wardens covering three states for the agency, which was formed in 1984. Her role combines law enforcement, conservation and education. She marveled at how she and her fellow sailors could feel like a family so quickly—despite the intensity of the trip, it lasted just six days.

All three echoed the importance of Great Lakes literacy and place-based education that helps kids and adults alike appreciate the amazing region we live in and understand it through more than one framework.

One resource that Koller recommended to the 35 or so attendees is the book “Braiding Sweetgrass: Indigenous Wisdom, Scientific Knowledge and the Teachings of Plants,” by Robin Wall Kimmerer.

Educators who are interested in going on the next shipboard science workshop may apply now (though, like everything these days, plans may be affected due to the ongoing COVID-19 situation). Applications are due April 6; find information on the website of the Center for Great Lakes Literacy.

We thank Dzwonkowski, Koller and Landers for sharing their experiences with us, and helping get the Lake Talks off to such a great start! We are also grateful to the Neville Public Museum for generously hosting us. You can read more about the Denis Sullivan trip in this earlier story in our online newsroom.

Barring any cancellations or delays due to the current public health situation, the next Lake Talk is scheduled for May 28 in Green Bay. “Green Bay: A Saga of Life, Destruction and Restoration” will feature two University of Wisconsin-Green Bay graduate student researchers, Cadie Olson and Brandon Falish.