As part of the River Talks series, Vern Northrup presented his five-year photography journey titled, “Akinomaage: Teaching from the Earth,” on March 3 at the St. Louis River Summit held at the Duluth Entertainment Convention Center. He explained how he was able to use photography to show connection between Earth and spirit and the relationship between sustainability, growth and fire.

Northrup got his start when he was asked five years ago to have an exhibit at Duluth’s American Indian Community Housing Organization. He was presented with his next opportunity when the Duluth Art Institute asked him to create an exhibit, which is his now photography book, “Akinomaage: Teaching from the Earth,” the first book the institute has published.

Northrup, a member of the Fond Du Lac Tribe of Lake Superior Chippewa, began his talk by explaining how the tribe finds their connection with nature.  “The way we look at everything out there is that everything has a spirit. Everything that has been created, the Earth, the moon, the river, the water, has a spirit, and that is how we treat them, one spirit to another.”

Having this deeper connection with nature led to the inspiration that lies behind Northrup’s photos. As he began showing the contents of his photo book, he provided the audience with insight into how these spirits have influenced the way tribal members live. Gitchi-Gami-zibi, also known as the St. Louis River, has been a major influence in their lives.

“In the water, there are mermen and mermaids. They love us so much, they want us to come live with them. Of course, we cannot, so we show our appreciation by making offerings to them, and in return, they protect us,” Northrup said.

This is only one example of many that have become integrated as a part of their lives. The sumac tree, milkweed buds and wild animals are a few more of the important integrated benefits in their lives, providing food, medicine and tools. Northrup showed one unique photo of red leaves on a tree forming a phoenix, representing a culture that is ever rising, and the adaptation that it takes to thrive. 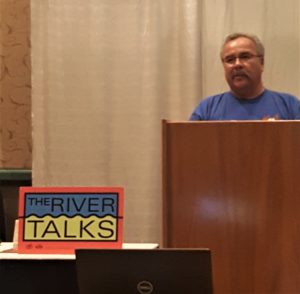 Northrup also worked with ishkode (fire) for a number of years and was invited to Stockton Island to return fire to sustain this part of the Apostle Island National Lakeshore. Northrup said the Anishinaabe used to burn there for thousands of years for blueberries. Island blueberries became a valuable trade item because of their varying, yet close, harvest time compared to berries on the mainland.

“The indigenous people in America had over 700 uses of fire to shape their environment. For whatever reason. It could have been anything from war, to cooking bugs, to everything,” Northrup said.

He added that the purpose for fires was to attract different types of animals at certain times of the year, to encourage blueberry growth, or to add nutrients for the wild rice. “Fire is a cleanser of the land and the air,” he said. By burning the land, they were able to encourage new growth of food and plants that otherwise had not emerged in years.

A member of the audience asked how Northrup chooses what to photograph. His response was, “Some days I go out there, and I tell myself to sit down and listen to what’s around me to try and learn something. I enjoy taking pictures of the woods here. I’ve spent my time travelling, and now the woods are where I want to stay.”

The April River Talk, “What Tourism Means for the River,” will be postponed until a later date due to the coronavirus (COVID-19). If you’d like to get on the email list for River Talk notifications, please contact Science Communicator Marie Zhuikov at mzhuikov@aqua.wisc.edu.