Blog > Greener and cleaner: how a marina takes big strides toward cleaner water 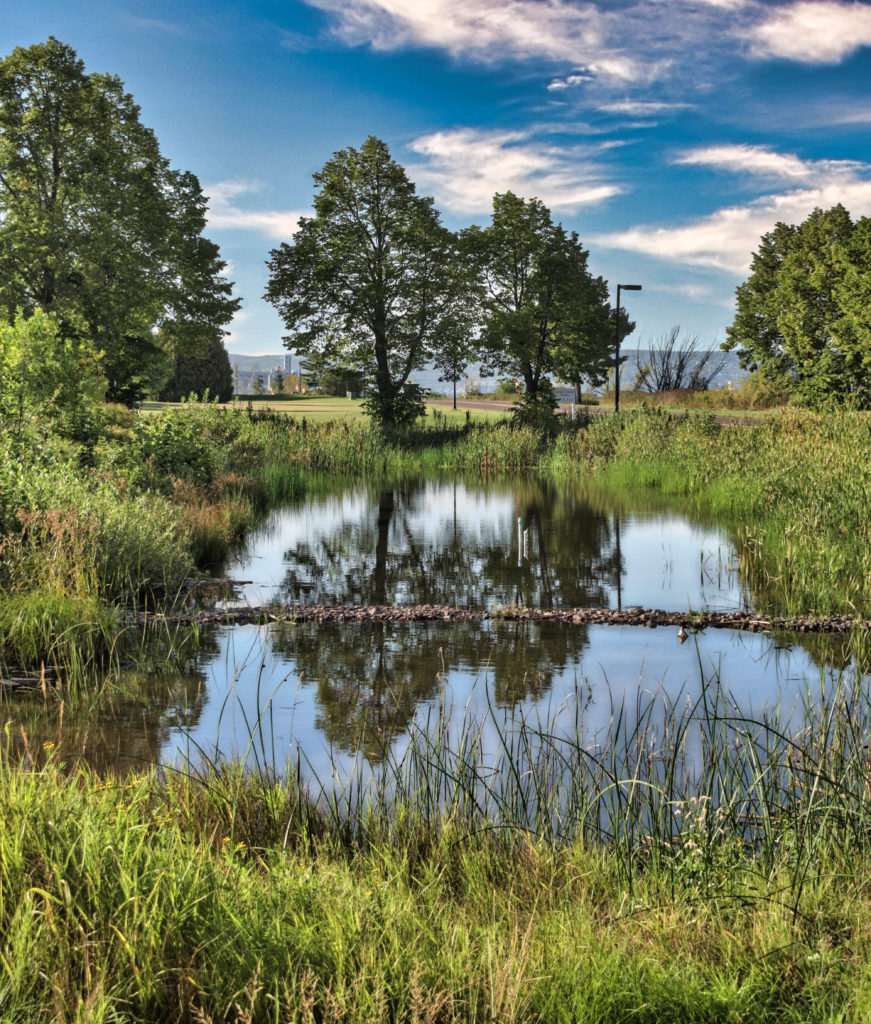 The new season of River Talks began in October with three speakers who described projects designed to control stormwater runoff and prevent pollution at the marina on Barker’s Island in Superior, Wisconsin.

Theresa Qualls with the Wisconsin Clean Marina Program, Eric Thomas with Barker’s Island Marina and Michael Krick with the city of Superior gave in-person presentations in the Lake Superior Estuarium. Their talk was originally scheduled to be an outdoors tour, but inclement weather changed plans.

Barker’s Island Marina has been working for several years on certification to become a Wisconsin Clean Marina. These clean marinas voluntarily go the extra mile to adopt measures to reduce pollution from their marina, boatyards and recreational boats. Designated clean marinas are recognized as environmentally responsible businesses.

Qualls began the presentation by providing information about the clean marina program. “Clean lakes and rivers are good for business. Boaters really care about the water resource,” said Qualls, coordinator of the program. “In addition, it creates a safer and healthier place to work and recreate, and it really can enhance the image of the marina among the community and among boaters.” 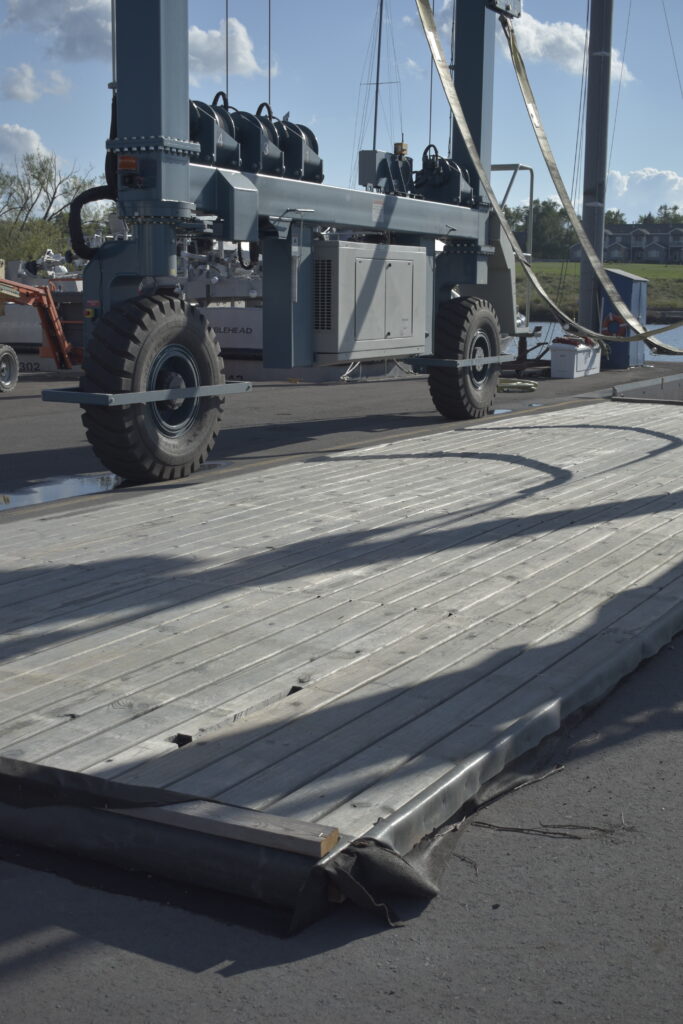 She said marinas are in a unique position to improve water quality because of their location near water. Earlier that day, she met with Barker’s Island Marina staff to finalize a plan for their certification. Once approved by a technical team and certified, Barker’s Island Marina will join 22 other clean marinas in the state. She said most of those are coastal marinas, but they are working to encourage more inland lake marinas to pursue certification.

Thomas said his marina wanted to be in the clean marina program because, “We have a ton of boats. We have a ton of machinery. All these boats are full of machines, engines, oil, grease – all kinds of yucky stuff . . . As somebody who has been on the Great Lakes all my life, and in the water my whole life, it’s so easy to make mess — we have to work really hard not to. But the rewards are huge.”

One thing the marina did to control stormwater runoff is to let native plants along the shoreline grow instead of continuously cutting them down. This also deters geese from walking onshore and defecating on sidewalks.

At the far end of the marina is a new boat wash station. When boats are lifted out of the water at the end of the season, the power wash water is collected in tub, filtered and sent to the sewage treatment plant. This keeps toxic boat paint residue from entering the lake. They also regraded the boat washing pavement so that rainwater drains into a new engineered wetland constructed by the city of Superior.

Krick described the construction process for the wetland, which contains a forebay and several cells to slow down stormwater and treat it via native plant processes. The outlet drains into the harbor. “It was really hard to grow anything this year, everyone’s aware of the lack of rain we had,” Krick said of the process to plant the wetland vegetation. “But the last month has been very nice in terms of getting vegetation established before winter. I’m fairly happy with the way it looks.”

Thomas added, “We’re able to treat an inch or inch-and-a-half of rain through the wetland effectively. So, when we get one of these good soakers, we’re not releasing anything immediately into the lake. It’s all getting filtered through this.” 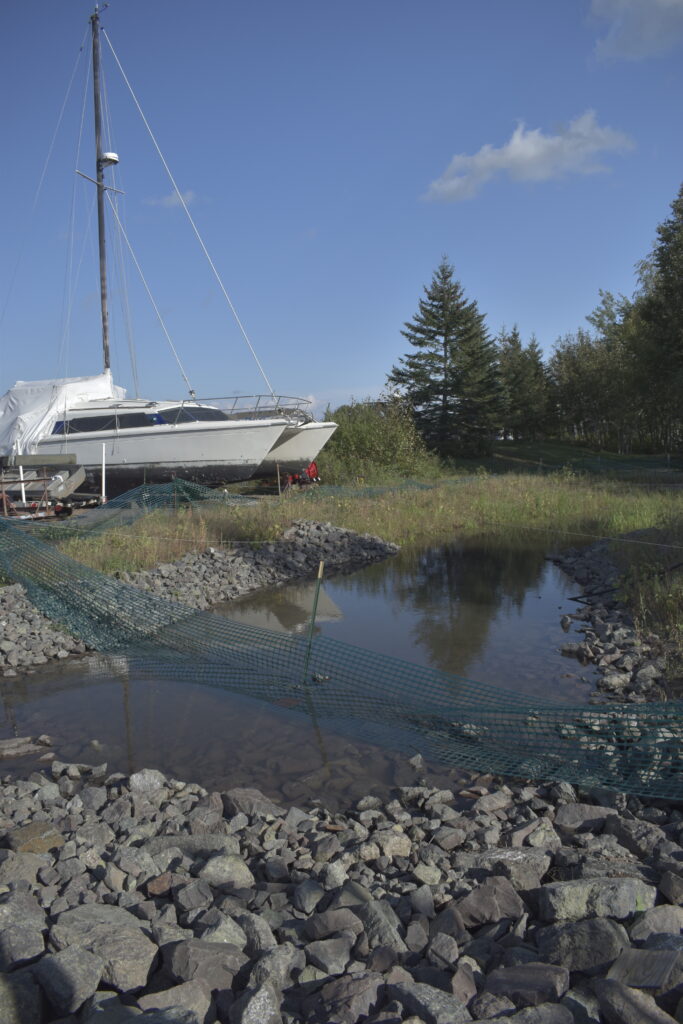 The wetland project was funded by the Great Lakes Protection Fund and engineered by The Ohio State University. Staff at the Lake Superior National Estuarine Research Reserve monitor conditions at the wetland and stormwater pond to ensure they are working properly.

The last improvement discussed was the marina’s stormwater pond, which is near the road. Because it had no outlet, the pond would often flood the marina parking lot during heavy rains, creating hazardous conditions.

The pond was retrofitted with a forebay to catch and treat the water, allowing sediment to settle. A pipe allows the water to flow into the bay once it gets high enough.

Barker’s Island Marina is one of three marinas in the states of Wisconsin, Michigan and Ohio chosen for installation of green stormwater infrastructure practices.

The Nov. 10 River Talk will feature Samuel Geer, president of Urban Ecosystems, presenting, “Revealing the Invisible: Experiencing and Interpreting the St. Louis River along Waabizheshikana (The Marten Trail).”  His talk will be via Zoom at 7 p.m.:

Other River Talks will be held Jan. 12, Feb. 19, March 9, April 13 and May 11, 2022. The March talk will be held in conjunction with the St. Louis River Summit and the date may change. For more information, visit the River Talks page.

The River Talks are sponsored by The Lake Superior National Estuarine Research Reserve and the Wisconsin Sea Grant Program.