Blog > Invasive Species: Then and Now

In 2022, Wisconsin Sea Grant will celebrate its 50th anniversary, marking five decades of work geared toward protecting ecosystems, addressing natural and economic disasters, supporting aquaculture industries, educating the public on related topics, and much more. Wisconsin Sea Grant has been a beacon of accurate, scientific information, and will continue to be so in the future.

To kick off the celebration, I interviewed Tim Campbell, aquatic invasive species (AIS) outreach specialist, to see how things have changed in his field in the past 50 years, and how he hopes they will progress. His story is first in an anniversary series we plan to continue on our blog. 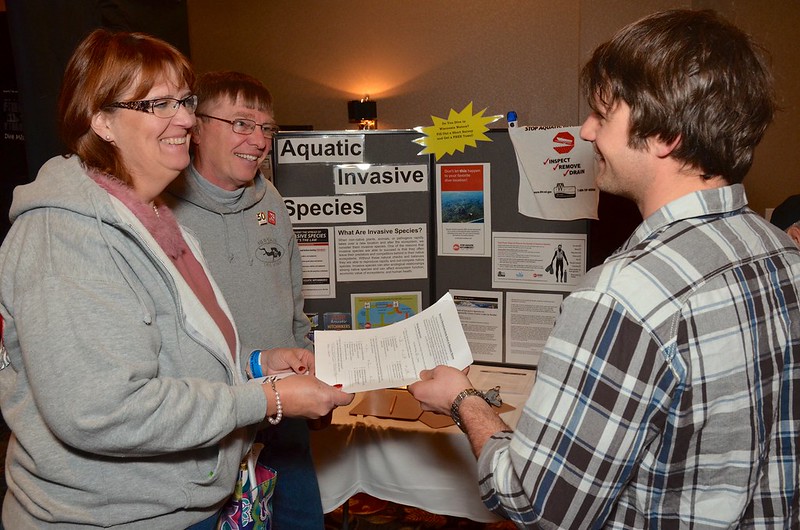 Campbell recounted a brief history of the study of invasive species: The creation of the Welland Canal, a human-made waterway that links Lake Ontario to Lake Erie in the mid-1800s sparked the idea of invasive species in the Great Lakes. Sea lampreys and alewives were able to travel through the Welland Canal into the Great Lakes, majorly impacting both people and fish.

While Great Lakes invasion science used to be primarily focused on managing sea lamprey and alewives for the benefit of commercial and recreational fisheries, Campbell noted that “now, what we think about in terms of invasive species in the Great Lakes and the Great Lakes region is so much more broad than just alewives and sea lamprey.” New invasive species like zebra and quagga mussels have expanded what requires management. Another task trying to be proactive in keeping other nonnative species from being introduced. Improvements in control programs give AIS managers alternatives and new prevention programs have helped reach wider audiences.

And while advancement in science and technology have bolstered our understanding of invasive species and the pathways they use to breach new areas, new pathways are continuously arising. Campbell cited online marketplaces as an example. These marketplaces, which allow customers to purchase species from anywhere in the world, have complicated AIS management in the past 10 years. Additionally, new segments of existing pathways – like recreational watercraft with ballast tanks – keep AIS managers readdressing pathways they thought were already sufficiently covered by their management plans.

“I think we’re starting to get more specific with pathways and how we can focus less on the actual invasive species and more on the people using the pathways – how we can work with them to stop unintentionally moving plants and animals around,” Campbell said. He went on to mention that “as we have gotten a better handle on some pathways, new ones are also emerging. We need to be aware of how these pathways function, how these species and goods are moving around, and how we can make sure that only things that we want are being introduced into the environment.”

So where does invasion science go from here? Through the eyes of Campbell, the “limiting factor” of his field is often not new biological facts about invasive species, but rather “getting people to understand the impacts of their actions and getting them to take action.” In terms of progressing the field of invasion science, Campbell has high hopes that the approach of shifting toward social science and trying to incorporate more of it into invasive species management will bode well.

“In the next 50 years, I hope we keep going down this track of interdisciplinary work and trying to use all of the different scientific disciplines to address our problems” in order to, “leave no stone unturned for potential improvements,” Campbell said.

When asked for final comments, Campbell left me with this: “It [the Sea and Land Grant College approach] has historically been very important in managing our agricultural problems and natural resource issues, and I think we will be even more important in the future because of where we sit between science and communities. Especially in this age of finding anything on the internet, no matter the accuracy, I think that it’s important to have this trusted source of scientific information to help communities make the best decisions possible.”