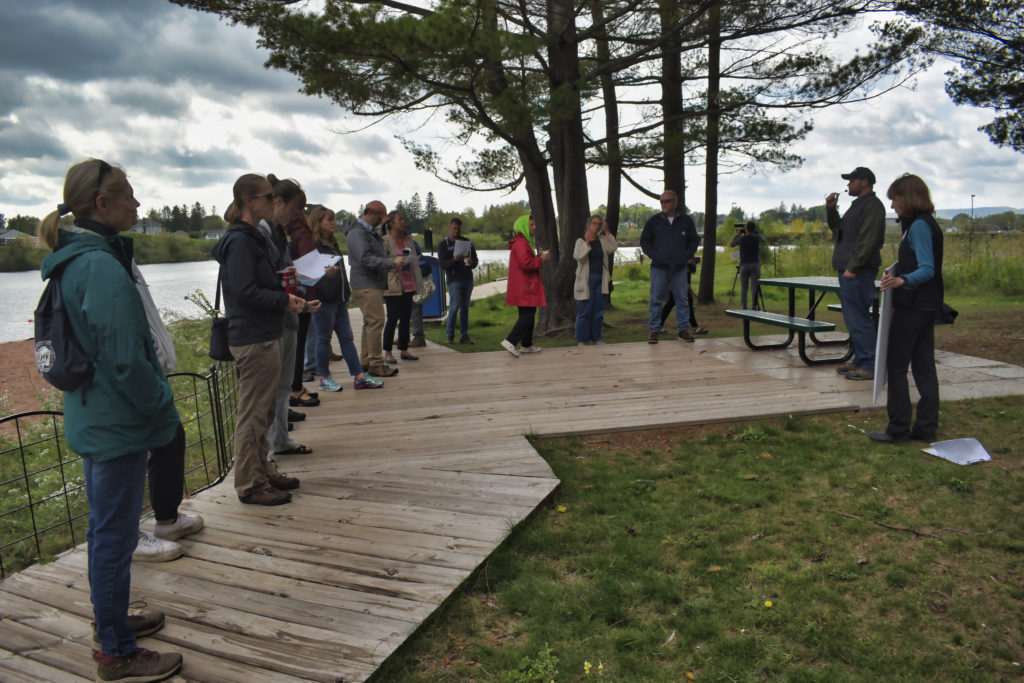 Last week, I joined a walking tour to check on the progress of projects designed to improve the environment on Barker’s Island in Superior, Wisconsin. After a welcome at the Lake Superior Estuarium by Jim Paine, the mayor of Superior, we hoofed it over to Barker’s Island beach. Although most of the work on the beach was done back in 2019, progress is still being made.

Native plants that replaced invasive buckthorn bushes were thriving and in fine color. Yellow sunflowers and purple bottle gentians lined the raised boardwalk along with many other grasses, flowers and shrubs. Our tour guides from the Lake Superior National Estuarine Research Reserve (Reserve) and the Wisconsin Department of Natural Resources (DNR) pointed out porous concrete underneath the picnic tables and pervious pavers in the parking areas along the street. These are designed to allow water to soak into the ground instead of running directly into the lake, which diminishes pollution. 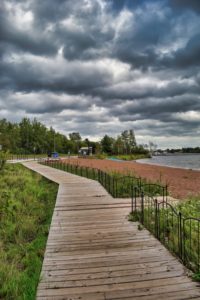 Matt Steiger with the Wisconsin DNR said the changes are working. Before the improvements, the E. coli bacteria amount exceeded standards 42% of the time for the summer season in 2015 and 2016. After the project was completed in 2020, E. coli exceedances dropped to only 8%.

The second area we visited encompassed the charter fishing dock parking lot and the Barker’s Island Inn lot and tennis courts. Funded by a grant to the city of Superior from the National Fish and Wildlife Foundation’s Sustain Our Great Lakes Program, progress on these projects has been slower than anticipated because of the many challenges brought about by the COVID pandemic.

However, city staff expect ground to be broken in the spring of 2022 on medians in the parking lot, which will be planted with native trees and shrubs to slow water runoff. The tennis courts behind the inn will be turned into a green space, and the paved walking path across from the inn will be extended.

Our next stop was Barker’s Island Marina. Manager Eric Thomas showed us the many improvements completed this spring thanks to several grants and cooperation among Sea Grant programs in Wisconsin, Michigan, and Ohio, as well as the City of Superior, the Wisconsin Coastal Management Program, The Ohio State University, and the Wisconsin Marine Association. These include a rubber mat that catches toxic paint chemicals and biofouling organisms when boats are removed from the water and washed at the end of the season. 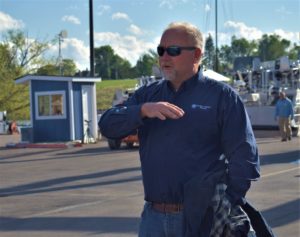 Pavement at the marina has been replaced and regraded so that it drains toward a new engineered wetland along its edge. Todd Breiby with the Wisconsin Coastal Management Program explained that the wetland includes a forebay, which catches the pavement runoff and allows contaminants to settle. Then the water moves into a basin filled with plants, which filter the water, and then into another plant-filled basin, before emptying into the bay.

Breiby and Thomas then walked us closer to the road to the marina parking lot stormwater pond, which was retrofitted to make it function better. The pond used to flood the lot because it had no outlet, so a culvert was added that allows water to drain into the bay once it reaches a certain level. A forebay was also installed, which captures sediment coming off the marina parking lot and improves water quality.

To ensure these new marina improvements are doing their job cleaning water, researchers from Ohio State and the Reserve are monitoring water quality and noting “before” and “after” changes. 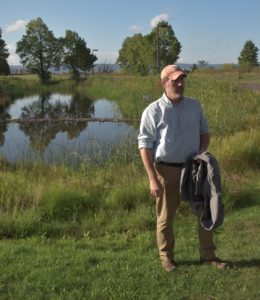 Walking back to my office (which is on Barker’s Island) at the end of the tour, I was struck by how things that look so natural, like the wetland and the pond, can do such a good job of cleaning water if we give them a chance.  Although some had only been put in this season, they already looked like they’d been around for years. It’s good to know that these features are in place and working, and that they’ll serve as examples for other communities and marinas to try.