The February River Talk featured Alexis Berke with the Great Lakes Aquarium presenting, “A virtual visit: Explore the St. Louis River exhibits and animals at the Great Lakes Aquarium.” Berke, director of learning and engagement, offered a mini-guided tour of the St. Louis River exhibits at the aquarium designed for all ages. Along the way, she spotlighted some of the estuary residents and highlighted ways aquarium staff members work to make visits to their facility an inclusive experience. 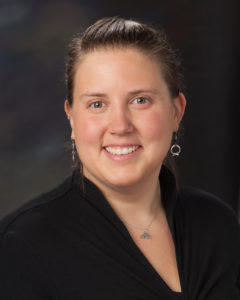 “Each of the exhibits we’ll be visiting today are designed for animal care purposes,” Berke explained. “None of these animals exist alone – in nature, the ecosystem is not as separate as we’re going to see here today. Each of the animals, each of the plants, each of the people all work together to make this really rich landscape along the St. Louis River.”

Her energetic tour started with skunks, worked its way to turtles and ended with sturgeon. Berke gave viewers an inside look at the skunks’ log home. The animals did not much care for the intrusion – one of them started to raise its tail. Berke assured viewers that the skunks’ sulfurous scent glands had been removed.

“Skunks don’t really have that bad of a smell. It’s the chemistry of our noses that amplifies it,” Berke said. “Skunks are good neighbors. They tend to keep populations of unwanted pests under control – grubs, ant eggs and mites.”

The St. Louis River exhibit is home to several species of turtles, including painted turtles, a Blanding’s turtle and snapping turtles. One of Berke’s favorites is “Crush,” a 50-pound snapping turtle. He’s lived in the aquarium for seven years. Berke explained how snapping turtles are better adapted to life in the water than on land. For instance, they have developed long necks to help them reach the surface of the water to breathe air. Berke has never seen Crush on land in his exhibit.

“The St. Louis River has a really rich fishery. Human activities have impacted spawning areas and hatcheries, but restoration projects have brought back some of those habitats,” Berke said. Sturgeon are one such success story. Their numbers have begun to recover, and they have successfully spawned in the river during the past decade.

Berke said sturgeon are large and long-lived. They can grow up to eight feet long and females can live to 150 years. They don’t mature and breed until they are 20 years old. Restoration programs for them are still in play.

To make the tours accessible for all, the aquarium hired an inclusion coordinator in the past, who developed tactile tours for people with impaired vision. Berke is carrying on that work today. “What that means is we have our interpretive staff trained to use really descriptive language. We have some braille books and audio recordings people can check out from the aquarium. Some of the coolest stuff we have are props that allow visitors to understand what the animals are like without using their sense of sight,” said Berke. These props include a taxidermized wood duck, plastic models, a trout and a wood turtle. People interested in a tactile tour can call head to arrange one.

A video of Berke’s talk is available on YouTube here. The next River Talk will be held March 3 in conjunction with the St. Louis River Summit. The topic is “A River of Poems.” Poets from around the world and across the country will share their works about rivers.