Blog > A “River of Poems” spans the world

We expected only a few local poets would be interested. We thought they’d offer poems about the St. Louis River. That was our mindset when the River Talk planning team first developed the theme for the public poetry reading to be held in conjunction with the St. Louis River Summit as an evening program in March. We were mistaken, but in the best possible way. 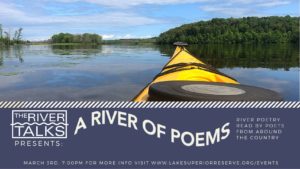 In reality, our call for river poems through the literary submission management platform Submittable garnered interest from 76 poets from across the U.S. and around the world. They submitted 148 poems for consideration.

“As it turns out, a lot of people like to write about rivers. That’s because they are really important in our communities and in our lives,” said Deanna Erickson, director of the National Lake Superior Estuarine Research Reserve, which co-sponsors the River Talk series with Wisconsin Sea Grant.

We quickly realized we were going to need more judges. In the end, we gathered six who represented a good cross-section of the audience we expected to attend the summit.

The judging was “blind,” which means the poets’ names were not associated with their poems. After two rounds, the judges narrowed the number of poems down to a dozen, with a few for backup in case any of the chosen poets could not be reached.

Although communication was sometimes a challenge, all 12 poets were enthusiastic about participating in the reading. They represented a wide diversity of ages and ethnicities.

The River Talk was several days ago, but the warm fuzzy feelings it engendered remain with me. I could use many adjectives to describe it: powerful, beautiful, stark, raw, funny — but it’s really best if you listen to the poems and feel all the feels for yourselves. The reading drew 85 Zoomers, a record attendance.

The Lake Superior Reserve, our partner in the talks, recorded the reading and it’s available on their YouTube channel. Here’s a list of the poets (in the order they read) and the names of their poems:

Ironically, the one poem specifically about the St. Louis River was written by someone who had never visited it. Rebecca Nelson said her poem, “Of the St. Louis River” was inspired by the spiritual experiences she’s had while watching water. She grew up in the Midwest and said she wrote the poem thinking of the rivers she knew from childhood. “I would love to visit sometime after the pandemic!” Nelson said.

Barb Huberty, St. Louis River Area of Concern coordinator for the Minnesota Pollution Control Agency, offered this comment in the Zoom chat, “I never knew that poetry could unite people across the globe.”

Sharon Moen, Eat Wisconsin Fish outreach specialist for Wisconsin Sea Grant, offered, “Thank you to all the poets and organizers! I am inspired by the depth of your thoughts and stories.”

Remaining River Talks will be held on April 14 and May 12. For more information, visit the River Talks page: go.wisc.edu/4uz720.