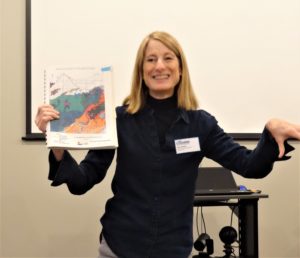 Although there are 700 types of soil in Wisconsin, Anklam explained the soils in Douglas County are mainly clay, thanks to deposits made by the glaciers in the distant past.

Soldat said the U.S. Department of Agriculture offers an online soil map of the country where people can find information about the soils in their area. “It’s an amazing resource,” Soldat said. “No other country has a resource even close to this.”

Because it is difficult to change soil composition, he does not recommend trying to do that in order to grow a specific plant over a large area. “You either need to grow it somewhere else or find a different plant that works for your soil.”

However, he said it is possible to change small areas of soil. Also, raised beds are a way to get around soil problems in your area.

Anklam recommended people test their soils through the University of Wisconsin Extension. The test provides information about pH, organic matter, phosphorus and potassium. The cost is $15. Another test is available for $15 for lead levels.

Audience members asked about composting. Soldat said compost is good for compacted soil. Coffee grounds are great for compost piles because they are high in nitrogen, he added. Anklam said that in addition to compost, adding well-aged manure, dried leaves or straw is helpful for soil.

Two issues of concern discussed during their talk were jumping worms and lead contamination. Anklam explained that jumping worms are an invasive earthworm originally from East Asia. They reproduce quickly and damage soil and plants wherever they are found. Jumping worms (Amynthas spp.) were first seen in Wisconsin in 2013 and are working their way north. They are easy to tell apart from other earthworms because the ring around their middle (the clitellum) is flat and white compared to the pinkish rounded one on common European Earthworms.

“The number one thing right now is knowing where they are,” Anklam said. If people see one in Douglas County, she asks that they collect it in a plastic bag and tell her (jane.anklam@wisc.edu). 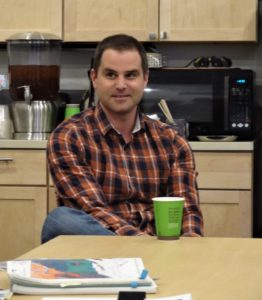 Soldat said that the incidence of lead in the soil is usually higher in urban areas near older roads. He said there’s “no safe blood level of lead for children,” and that parents should be aware of this if gardening with children in urban areas. He explained that lead exposure is usually from inhaling dust from soils, not from eating vegetables grown in contaminated soil.

Lead and other heavy metals can also be found in mulch and compost, which are unregulated unless they come from a waste-processing facility like the Western Lake Superior Sanitary District. If the bag of mulch is not labelled with such information, people can have the contents tested themselves by a lab.

The final question came from an audience member who was wondering if it’s all right to use St. Louis River sediment on gardens. The speakers did not recommend it since the river has historic contamination issues.

The next River Talk will take place at 7 p.m. on May 8, also at the Estuarium. Associate Professor Lorena Rios Mendoza from the University of Wisconsin-Superior will discuss results from contamination monitoring efforts on Newton Creek in Superior, Wisconsin.

River Talks is an informal monthly series about the St. Louis River Estuary hosted by the Lake Superior National Estuarine Research Reserve and the Minnesota and Wisconsin Sea Grant programs.