Blog > Spring Thaw Throwdown: On to the championship round!

By Sara Fox and Tim Campbell

Welcome to the final round of the Spring Thaw Throwdown Least Wanted AIS Tournament. Thank you to all who voted in our Twitter and Facebook polls recently. Don’t forget to vote this week to see who will take home the title of Least Wanted AIS in all of Wisconsin!

According to our Twitter poll, zebra and quagga mussels crushed phragmites with 90% of the votes. Keep in mind that this win was no Cinderella story. In fact, this was a pretty evenly matched round, which makes the results all the more surprising.

While zebra/quagga mussels live only in the water, and phragmites lives a bit more terrestrially in wetlands, both competitors’ geographic distributions across the state are relatively similar. It’s pretty obvious after this week that zebra and quagga mussels must have caused a real nuisance to lots of viewers’ watercraft vehicles, docks and maybe even feet. While we’re sad to see phragmites go, we’re intrigued to watch zebra/quaggas put some mussel into the championship game. 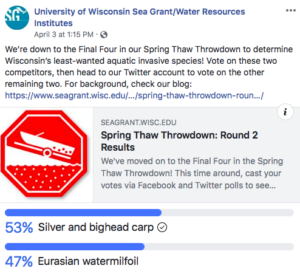 It’s no surprise these two competitors made it to the final round, but their performance in the championship really depends on luck and skill. While zebra and quagga mussels have really irritated people all over the state, silver and bighead carp tend to concern Wisconsinites with their potential for impact.

Few viewers will have had the misfortune of witnessing both species in the same waterbody, but most of us might have a stronger familiarity with one over the other. If you plan to vote this round, it may be useful to take a quick look at each competitor’s individual advantages first. 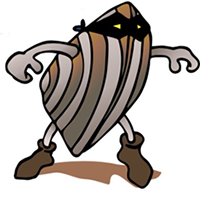 This may be a review for those of you who have been following the tournament closely. If you’re just joining us, read on! First up, zebra mussels are found in nearly 250 lakes in Wisconsin, while the quagga mussel has yet to bring its invasion game inland and is limited to the Great Lakes. The invasive mussels compete with native mussels and macroinvertebrates by filtering the available phytoplankton. They’ve also been known to clog watercraft intake pipes and foul docks and other hard surfaces in a waterbody.

Next up, silver and bighead carp are filter feeders that outcompete native fish species for food at the bottom of the food chain. Both fish can get to be quite large, with silver carp exceeding 60 lbs. and bighead carp topping 100 lbs. While they haven’t yet made a strong presence in inland lakes, they maintain a presence along Wisconsin’s western border and are threatening the eastern border.

Be sure to vote!

Your voice in this competition has never been more important. The winner of this match-up takes home the title as Least Wanted Aquatic Invasive Species in ALL of Wisconsin! Even if your top pick hasn’t made it to the end, don’t hesitate to weigh in on which of the two remaining will win it all.

We look forward to seeing you next week to reveal the winner of the Spring Thaw Throwdown!