The macrophye regional is stacked with talent. For many of these species, we are going to see a style of play that involves crowding lakes and rivers that can really limit the space native species have to operate while also making it difficult for all of us to enjoy some of our favorite activities. We’ll have to wait and see how these similar styles affect the gameplay of the tournament – will a mainstay of the AIS field ride their years of invading Wisconsin to a Final Four berth, or will a newer macrophyte that floats or uses bulbils storm to victory? 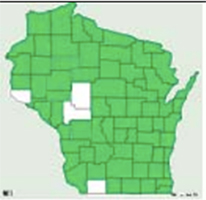 Eurasian watermilfoil has recorded invasion wins all over the map. It currently is found in almost all of the continental United States, and certainly established a presence in Wisconsin, reported to be found in 828 lakes and rivers! 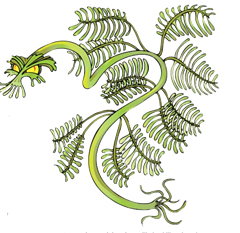 Eurasian watermilfoil has a proven track record of invasiveness, and will definitely be a favorite in this year’s tournament. It can be controlled  manually and chemically, but your best bet to keep it out of your lake is to prevent the spread of Eurasian watermilfoil by draining water from recreational water equipment, checking for and removing it from equipment upon exit and entry, and never moving plants, animals, or water to or from a waterbody. 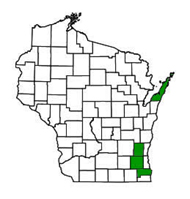 Starry stonewort, a rookie in this tournament, is a macroalgae that produces a star-shaped reproductive structure called a bulbil. Its branches are arranged in whorls with 4-6 branchlets of irregular length. The entire structure can grow as tall as 7 feet. Its roots, called rhizoids, are clear like fishing line and anchor it into the sediment. You can find starry stonewort in stagnant or slow-moving water.

As you can see, starry stonewort hasn’t been a prolific winner in Wisconsin recently. It has been documented in 16 Wisconsin locations and is confined to just 5 counties. We hope AIS staff and partners can keep it contained to these relatively few locations. 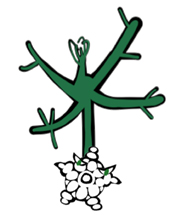 Once it enters a waterbody, starry stonewort puts a full court press on the benthos and can block the bottom like a carpet, crowding out native plants and animals. Its dense growth can inhibit boat passage and prevent water activity.

It might be new to Wisconsin, but starry stonewort’s risky potential has earned it a spot in this tournament. Control methods for starry stonewort have shown limited effectiveness so far, so the best way to manage starry stonewort is to prevent its spread—for example, by cleaning recreational water equipment before leaving a waterbody. It is especially important to remove mud from equipment, like boots and anchors, where starry stonewort’s bulbils might be hiding. This team is definitely one to watch and could be poised for a long run into the tournament. 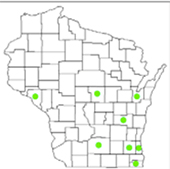 Water lettuce and Water hyacinth are wildcards in this year’s tournament and a trendy pick among some AIS professionals. These floating aquatic plants have some wins together, some wins alone, have victories dotted all over the map, and have overcome some tough winters to show up in locations multiple years in a row.

You can identify water lettuce by thick, soft leaves that are covered in tiny hairs. Its leaves are grouped in rosettes and have no stems. 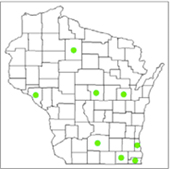 Its roots dangle below the floating leaves. You can identify water hyacinth by its thick, waxy leaves also arranged in rosettes. Water hyacinth develops lavender blue flowers and like water lettuce, water hyacinth has roots that hang below.

If these plants can get their act together, they hold potential to quietly sneak past the other macrophytes. A light breeze can move these plants across a body of water to start a new population. Both plants can grow very quickly and cover the surface of the water, which can make boating and fishing difficult even in less than a year of growth.

Two things that might be holding these plants back from a deep run into the tournament is Wisconsin’s climate, and Wisconsin’s ability to defeat these plants when they show up on the landscape. Some pundits question water lettuce and water hyacinth’s ability to survive and reproduce in a cold Wisconsin winter since they are native to warmer regions, but in some Wisconsin locations, they have appeared multiple years in a row. However, it is unclear whether these plants were reproducing via seed to sustain these populations, or if they were sustained through multiple introduction events. 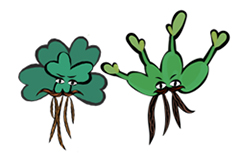 Wisconsin has also successfully managed all of the water lettuce and water hyacinth introduction events that have been discovered. Coordinated hand removal efforts have eradicated it from introduction sites, but not without the large amounts of effort from staff and volunteers (more info here and here).

While both plants are currently illegal to sell and possess in Wisconsin, they are marketed and available elsewhere as water garden plants. You can prevent their spread by making sure to use only noninvasive plants in your water garden (find alternatives here). Additionally, it’s important to never release unwanted aquarium and water garden plants or water into natural waterbodies. If everything falls into place–and we hope it doesn’t–this could be their best season yet. 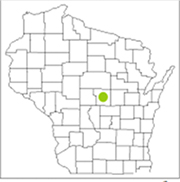 An outsider’s pick for the macrophyte field, Brazilian elodea is a submersed aquatic plant that can be either free floating or rooted. Its leaves are arranged in whorls of four to six and have finely serrated edges. When it flowers, you’ll see a white flower not more than an inch wide peeking above the water. Brazilian elodea can be found in turbid or still water.

We’ve seen some road wins from Brazilian elodea but it’s been struggling to make a name for itself in Wisconsin. Brazilian elodea is native to South America (Brazil, Uruguay, Argentina) and it has only been documented once in Wisconsin, where it was quickly snuffed out by intrepid DNR staff and AIS partners. It spreads most easily via the aquaculture trade and when it fragments, it can become multiple new plants, making it highly invasive and earning it a spot in this tournament. 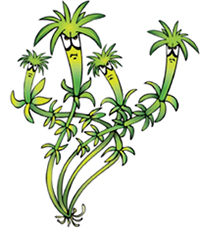 If you like to boat, watch out for Brazilian elodea! This plant makes boating and fishing difficult, and can also reduce aesthetic enjoyment.

The selection committee viewed Brazilian elodea as a bubble team, but they placed it on the right side of the bubble as it has potential to quietly improve its invasive status in Wisconsin. Some classroom curricula call for this NR40 prohibited plant, creating some demand for it among teachers (find alternatives to it here).

Once present in a waterbody, it can easily fragment, making Brazilian elodea hard to control mechanically. It’s best to take preventative actions to make sure it doesn’t spread into your favorite waterbody. For example, remove plants and mud from recreational water equipment upon exit and entry. You can also prevent the spread by draining water from equipment and cleaning/drying any equipment that comes in contact with water.

Most importantly, purchase noninvasive plants for your classroom, aquarium and water garden, and remember to never release unwanted plants into a natural water body.