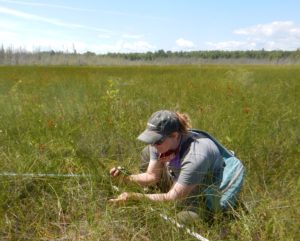 Beaster and Schwarting have spent the past five years monitoring the health of local wetlands along Lake Superior, including those in the St. Louis River Estuary. They described the formation and function of coastal wetlands and how they change over time. They focused on vegetation, covering the more common plant communities and some of their unique species as well as how wetlands have adapted to the short-term and long-term flux of water levels in the Great Lakes.

Schwarting said sediment is key to wetlands formation. “Sediment can come from tributaries along Lake Superior, but it can come from shoreline erosion, as well. Plants eventually start to grow. This stabilizes the sediment and encourages more sediment deposition and plant growth.”

Beaster described the three classifications of coastal wetlands. All three are low in nutrients (oligotrophic) due to the northern climate and cold water in Lake Superior when compared to the other Great Lakes. The first type, lacustrine wetlands, tend to form near large open lakes, such as Lake Superior. The second, riverine, form at and along river mouths. Barrier wetlands are separated from the lake by some type of barrier like a sandbar or a railroad bed.

Schwarting said wetlands function as carbon storage locations, which is helpful with climate change. The cold water, especially in lacustrine wetlands, limits decomposition. Wild cranberry, pitcher plants and bog buckbean are common species they find in their surveys. Although they are not rare, Beaster said these species are among some of the first to disappear from wetlands when nutrient loading occurs or the water level changes. “Some type of disturbance happens and the diversity starts to drop down.” 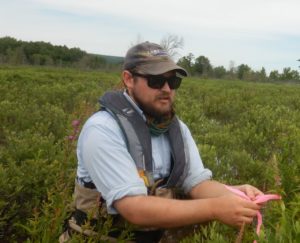 They have found a notable plant in the St. Louis River estuary. “It’s incredible to think we have aquatic ferns floating around. They are no bigger than your fingertip. They’re really common in the estuary,” Beaster said.

Cattails are often the first thing people think about when visualizing an emergent marsh, but Beaster said cattails are often a sign of problems. “Often, they signify nutrient-loading. Cattails also out-compete native plants. There can be toxic chemicals present or heavy metals.” Allouez Bay in the estuary is an example of one such area.

Schwarting said control measures for invasive species like cattails include chemical, mechanical and biological measures. But care must be taken. “It’s not enough to control these species. As soon as you control something, you’re basically creating a disturbance,” he said. “Normally, a lot of invasive species come in through disturbances, so you’re opening them back up to having another species either come in or even the same species being reintroduced from your disturbance. So, we want to do some restoration work on top of any control.” Some plants used in this way are wild rice and seedlings of other native species already at the location.

Schwarting said that wetlands along Lake Superior are doing well. “While there are some negatively impacted sites on Lake Superior, we probably have some of the more diverse and higher-quality wetlands in the Great Lakes region. Especially compared to the more industrial sites,” he said.

Beaster said one of the top five coastal wetlands they’ve been to is on Madeline Island. Bog Lake is a barrier wetland and fen on northern part of island. “Once we’ve boated out there, we have about three hours to do our surveys, but we’d rather spend three days because it’s so cool. This wetland is iconic of what an oligotrophic plant community should be on Lake Superior. We don’t see any invasive species here. It’s pretty stable – easy walking on the ground. Year after year we don’t really see any changes.”

She said Bog Lake isn’t the only high-quality, undisturbed wetland in the area. “This fortunately is here, intact, and it’s very encouraging especially when what we see in the St. Louis Estuary doesn’t always seem like it’s very high quality any longer. However, the estuary contains about 25 different oligotrophic species. Some of them are very common: wire sedge, bog birch and bog buckbean. When we’re out in these habitats and we know we have these remnants of oligotrophic species, it always brings to mind what the estuary used to look like, which is incredibly different from what we see now. But it is encouraging that we still have those oligotrophic species there, and we have done a lot over the years to stop our nutrient loading and to clean up some of the areas of concern. We’ve been controlling invasive species and I believe we’ll continue to control them even further once these areas are cleaned up. Eventually, we will have some semblance of these oligotrophic plant communities back, and they’ll be fairly functional, I hope.”

A video of their talk is available on YouTube here. The next River Talk will be held March 3 in conjunction with the St. Louis River Summit. The topic is “A River of Poems.” Poets from across the country will share their works about rivers.