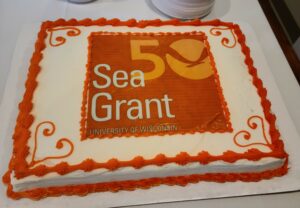 The final River Talk for the 2021-22 season was held in May at the Lake Superior Estuarium and online. Jim Hurley, director of Wisconsin Sea Grant, presented, “Sea Grant at 50: Looking Back, Moving Forward,” examining the formation of this science-based organization devoted to sustainable use and protection of Great Lakes resources. He also discussed Sea Grant’s current work and where it is headed as it looks forward to the next 50 years. 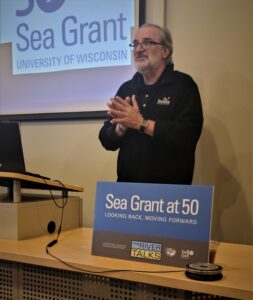 Hurley is also a professor in the Department of Civil and Environmental Engineering at the University of Wisconsin-Madison. His research interests include the cycling of mercury in the Great Lakes. He is the third director in Wisconsin Sea Grant’s history, having taken the helm in 2012. From 2017 to 2019, he also served as president of the national Sea Grant Association.

Hurley began by saying, “I’m darn proud to be able to give this talk and to be a part of an organization that I have so much respect for and that’s surrounded by so many great people.” He continued by describing the federal legislative history of Sea Grant’s founding and then went on to describe the accomplishments of the other Wisconsin Sea Grant directors before him.

He noted Robert Ragotzkie (director from 1968-1991) for thinking thematically about the areas that Wisconsin Sea Grant concentrates on for its research and outreach programs. “Also, Bob talked about Lake Superior’s circulation. He was thinking about Lake Superior in oceanographic terms and how that affected pollution distribution,” Hurley said. Ragotzkie also conducted climate research at this early stage.

Ragotzkie gathered the program’s first cadre of extension agents and formed partnerships with other organizations. Hurley credited this start as the basis for the more than 240 partner organizations that Sea Grant works with today. Ragotzkie’s strength was putting together teams of partners to study issues such as PCB pollution in the Fox River near Green Bay. He also established the program’s first communications team, which led to the formation of the popular Earthwatch Radio program, which was used by stations across the county.

Anders Andren (director from 1991-2012) took Ragotskie’s thematic area idea and brought it to Sea Grant at the national level through his work with the Sea Grant Association, which is made up of directors from all of the Sea Grant programs across the country. Hurley said Andren did that to “get people in New Jersey Sea Grant that were doing the same thing as Florida Sea Grant or Oregon Sea Grant together to talk about similar types of issues, and then try to aggregate the results.”

Under Andren’s technological leadership, Wisconsin Sea Grant developed a website and an online submission system for research proposal submissions and reviews. Also during his tenure, the university’s Water Resources Institute’s management combined with Sea Grant under one umbrella organization known as the Aquatic Sciences Center.

“Another thing that occurred during Anders’ term is that the Great Lakes came together better, I think, than any other network in the county,” Hurley said. This has led to cooperative regional research and outreach projects. “It gives you such a great network, such a community of practice that can interact.”

Hurley has continued the thematic area tradition. He’s also been emphasizing actionable science, which he classifies as research projects “that people can use.” He is also encouraging integration of science communications and social science into research. “The most successful projects are those developed with stakeholders at the table,” Hurley said. “We’re starting to see more of those.”

Since 2016, Wisconsin Sea Grant has also enlarged the number of postgraduate fellowships offered, with the help of Associate Director Jennifer Hauxwell and half a dozen partner organizations. Hurley rounded out the subject of accomplishments under his watch by discussing PFAS (per- and polyfluoroalkyl substances) research. He said the impetus began in Superior, Wisconsin, with the Husky Refinery fire, which was doused with firefighting foam that contains PFAS. Staff at the National Lake Superior Estuarine Research Reserve requested help from Sea Grant to analyze water samples from a local creek.

“There was only one lab in the state that was certified to analyze the water for PFAS. We knew that had to change. We had some extra funding available. We were able to aid the State Laboratory of Hygiene, which is the state’s environmental research lab and its public health lab, to build capacity to analyze for PFAS in water,” Hurley said. Now, the State Laboratory of Hygiene has opened a Center for PFAS Research. Sea Grant has also hired an emerging contaminants specialist (Gavin Dehnert) who focuses on PFAS and was active in proposing PFAS drinking water standards for the state.

Wisconsin Sea Grant continues to have a strong communications program that has moved from the era of radio into podcasting, video and blogging. “Communications has also changed with the times and I really feel it’s ahead of the curve,” Hurley said.

Other issues of focus include climate change, Great Lakes water level changes and encouraging diversity, equity, inclusion and environmental justice in programs. Sea Grant has hired a consultant and is in the process of becoming more inclusive as an organization. One of the first areas to benefit has been Sea Grant’s fellows program and undergraduate internships.

For someone like me, who grew up in a lot of turmoil and violence, being near the water was free and it was fun. I’m thankful to the educators who took us out of the classroom on onto the beach. There are a lot of people who make sure our water is clean, free and accessible. I just want you to know that it really matters. I want to thank Sea Grant and wish you a happy birthday. We’ve been close partners for a long time.

Something that’s really been remarkable to me from the very beginning of the Reserve’s formation . . . is how we were different yet complementary. That’s what makes a good relationship. The Reserve focuses on the St. Louis River Estuary and along Lake Superior, but Sea Grant gets to have this awesome statewide perspective. So, the Sea Grant folks that share our office space and share our community, bring that to us and help make us part of that, too. They also bring expertise that the National Estuarine Research Reserves don’t really have.

Again and again, Sea Grant has set the gold standard on how to protect our coastal natural resources and our coastal communities. I’m really excited to see what you’re going to do in the next 50 years.

Watch the video of this talk on the Reserve’s YouTube site.

River Talks is taking a hiatus during the summer but will return in the fall for another season of talks focused on the St. Louis River and the organizations that help us understand it.