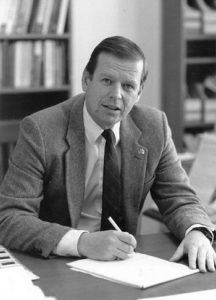 We’re continuing to gather background information in preparation for Wisconsin Sea Grant’s 50th anniversary celebration, which will happen in a few years. After speaking with Wisconsin Sea Grant’s first director Robert Ragotzkie, I caught up with our second director, Anders Andren, as he “slaved away” on tasks as secretary of his condo association in Florida.

Anders, 74, graciously interrupted his duties to speak with me for a half hour about what he’s been doing since he retired in 2012. He also shared memories about his time with our program, and offered insights into how Sea Grant came to Wisconsin.

A co-sponsor of the bill from Florida (Paul Rogers) agreed to add the Great Lakes to the legislation, and the bill passed.

Anders also said that when Sea Grant was first formed, its funding came from the National Science Foundation for a year or two, not the National Oceanic and Atmospheric Administration like it does now.

Anders has been busy helping Sea Grant on a national basis with site reviews (the process by which Sea Grant programs are evaluated every four or five years). He just came back from North Carolina Sea Grant’s review process. Plus he is on the National Sea Grant Science Advisory Board, which evaluates the evaluation process and makes recommendations for tweaking it.

He’s also been working in southeast Africa and Georgia with his son. The African project is at a resort in Mozambique, which features 20 miles of beach and an estuary that was in need of rehabilitation. Anders helped construct an artificial reef in the estuary.

The Georgia project is an aquaculture operation that involves raising largemouth bass for sport fishing and for sale.

Anders hasn’t formed his own band yet (a goal mentioned in his retirement story from 2011), but he does play guitar with a pianist during weekends at a local restaurant. “It’s not really a band and I don’t do it every weekend, but most weekends,” he said. “I also play piano for our condo’s parties and Christmas parties. We have singalongs.” 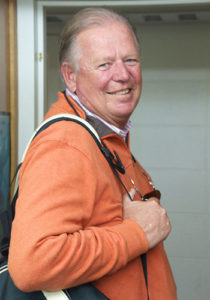 He and his wife plan to celebrate their 50th wedding anniversary soon in England.

Despite his far-flung travels, Anders says Madison is still one of his favorite cities because of all his friends there. He’s also an emeritus professor and visits campus periodically.

All in all, Anders is a great example that life is possible after Sea Grant. It seems as if he’s living that life to the fullest.