By Martyann Birman, University of Wisconsin-Superior

The River Talk series continued this past Wednesday, Feb. 13, at the Lake Superior Estuarium. This month’s talk took on a serious note, as community members gathered to gain insight into the very structured world of emergency management.

Dean Johnston of the U.S. Coast Guard, John Sager from the Wisconsin Department of Natural Resources (DNR), Dave Sletten from Douglas County and Kevin Mustonen from the Minnesota Pollution Control Agency (MPCA) were the evening’s panelists.

To kick off the discussion, audience members were asked what they thought constituted an emergency. Answers ranged from natural disasters, such as floods, to power outages and gas leaks. With the Husky Refinery explosion of last April in Superior still fresh on everyone’s mind, chemical emergencies were also a topic of discussion.

When these events happen, the panelists and the agencies they represent are fully prepared to deal with the situation. “Even though there are all kinds of levels of government and agencies involved, almost everybody has some sort of plan in place. I think the general public would be fairly impressed with the amount of planning that goes on,” Mustonen said.

In the world of first response and environmental protection, events can escalate from relatively calm to a full-blown emergency in a matter of minutes. Alternatively, they may start out seemingly intense and become easily controlled, or even fluctuate between the two several times.

Sager of the DNR put it this way, “When a spill is reported, it comes into our call center in Madison and will get passed on to one of the spill coordinators. I am a spill coordinator for the northern region, so the call will come to me. For the most part, I always say it’s the ‘oh my God’ test, right? You pick up the phone, and they tell you what’s going on, and you say, ‘oh my God,’ okay… that’s an emergency. Of course, much more goes into evaluation and emergency than that, but it’s a start.”

“The state of Wisconsin holds contracts with spill response companies. While they are more than willing to take action to aid in clean up, they will be seeking cost recovery from the responsible party,” Sager said. In the case that a spill is beyond state resources or capabilities, the U.S. Environmental Protection Agency will be contacted.

Another issue of concern, certainly as we approach the spring melting season, is flooding. “Douglas County Emergency Management has spent a lot of time on flooding over the last 10 years. We’ve had three presidential disasters involving FEMA,” Sletten said. 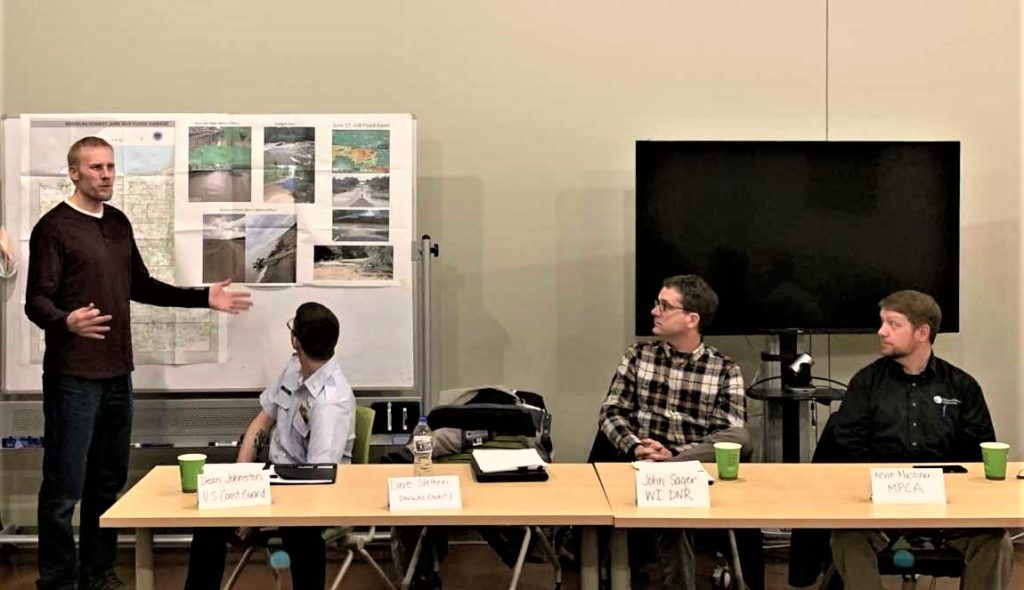 Dave Sletten of Douglas County describes the over five million dollars in damages from flooding across the region in the last ten years.

When these floods occur, it’s all hands on deck. “Knowing the players is key,” Sletten said.

The various agencies have participated in many conferences and training exercises with one another to prepare for such events. “You never realize how valuable the training is until there is an event. To be able to go into a situation, and know who is there with you is crucial. If you have to go into a large event where there is a lot of stress, and get to know the group, it just doesn’t work,” said Sager.

Aside from the safety of community members, debris management and proper waste control are a top priority. Both the DNR and the MPCA work together to ensure dangerous substances and debris aren’t flowing into waterways. Additionally, they assist members of the community who are struggling with flooded basements and rotted materials, to aid in proper clean up.

“Life saving is always first, followed by property preservation and then environmental preservation. Depending on the size of the incident, the training of the first responders, and what resources they brought with them, all three issues may be addressed simultaneously,” said Mustonen.

In these events, community members often feel a call to help one another. While it is welcomed and appreciated immensely, the U.S. Coast Guard wants to ensure that it is done in the safest and most effective way possible.

“Yes, we want the support, we want the help, but we want to plug individuals into the proper place and in the most appropriate, effective place,” Dean said. If community members want to help in an emergency, he urges them to come and check in with a first responder.

Unfortunately, the frequency of catastrophic weather events is growing exponentially with the warming planet. These natural disasters will continue to test the strength of our agencies, communities and infrastructure. While we may not be able to tame Mother Nature, we can take steps to ensure we keep ourselves temporarily sustained in the case of an emergency.

“Being prepared yourself is the key to any community plan in my belief,” Dave said. He suggests maintaining supplies to sustain yourself and your family for at least three days. To find information on emergency kits and more, visit: readywisconsin.gov.

River Talks is an informal monthly series about the St. Louis River Estuary held at the Lake Superior Estuarium on Barker’s Island in Superior, Wisconsin, hosted by the Lake Superior National Estuarine Research Reserve and the Minnesota and Wisconsin Sea Grant programs.

The next talk will take place at 6:30 p.m. on March 5 at the University of Wisconsin-Superior (UWS) in the Great Hall of the Yellowjacket Union. Keith Okeson, past-president of the Lake Superior Chapter of Muskies, Inc., and Marte Kitson, extension educator with Minnesota Sea Grant, will present, “Muskie Fishing a Restored River.” This talk is being held as part of the St. Louis River Summit, which is happening March 5-6 at UWS.