Both tie in with the broader goals of Wisconsin Sea Grant and the National Sea Grant Office in terms of supporting a sustainable, domestic supply of fish and seafood and closing the trade gap in this sector of the economy. 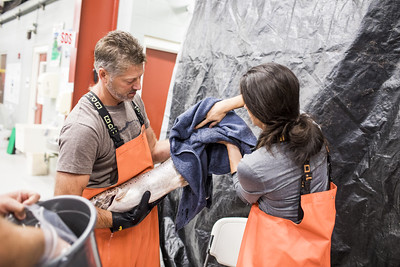 The Atlantic salmon paper appears in the June/July issue of Aquaculture Magazine (Vol. 46, No. 3). Its authors are Greg Fischer, Emma Wiermaa, Chris Good, John Davidson and Steve Summerfelt. Fischer and Wiermaa are based at the University of Wisconsin-Stevens Point Northern Aquaculture Demonstration Facility (NADF). Located in Bayfield, NADF is a frequent partner with Wisconsin Sea Grant and Wiermaa’s position as an aquaculture outreach specialist and research associate is co-supported by Sea Grant.

The Aquaculture Magazine article looks at some of the issues affecting the growing of the land-based salmon industry in the U.S., such as saprolegniasis (commonly called “fungus”), which can affect both farm-raised and wild fish. (For more information, see our previous story here.)

The piece also looks at methods for preventing “off flavor” in the fish. Often described as a musty or earthy taste, it can be off-putting for consumers.

Fischer, Wiermaa and their collaborators are also participants in a broader initiative funded by the National Sea Grant Office called RAS-N, for Recirculating Aquaculture Salmon Network. A large-scale effort between three Sea Grant programs—Wisconsin, Maryland and Maine—and numerous private and nonprofit research entities, RAS-N aims to support the growth of sustainable, land-based salmon production in the United States. That collaboration kicked off with a December 2019 meeting in northern Wisconsin.

The second paper hot off the digital press, so to speak, springs from social science research conducted by Bret Shaw, Kristin Runge, Laura Witzling, Shiyu Yang, Chris Hartleb and Deidre Peroff. On June 16, it was published online in the journal Environmental Communication.

The paper focuses on insights gleaned from a survey of 3,000 randomly selected Wisconsin households. While consumer views on aquaculture have been widely studied in Europe, the topic has received less attention in the U.S. The team looked at emotions and opinions about Wisconsin aquaculture—which, they found, were generally favorable among those surveyed.

The team also looked at predictors of support for environmental policy in nuanced situations: individuals may want policy to help an industry grow, to regulate it, or both at the same time.

The paper, “Predictors of Environmental Policy Support: The Case of Inland Aquaculture in Wisconsin,” may be found online.