The final River Talk of the season, “Deterring Geese on the St. Louis River to Protect Wild Rice,” was presented by Sam Hansen, a former summer undergraduate research fellow with the Lake Superior National Estuarine Research Reserve, on May 13. The presentation was done virtually via Zoom, which allowed people to come together during the Coronavirus pandemic. It is available on YouTube.

Hansen completed his research in the summer of 2019. In his talk, he discussed the effects of low-impact kayaking on the Canada geese population in bay areas and the relationship between these geese and wild rice.

Wild rice is an important resource in our area, not only economically, but socially and culturally as well. Hansen began his talk by discussing the current situation of declining rice in the St. Louis River and what could be causing levels to drop. “There are a couple reasons for the depletion of wild rice in recent years. One is rising water levels, sulfide levels and the focus of this study, goose predation.” 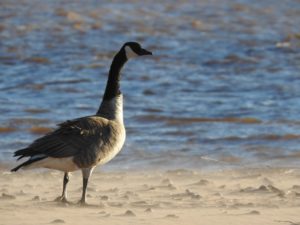 Canada geese were once endangered in our area, however since then, geese have replenished their population, reaching around 5 million breeding geese in 2013. Hansen says the increase in the population is likely due to the increase in agricultural grain, meaning the geese have more feeding opportunities. This includes wild rice in their diet.  This increase in goose population means a decrease in wild rice.

To test whether human activity, such as low-impact kayaking, would have an effect on goose visitation in areas with wild rice, Hansen set up eight trail cameras: four on visited lakes (lakes with frequent human visitors), and four on unvisited lakes (lakes with no visitors). The trail cams took photos every ten minutes, totaling around 30,000 pictures that he had to sort through at the end of the observation period.

Hansen acquired kayakers for the visited lakes through volunteerism, Craigslist, and geocache opportunities. Geocaches are small, hidden containers that usually include a notepad and pencil or a small item inside with which people are then able to leave a small note or exchange an item of their own bringing with an item inside the container. This is something that is a unique addition to the study to attract more people that may normally not have visited the lakes otherwise. People that were not volunteers for the study, but were still present on the lake, were also taken into account.

Hansen said, “The geocaches were meant so that people would have to kayak out to find them and, therefore, deter geese. Some people, however, did just grab them from land, but fortunately, we were able to still count them as visitors.”

For his research, Hansen recorded what time of the day geese were most likely to be active and what stage of growth the wild rice was in when most geese were present. Hansen said, “There is a higher abundance of geese during the flowering leaf stages of wild rice and the bays are most frequently visited during dawn and dusk, while midday times were avoided. Kayaking or visiting the bays during morning and night will most effectively deter geese.”

Hansen’s overall results showed non-motorized water recreation could be a goose deterrence method and would be most effective in areas with more wild rice in the flowering stages.

One audience member noted that goslings are grown by the time the rice flowers, and speculated that more geese are present during the flowering stage because the young geese increase the population counts.

Another audience member asked if bringing a dog while paddling could also help deter geese. While Hansen said no further studies on goose deterrence are being conducted right now, both of these ideas could be a potential study in the future.