Meeting attendees from across the country got a true taste of a northern Wisconsin winter at the inaugural meeting for a Sea Grant-funded effort to support the sustainable development of the land-based Atlantic salmon industry in the U.S.

As the gathering kicked off in Washburn in December, the mercury read a nippy 6 degrees Fahrenheit, with subzero wind chills. Yet energy levels inside the Harbor View Event Center were high as approximately 50 attendees began laying the groundwork for a robust collaboration that was dubbed RAS-N, for “Recirculating Aquaculture Salmon Network.”

The effort is being funded as part of a larger package of $16 million in federal aquaculture grants announced in September 2019 by the National Sea Grant Office.

Participants at the meeting included Sea Grant staff from Maryland, Maine and Wisconsin, as well as the National Sea Grant Office; National Oceanic and Atmospheric Administration (NOAA), U.S. Department of Agriculture (USDA) and U.S. Fish and Wildlife Service staff; and representatives from private industry, including feed and salmon producers.

Maryland Sea Grant is leading the three-year project to identify and address challenges faced by the land-based Atlantic salmon (Salmo salar) industry. The Wisconsin and Maine Sea Grant programs are partners in the multistate consortium. The project builds upon earlier Sea Grant investment in this area, including research based in Wisconsin.

The December event spanned two full days of presentations and discussion. It also featured a tour of the University of Wisconsin-Stevens Point Northern Aquaculture Demonstration Facility (NADF) in nearby Bayfield. Attendees observed various NADF research projects with Atlantic salmon and other fish species.

Said Fischer, “I was very impressed by the commitment of the group, who showed up in the middle of a good old-fashioned Wisconsin snowstorm. Even with record-setting low temperatures, many expressed how glad they were that they came, some from as far as Europe.”

Growing the economy—and the workforce

As one of the conference speakers noted — Brian Peterson of the USDA’s National Cold Water Marine Aquaculture Center in Maine — seafood represents the United States’ largest trade deficit of any agricultural product. And, as David O’Brien, acting director of the NOAA Fisheries Office of Aquaculture, told the group, “Wild fisheries alone cannot meet the increasing demand for seafood.”

This sets the stage for sustainable U.S. aquaculture to help meet the world’s demand for seafood while growing a sector of the U.S. economy. 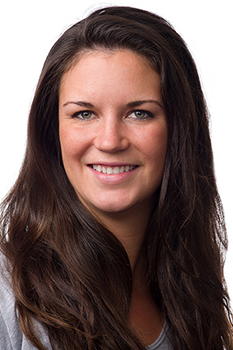 As Wiermaa observed, “Land-based, water reuse systems for growing Atlantic salmon allow the fish to be raised close to market, with limited impacts on the surrounding environment. The result is fresh, local filets for consumers.”

Wisconsin-based Superior Fresh is already having success in this arena as the country’s first land-based Atlantic salmon producer and world’s largest aquaponic farm. Said Chief Science Officer Steve Summerfelt, 99.9% of the facility’s water flow is recycled, and there is zero discharge to surface water. Superior Fresh currently employs more than 70 staff and is expanding.

Representatives from Riverence, Whole Oceans and American Salmon — other private entities currently in this space or preparing to launch facilities — also presented.

Several speakers addressed the educational and workforce development aspects of the industry.

Scarlett Tudor of the University of Maine’s Aquaculture Research Institute described her campus’ approach to fostering the future aquaculture workforce. By placing paid interns in companies, the university helps students build their resumes while conducting research for industry that may not otherwise be possible. The university is also interested in reaching noncredit students. As Tudor noted, hands-on experience is key in the aquaculture world, and not everyone needs a degree for their particular career path.

Wiermaa noted that NADF hosts one or two student technicians at a time, and more than 90% of those techs find aquaculture positions after their stint in Bayfield is over. UW-Stevens Point is a leader in aquaculture education. It is the first accredited university in Wisconsin to offer an aquaculture minor (which is still uncommon in U.S. colleges) and the first in the country to offer full-semester aquaponics courses, a master class and professional certificate program. 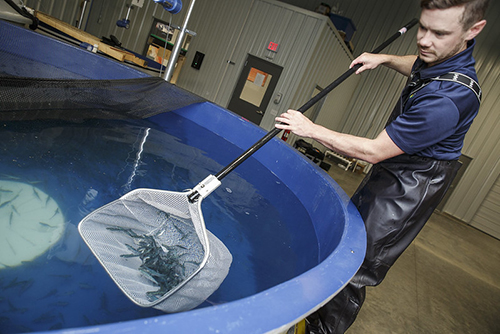 Fish health, biosecurity, consumer perceptions and other topics were also addressed during the wide-ranging meeting. The aim of this gathering was to bring together a small, focused group of stakeholders to get the project off the ground.

Said Summerfelt, “I’m excited that Sea Grant has supported RAS-N, which has brought together land-based salmon stakeholders–producers, suppliers, trainers of the workforce, and academics—for the first time. With this kickoff meeting in Washburn, we have begun preparing a roadmap to address our needs and gaps in knowledge to reduce risk and increase production efficiencies, as well as consumer awareness. RAS-N is providing a terrific venue for collaboration.”

Future steps in 2020 will be a RAS-N session at the Aquaculture America conference in Honolulu in February, and a fall gathering at the Institute of Marine and Environmental Technology in Baltimore. Organizers expect to invite a larger group of stakeholders to the Maryland meeting as the collaboration continues to take shape.