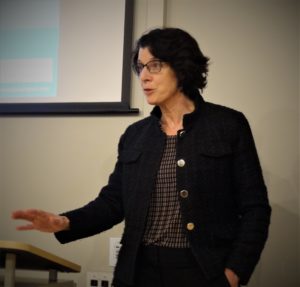 The Duluth Seaway Port Authority’s mission is to bring business to the port of Duluth-Superior, economic development to the region and to advocate for maritime and transportation industries. The port authority also owns one of 20 active terminals – the Clure Public Marine Terminal – which is the only general cargo terminal in the harbor.

DeLuca said one of the challenges about being located in Duluth is how far inland the port is. Ships must travel to the western tip of Lake Superior to reach it.

Some of the primary cargoes shipped from the harbor are iron ore, limestone and coal. Grain is the No. 1 export. However, DeLuca also talked about the increasing wind turbine imports to our area. The wind turbine imports the port is receiving are shipped all across the upper Midwest, including states as far as Montana, South Dakota and Nebraska. Wind turbine parts can be immense, with some blades over 200 feet long.

The talk of wind turbine imports added to what has always been a big part of DeLuca’s life, the environment and sustainability. In college, she earned her bachelor’s in molecular biology, and later a master’s in land resources at the University of Wisconsin-Madison. She talked about her internship with the U.S. Environmental Protection Agency, and her experience working with the Minnesota Pollution Control Agency and Braun Intertec, an environmental consulting and testing firm.

During her college career, she worked at a bike shop, adding to the list of DeLuca’s wide interests and capabilities. While there, she purchased a bike and learned from her coworkers how to ride competitively. She quickly progressed and eventually made the U.S. National Cycling Team.

She also worked for the Minnesota Department of Agriculture. Later, she started her own company, DeLuca Strategies LLC, where she provided services such as funding strategies, grant-writing, project management, public outreach, and government relations to public, private and nonprofit clients.

The River Talks audience was engaged and asked an abundance of questions. One audience member asked whether the port authority has looked into tourism and possible recreational benefits for people who may want to see the ships up close at the port. DeLuca said, “Kayaking and paddleboarding down by the port may be a fun idea, but it is also dangerous because the ships cannot see people down below, and they can’t maneuver quickly or stop.”

DeLuca was also asked questions about the environment and people who may be studying the topic. She offered this advice: “You can have all the passion in the world to make a difference, but without an understanding of economics and finance, it will be difficult to implement change.” She recommended gaining knowledge of finance and economics in addition to environmental sciences.

The next River Talk will be held on Feb. 12 at 7 p.m. at the Lake Superior Estuarium. Nancy Schuldt will be discussing the growth of wild rice in the estuary.