I recently had the good fortune to go on my first extended sailboat trip across Lake Superior with some friends. We left Duluth, Minnesota, and headed to Wisconsin’s Apostle Island National Lakeshore, and then traversed the western arm of the lake to Grand Marais Harbor in Minnesota.

Since I am writing this, you know I survived the three-day trip. If fact, I would like to think I thrived, despite turning green with seasickness once and having to wear all my winter gear, plus hand warmers, on the 4th of July.

I learned a lot about sailing, but still have more to know. I was also able to take plenty of pictures, which no doubt, will find their way into Sea Grant publications in the future. And I got a firsthand look at conditions on the lake.

Two things struck me and my sailing companions. The first was the color of the water. Almost all the way to the Apostles it was the hue of chocolate milk. The large extent and persistence of the coloring was unusual. There were also floating logs to watch out for.

According to a news story I read upon returning home, the condition is due to a series of recent heavy rains that have sent thousands of tons of silt into the lake. Chequamegon Bay, on the other side of the Apostles, is also experiencing heavy sedimentation.

Usually, the chocolate milk dissipates within a few days, but this round of it is lasting longer than usual because we kept having downpours every few days. Most of the sediment comes from the Nemadji River and its red clay banks, along with the St. Louis River.

We also had more than double the amount of usual rainfall for the month of June. Anglers and charter captains are having to travel farther than usual out into the lake to find clear water for fishing.

The second notable thing were the flies. Known locally by the name of “ankle-biters” or sand flies, stable flies look like a common housefly but they are meaner because they bite – usually a person’s ankles. I can attest that there are roughly a gazillion of them out on the lake and its shores this summer. The only thing that saved us from certain insanity on a shore trip to Outer Island was the fact that we were wearing jeans, which they couldn’t bite through.

The flies congregated in seething clusters from our knees down, rarely venturing farther up our legs. Thank goodness they had no interest in our bare arms or we would have had to run screaming back to our dinghy!

According to a story on National Public Radio, researchers have figured out how and why the flies and other biting insects like mosquitos do this. They think these biting bugs target feet and ankles because we are less likely to notice (and therefore kill) them. They hone in on their target by smell, and apparently, the sweat and skin on our ankles smells different from that of the rest of our body.

Besides wearing jeans, we found it helpful to elevate our feet off the ground while we were on the boat. They didn’t seem to be able to find our ankles if they were level with the rest of our legs. Conditions on the boat never got bad enough that we needed to apply repellant, but we were glad we had some along, just in case.

Although the water wasn’t its typical crystal-clear blue, and we had many insect stowaways aboard our sailboat, Lake Superior was still magical. I greatly enjoyed spending time on it, and hope to do so again someday. 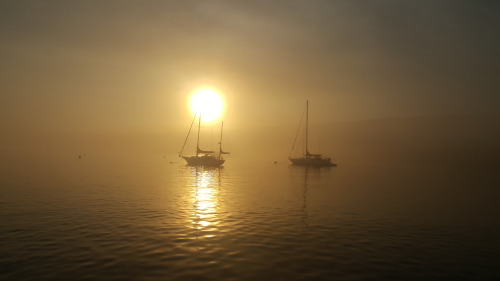