For the latest “dish” about Great Lakes fish, you’ll want to listen to “The Fish Dish.” The podcast, co-hosted by longtime coworkers and friends Sharon Moen and Marie Zhuikov, introduces you to the people behind Wisconsin’s fishing and aquaculture industries. Each episode includes a “Fish-o-licious” section where Moen and Zhuikov cook a new fish recipe. Tying it all together is ska music by Twin Ports band, Woodblind.

Subscribe for free through Google Play, Spotify and iTunes. 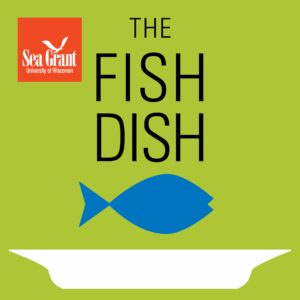 In this episode, we meet Daniel Grooms, business manager for the Red Cliff Fish Company in Red Cliff, Wisconsin. Red Cliff is at the top of Wisconsin’s Bayfield Peninsula and is the home of the Red Cliff Band of Lake Superior Chippewa. The company processes and sells fish caught from Lake Superior by tribal fishers. In fact, it’s entirely owned and operated by the Band. In the second, “Fish-o-Licious” part of the show, Sharon and Marie cook a frozen whitefish fillet in the microwave. Plus, they cover topics like fish dessert, author Stephen King’s attempt at microwaving salmon, and share the secret to evenly cooking a fillet of various thicknesses.

In the second, “Fish-o-Licious” part of the show, Ryan helps us make sushi for the first time with Lake Superior fish. We even try to have a competition for the best sushi, with the emphasis on TRY. Who will win this friendly sushi competition?

Sharon and Marie discover there are different camps that can get a little feisty when it comes to cooking this traditional holiday fish. Wisconsinites of Swedish and Norwegian descent feel strongly about their favorite preparation methods for lutefisk. We were invited into the home of Mary Childs in Port Wing, Wisconsin, to talk about cooking options, along with Mary’s friend Marge Ogren. We also discuss other holiday fish dishes.

In the second, “Fish-o-Licious” part of the show, we actually eat a lutefisk lunch with Mary and Marge.

Eat Wisconsin Fish Outreach Specialist Sharon Moen spent part of her summer visiting aquaponics and aquaculture facilities in Wisconsin. One of them was Lake Orchard Farm in Sheboygan, run by Nate Calkins. He shares his beginnings in the business, fascinating statistics about his operation, plus his dreams for the future. In the “Fish-o-licious” part of the show, we cook colorful Pan-Seared Tilapia with Mango Salsa. Also, Sharon and Marie share their experiences trying to raise fish and attending fish boils (in more ways than one).

Eat Wisconsin Fish Outreach Specialist Sharon Moen spent part of her summer visiting commercial fishers and fisheries managers in the Bayfield, Wisconsin, area. One of them was Craig Hoopman of Craig Hoopman Fisheries. He shares his beginnings in the business, current challenges, plus his dreams for the future. In the “Fish-o-licious” second part of the show, we cook Greek-Style Lake Whitefish at Craig’s recommendation. Also, Sharon and Marie share their backgrounds in fishing and introduce listeners to what Eat Wisconsin Fish is all about. Tying it all together is ska music by Twin Ports band, Woodblind. 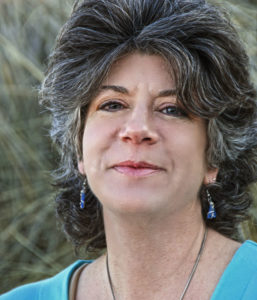 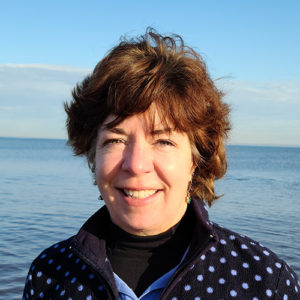 Sharon Moen provides information, trainings and opportunities so that people can make science-based decisions when producing, procuring, marketing or eating fish, especially in Wisconsin. She works with commercial fishers, food-fish producers and fish consumers so that Wisconsin can better support sustainable fisheries industries and improve human health. Prior to joining Wisconsin Sea Grant to focus on the Eat Wisconsin Fish initiative, Moen worked for Minnesota Sea Grant for over 20 years.