News > News Archive > Hard work, joy and more than a bit of luck add up to an accomplished coastal engineering career

As Sea Grant celebrates its 50th year, it’s catching up with former employees to capture memories and add to the year of commemoration.

Gene Clark knew from a young age that he would work as a chemist in a lab. He loved chemistry class, experiments and even failed experiments. He said, “I just loved testing things out. When they didn’t work, why didn’t they work?” 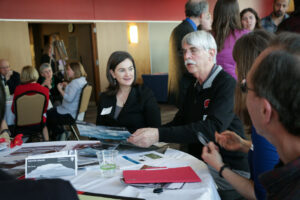 Gene Clark at an event in 2019. Photo: Bonnie Willison

Fortunately, his advisor was able to explain how a chemical engineering degree uses science-based processes and test results to solve real-world problems, and requires plenty of those chemistry classes Clark enjoyed. He realized, “No one had ever told me about what a career in the engineering field was or could do.”

Clark began at the University of Wisconsin-Madison’s chemical engineering program and stayed for two and a half years. In his junior year, he discovered a love for the oceans and scuba diving on a vacation with a fellow mechanical engineer. A Wisconsin native, Clark had never been diving before, and the experience left him awestruck.

Shortly after his return, Clark was studying in a student lounge and noticed a poster on the wall promoting ocean engineering at Texas A & M. He kept thinking about it, and after his next study session, took the poster with him.

Despite being only vaguely familiar with Texas A & M, Clark transferred. He said, “I assumed it was in Texas, I knew they had a good football team, and I hoped it was near the Gulf of Mexico—two out of three wasn’t bad.” The course of study was similar to a civil engineering program but was a bachelor’s degree in ocean engineering — particularly engineering principles related to oil rig structures — but he especially enjoyed a class about beaches. He was having fun and landing on the dean’s list, so upon graduation, he decided to continue with a master’s degree at the University of Florida.

He enjoyed the same level of academic success and fun at that program. “I made sure I stretched an 18-month master’s degree into a two-year master’s degree, so I could go scuba diving and go on the beaches.

During that time, Clark also made a valuable connection with a group from the U.S. Army Corps of Engineers office in Vicksburg, Mississippi, who were taking classes for one semester. He was offered a job there upon graduation and stayed for three years. By then, he had a young family and wanted to move back to Wisconsin. The only catch: He didn’t have any job leads in the state, or even any ideas about where to start.

“I didn’t know who was doing coastal engineering in the Great Lakes. I had no clue,” he said. 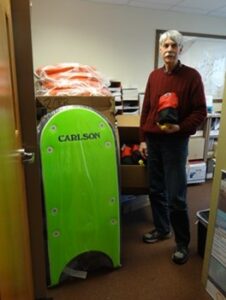 Clark made a visit to the coastal engineering professor at UW-Madison’s Civil and Environmental Engineering Department. He was impressed with Clark’s experience and degrees and offered him a year’s worth of funding on one of his current projects. (The project was funded by Sea Grant, but Clark wouldn’t realize that until later.) From there, he earned a second master’s degree and was offered a job at Warzyn Engineering. Warzyn transferred him to Minnesota to a division that did more dam work and less coastal work, so Clark went back to the job search. He landed a position as the Minnesota state lakeshore engineer located in Duluth, Minnesota, and stayed for 10 years.

He said, “That’s where I really learned my education and outreach because I was getting grants from the coastal program or the Great Lakes Commission to do demonstration projects on Lake Superior or work with individual property owners, but yet still working with a state agency.”

After 10 years in Minnesota, Clark was settled and enjoying his work. He was always skilled in working with teams and had formed close relationships with many colleagues, including Phil Keillor, who was the coastal engineer for Wisconsin Sea Grant. One day, he received a call from Keillor announcing that he was retiring and suggesting that Clark might want to apply for the position. Clark wasn’t sure he wanted to leave Minnesota to take Keillor’s position in Madison, but in a happy coincidence, another Sea Grant specialist announced his retirement at the same time. When Harvey Hoven retired from his position as the coastal business specialist in Superior, Wisconsin, Clark had the ability to take the new position without moving.

Clark went on to spend 15 years as Sea Grant’s coastal engineering specialist. It was an ideal position for someone who loves both science and working with people.

He said, “The way that Wisconsin Sea Grant is set up and operates is just so ideal for providing information and assistance to communities and property owners and other states’ programs. We could deliver a product that was honest, it was non-biased and it was science-based information.”

Whether he was working with partners from the UW-Madison Civil and Environmental Engineering Department to develop a system to protect kayakers from unexpected high waves, harbor operators to identify causes and solutions for freshwater steel corrosion, port authorities to find beneficial uses for dredged sediment or homeowners facing eroding shorelines, Clark always enjoyed collaborating with others. 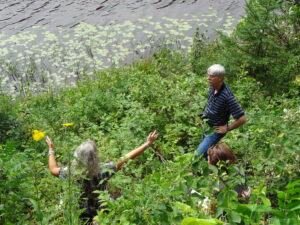 Interacting, hands-on, with stakeholders in the field, Gene Clark inspected an area by the St. Louis River following a flood in 2012. Photo: Marie Zhuikov

“And it didn’t take long, whenever I would meet with people or groups of people, for them to realize I’m not selling a product, I’m trying to help them. And I point out pros and cons, and then let them make the difference,” he said.

“It was all fulfilling. It wasn’t work. It was a blessing to be part of that,” he said.

The Covid pandemic limited Clark’s ability to meet with people, but he has been able to continue his work on two programs. One is based on a small grant from the U.S. Army Corps of Engineers to review two drafts of their National Shoreline Management Study, providing technical and practical report support. The second is a small grant from the Natural Resources Foundation of Wisconsin, providing technical assistance to the rehab project team. With partners at Sea Grant, Wisconsin Department of Natural Resources, Wisconsin Coastal Management Program and the UW-Madison Civil and Environmental Engineering Department, Clark has been working to improve beach quality on degraded beaches without disturbing natural coastal processes. The team started with the Kenosha Dunes and continued with other degraded beaches in southeast Wisconsin.

This project illustrates what Clark calls “a couple of very positive paradigm shifts,” which are the movement toward nature-based shoreline designs and the beneficial use of dredged material. When he started his career, shoreline protection consisted primarily of concrete, large rocks and sheetpile – now nearly all projects are focused on greener, more natural designs that provide habitat and allow for natural coastal processes. Reusing clean dredged material has also become more and more accepted, saving landfill space and providing valuable fill material.