In our continuing series of stories for Wisconsin Sea Grant’s upcoming 50th anniversary in 2022, I interviewed former extension agent, Harvey Hoven, who worked out of our office in Superior. Hoven was employed from 1989 through 2003 (14 years) focusing on coastal businesses along the South Shore of Lake Superior, aquaculture in the Midwest and initial efforts to remediate the St. Louis River, the largest U.S. tributary into Lake Superior. 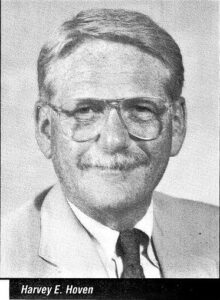 Hoven had already worked a full career in finance in Minneapolis before he found Sea Grant. He retired from banking and moved back to his hometown of Superior in the mid-1980s. Hoven boated and fished on Lake Superior frequently, enjoying his leisure. But his time boating also piqued his curiosity about the things living in the lake.

On the advice of some Wisconsin Department of Natural resources staff members, Hoven decided to pursue a degree in aquatic biology at the University of Wisconsin-Superior even though he already had an MBA from the University of Minnesota.

While he was studying, he heard that Wisconsin Sea Grant might be hiring locally. “I thought that would be a good thing to look into,” Hoven said. “It interested me, so I got involved. I kind of edged my way in there and got hired.”

Although his duties weren’t clearly defined at first, because of his finance background, they shaped up to focus on business enterprises along the Wisconsin shore of Lake Superior. Hoven said these included marinas, bait shops, charter captains and fishing groups. He worked to “get a feel of who’s doing what, what were some of the issues, what were the problems, what were the questions they wanted answers to. I played the role of go-between – somebody who was on the shoreline but had access to the university campus in Madison where the experts were – the fisheries experts, the engineering people. I was a gofer for UW-Madison on the lakeshore,” he said.

Initially, he spent much of his time getting to know people along the shore. This naturally led to projects. “I started doing an annual economic survey of business activity along the shoreline,” Hoven said. “I found that very interesting for two reasons. One, it gave me a sense of what was happening economically on Lake Superior. Secondly, it got me into everybody’s store!”

At first, business owners were reluctant to provide Hoven with their financial information, but as they got to know him they began to trust him. Hoven also credits help from former Barker’s Island Marina manager Jack Culley for their cooperation.

“He was a real dynamic guy and a hard-driven guy. He didn’t trust me at first, but after a while, we got to know each other quite well and he opened up his records to me. I think he maybe pushed the word up and down the shore that when I came around to talk about who’s doing what, they’d better sit down and talk to me so that their information would get into the survey and report, as well,” Hoven said.

He conducted the economic survey for about 10 years, comparing growth sectors and where new developments were happening.

Hoven also used to hold a daylong seminar for charter captains along with staff from Minnesota Sea Grant. Attendees talked about rules and regulations, who’s catching what kind of fish and what their records were showing in terms of fishing effort. Hoven used to also offer the captains business consulting advice.

After observing numerous crates of cisco (formerly called lake herring) on commercial fisherman’s docks seeming to go to waste as fertilizer or mink food, Hoven teamed with a professor at the University of Minnesota Duluth to conduct a market analysis to find a profitable use for the fish. They ended up getting a grant to conduct a marketing survey.

“As it turns out, we never did develop a great market for herring, but it’s an example of somebody like myself being in the position I was along the lakeshore, who kept my eyes and ears open and said, ‘Hey, there’s something we should work on.’”

Hoven also teamed with Sea Grant aquaculture specialist Fred Binkowski to develop business models for prospective aquaculture operations. “I was kind of in the middle again,” Hoven said. “I relied on Fred for the economic data for producing fish, but I also went the next step, which was telling them what they could expect when they market it and how to go about marketing it.”

Hoven presented his business model at several national aquaculture meetings. He also developed an aquaculture directory for the Midwest. For that, he visited every aquaculture facility, which took him a year.

His last project was perhaps Hoven’s most noteworthy. He chaired the group that developed the first Remedial Action Plan (RAP), which directed environmental restoration efforts for the St. Louis River after it had been designated as an Area of Concern by the U.S. Environmental Protection Agency. It also led to the founding of the St. Louis River Alliance, a nonprofit that works to protect the river.

Hoven said he chaired the board, a consortium of 25 people representing different businesses and organizations around the river, for five or six years. “That took a lot of my time, but it was very good because I got to be close to everybody in the community who was working on the river.

“At first, it was contentious because nothing was getting done. The businesses only could see dollar signs in the millions in front of them. We used to argue and yell at each other. Eventually, things got resolved and we published the first report, coordinating it with the National Oceanic and Atmospheric Administration’s RAP efforts across the country,” Hoven said.

That report provided an important blueprint for restoration efforts and has been updated over the years. “The river really was a mess, I’ll tell ya. But little by little, it’s getting cleaned up now,” Hoven said.