Blog > The Husky Energy Oil Refinery Fire – What’s Going on With the Environment? 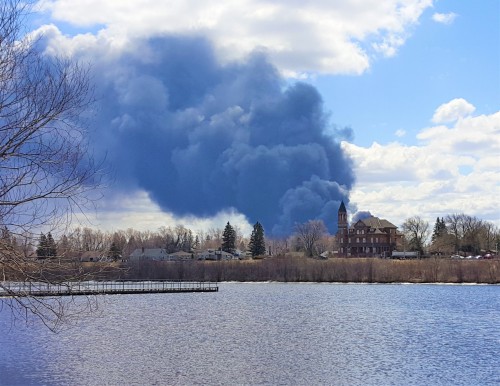 Gene Clark, Wisconsin Sea Grant’s coastal engineer, and I are back in our offices in Superior, Wisconsin, this week, following an evacuation last week due to an explosion and fire at the Husky Energy oil refinery.

The incident happened the morning of Thursday, April 26, with a loud bang that sounded like an electrical transformer blowing. The office lights dimmed briefly, then came back to full brightness.

“That can’t be good,” I mused to myself.

Not long after, a plume of black smoke snaked into the sky outside my window. It looked like it might have been a couple of blocks away. “I hope the fire department knows about that,” I thought, more concerned now.

As it turns out, the fire was two miles away. News reports started to trickle in that the local oil refinery owned by Husky Energy was the site of an explosion. Around lunchtime, the smoke started to thin and an emergency alert text from the University of Wisconsin-Superior reported that the fire was out. (Although it is located off-campus, our office is considered part of UW-S.) We all breathed a sigh of relief and headed out for lunch.

When we returned, however, the plume of smoke was back. Much larger and blacker this time, it looked more like an angry storm instead of snake. Not long afterward, the city started issuing evacuation orders. We decided to play it safe and leave to work at home.

According to a news conference I heard on television, for a quite a while, the fire crews could not fight the fire because the conditions were too dangerous. An oil refinery is one of the worst places to have a fire due to all the combustibles and chemicals contained in it. I expected the fire to go on for days because of this, but thankfully, it only lasted until the evening.

News reports said that the burning material was asphalt. The incident was likened to “an oil spill in the sky.” Although chemicals did pour out onto the ground, the major spread seemed to be airborne, and that’s why the evacuations were called, in addition to concerns about other, more harmful chemicals exploding, such as hydrogen fluoride.

Almost as soon as the explosion happened, scientists were monitoring the conditions of the air and water. The environmental assessment efforts are being led by the U.S. Environmental Protection Agency and the Wisconsin Department of Natural Resources in concert with other federal and state agencies and contractors. Husky Energy staff are also sampling and monitoring environmental conditions.

Our co-workers at the Lake Superior National Estuarine Research Reserve (with whom we share our office) are offering their support along with other science organizations in the Twin Ports. Good science takes time, however. While they are collecting data in real-time, the analysis is a deliberative process.

We (Wisconsin Sea Grant) are offering our staff expertise to our Reserve colleagues in helping with any issues arising from the fire. We offered rapid response/program development funds to address any possible contamination in the Lake Superior watershed. We are also providing the names of Wisconsin and out-of-state researchers and extension staff, if their expertise is needed.

Of course, Sea Grant has a long history of involvement with oil spills along the ocean coasts, and we have put the Reserve staff in touch with those resources.

The U.S. Coast Guard and contractors used booms to prevent contaminants from flowing out of Newton Creek, which runs near the refinery, and into the Hog Island inlet in the Superior Harbor.

Initial public reports from the EPA showed that air quality outside of the smoke plume was good. Inside the plume was a toxic mix of chemicals from the burning asphalt. According to news reports, it contained polycyclic aromatic hydrocarbons, which can be harmful when breathed, and can settle out on peoples’ yards and homes.

The Douglas County Department of Health and Human Services has afact sheet on the safest way to clean up your home if it’s been in the path of the smoke plume. Their web site also has good information in general about the incident and health concerns. County extension agents plan to hold some public listening sessions to help people who have questions about science, water, food, health and safety.

If people have specific questions about the refinery fire, the person to contact is Rachel Bassler. She is the Public Information Officer for the incident with the EPA: Bassler.rachel@epa.gov or (312) 886-7159.

Fortunately, nobody died in the incident or during the evacuation. Although the environmental impacts will take time to assess, rest assured that they are being worked on and will have the attention of agencies likely for years to come.