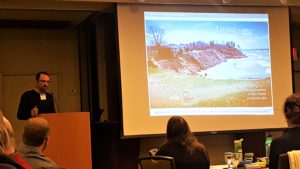 On Dec. 11, more than 90 people gathered in Duluth, Minnesota, for a conference on western Lake Superior water levels. They heard and provided the latest intel on what’s going on with the lake and what’s predicted for the near future.

Wisconsin Sea Grant Coastal Engineer Adam Bechle was one of the presenters, along with Michelle Shrider, general manager of the Washburn Marina and chair of the Wisconsin Marine Association, a nonprofit organization that focuses on issues facing the recreational boating industry in Wisconsin.

Melissa Kropfreiter with the U.S. Army Corps of Engineers provided an overview of water levels in Lake Superior and the other Great Lakes. The corps has tracked water level fluctuations for 100 years. She said natural processes such as rainfall and ice cover have a far greater impact on lake levels than do more direct manmade influences such as water flow controls.

“There is nothing man can do to control these lakes,” Kropfreiter said. “We can influence them by a matter of inches, but we can’t control them.”

The past five years (ending October 31, 2019) have been the wettest on record for the Great Lakes basin. Looking ahead, Kropfreiter said the outlook is for wetter than normal weather for the next three months. Water levels in Lake Superior are expected to remain high and new record highs could be set again in the coming year.

An audience member asked Kropfreiter if extremes in water levels are the new normal. She responded affirmatively, saying that her professional colleagues predict that higher highs and lower lows will occur more frequently.

Brandon Krumweide, the Great Lakes regional geospatial coordinator for the National Oceanic and Atmospheric Administration (NOAA) Office for Coastal Management in Duluth played with some water numbers. He noted that only about a meter separates Lake Superior’s record high and low water levels. The record low was recorded in 2007, and the record high was recorded in October this year (2019). Although a meter of water doesn’t sound like much, Krumweide calculated that the amount of water gained by the lake between 2007 and 2019 is enough to fill 62.4 million Olympic-size swimming pools!

He noted that wind is also increasing. Many of the worst recent gales have occurred during the month of October. These cause high waves and more erosion along the coast.

When asked if locals should change the stock “Gales of November” phrase to the “Gales of October,” Krumweide said he prefers the term “The Gales of Fall,” because many of the wind storms occur in that season.

During a panel presentation on local perspectives of water level impacts, Shrider said that ice and high-water levels in winter are causing dock damage in her marina and other marinas. She reminded the audience about the damage done to Saxon Harbor’s walls and breakwaters by recent storms. In Washburn, the top of the break wall broke off during a storm and needed to be repaired.

The recent windy and wet weather has heavily impacted tourism. “There’s a shrinking population of boaters who are willing to go out in less-favorable weather conditions as they age,” she said. “Our marinas are full, but the boats don’t leave their slips.” This also means that boaters are not inviting their friends to go out with them as much, which has led to declines in lodging income for her local communities. She said numbers were down 15-20% this year and 10% last year.

During his presentation, Bechle described several sources of information that Sea Grant offers to people who are dealing with water level issues. The first is “Living on the Coast,” a free 50-page booklet that describes the natural processes that cause erosion, how people can protect their coastal investments, and the economics of different protection actions.

Sea Grant also offers many fact sheets on related topics, which can be found online here.

The conference wrapped up with small group sessions where people moved around the room and identified critical resources that could help their communities address lake level impacts and improve resilience.