Blog > Super Milfoil: Coming to a Lake Near You?

Last weekend, while water skiing in Waukesha County, Wisconsin, I took a massive wipeout. I remember expecting to feel a painful sting after hitting the water, similar to that of a belly flop. Instead, I landed on a cushion of aquatic plants. I looked around and found myself floating on top of a giant mat of milfoil!

If you’re a Wisconsin lake user, patches of milfoil probably aren’t new to you. However, a new milfoil hybrid combines genes of native and invasive species and may be a cause for concern on some Wisconsin lakes.

Wisconsin has many native milfoil species that provide cover and sometimes food for fish, invertebrates and aquatic insects. Milfoil species such as northern or whorled watermilfoil are native to Wisconsin and have contributed to lake ecosystems for a long time. More recently, in the early 1960s an invasive milfoil species called Eurasian watermilfoil was discovered in Dane County and since has spread to over 800 lakes in Wisconsin.

Eurasian watermilfoil can spread quickly and efficiently, primarily because of its ability to produce adventitious roots after fragmenting. This means that if you cut a strand of Eurasian watermilfoil into 10 pieces, each piece could sprout new roots and become its own plant.

Treatment options for lakes that contain Eurasian watermilfoil differ by lake and vary by levels of efficacy, cost, benefits and drawbacks. Attempted treatments have included: chemical application, manual hand pulling and use of biological control weevils. 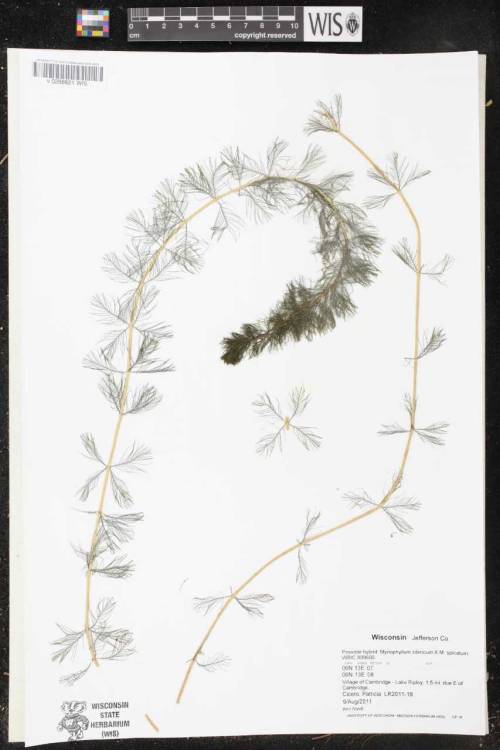 The hybrid species hasn’t caused any verified negative effects to lake ecosystems that differ from Eurasian watermilfoil, but its potential to cause trouble for lake users in coming years makes it worth keeping an eye on. For example, state biologists have observed that the hybrid may be harder to control using the chemical application methods we use to treat Eurasian watermilfoil. Specifically, in some cases, it has shown a reduced sensitivity to 2, 4-D and fluridone. (It’s important to note that if your lake hasn’t seen success treating for Eurasian watermilfoil it doesn’t necessarily mean you have the hybrid.)

Additionally, the hybrid’s growing habits seem to have a competitive advantage over both its parents. Expect more information on the hybrid’s behavior soon from organizations conducting research such as the University of Minnesota Aquatic Invasive Species Research Center and the Wisconsin Department of Natural Resources Aquatic Plant Management Program.

If yuu’re worried about hybrid milfoil making its way into a lake you care about, don’t panic! There are preventative measures individual lake users can take to make sure hybrid milfoil – and every other aquatic invasive species – doesn’t enter a new waterbody:

●      INSPECT your boat, trailer and equipment.

●      REMOVE any attached aquatic plants or animals (before launching, after loading and before transporting on a public highway)

●      DRAIN all water from boats, motors and all equipment

●      NEVER MOVE live fish or plants away from a waterbody.