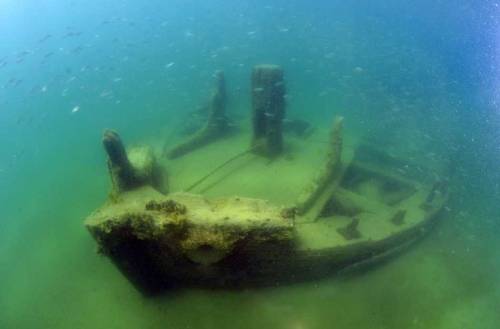 The La Salle has been preserved at the bottom of Lake Michigan since 1874. Image by Tamara Thomsen

As many might know, the Great Lakes house about a fifth of the freshwater supply for the entire world. A less commonly known fact is that the Great Lakes contain more than 6,000 shipwrecks. Among those shipwrecks live over 3,500 plant and animal species, which generally coexist with the shipwrecks in peace. However, the introduction and spread of aquatic invasive species pose a threat to existing ecosystems and the preservation of shipwrecks in the Great Lakes.

The Great Lakes were once (and still are) a massively important trading region because of their connection to inland rivers and lakes for transporting goods. The shipping industry took advantage of this connection, as well as the Great Lakes’ many natural ports. For various reasons, including gales, scuttling and fires, some of the same ships from this era remain at the bottom of the Great Lakes today.

Fortunately, the cold water and low salinity of the Great Lakes create an ideal environment for preserving these shipwrecks. Historians have an interest in uncovering new shipwrecks as a way to investigate old trade routes, discover cargo and study differences in ship design. Additionally, fish tend to make their homes near shipwrecks, so divers enjoy the opportunity to explore freshwater ecosystems.

Although new wrecks are discovered every year, maritime historians are concerned about preserving the ones we’ve already found. An example is The Alvin Clark, a ship that began to deteriorate as soon as it was removed from its cold and wet home in Lake Michigan. Apart from the natural preservation system the lakes provide, other conservation options include treatment with polyethylene glycol or designating a wreck as a National Historic Place. Unfortunately, options like these tend to be expensive and time-consuming.

Despite preservation efforts, shipwrecks face a new potential threat: aquatic invasive species. Today, over 180 invasive species, both plant and animal, threaten the ecosystems of the Great Lakes. The vessels most likely responsible for the introduction of these invaders are cargo ships that enter through the St. Lawrence Seaway. Large cargo ships uptake water at the beginning of their journey when the ship has little or no cargo to provide stability on the high seas. When the ships arrive at their destinations and it’s time to take on more cargo, they release the ballast water, along with aquatic animals and plants that may have hitched a ride. Some of these foreign species die immediately, but those that survive often thrive due to their abnormal growing seasons or lack of native predators.

Even though there are over 180 kinds of invasive species on the Great Lakes, we shouldn’t be discouraged. It’s important to still be conscious of the cleanliness of our watercraft. Not every part of every Great Lake has a zebra mussel presence, and shipwrecks could exist in an acre of water not yet infested. Aquatic invasive species can be accidentally transported in boat motors, livewells, and on fishing and diving gear. Individual lake users can help stop the spread of invasive species by following these Wisconsin Department of Natural Resources-recommended prevention steps:

DRAIN water from boats, motors, bilges and live wells before transporting away from a water or entering Wisconsin

NEVER MOVE live fish away from a waterbody

If every boater were conscious of their ability to spread invasive species and took actions to prevent the spread, existing populations could be contained. If populations were contained forever, shipwrecks in uninfested areas could be preserved and studied for decades to come.

For more information about shipwrecks in the Great Lakes, consult: http://www.wisconsinshipwrecks.org/