The fish division of the Spring Thaw Throwdown “Least Wanted AIS” Tournament is pretty stacked! We have some real heavy hitters in here. Some have been around a while, while others have become a problem relatively recently. With the charisma that some of these species possess, our money is on the winner coming out of this division. 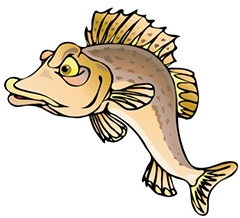 Up first, and the first half of the “small yet mighty” part of the fish divisional, is the Eurasian ruffe. This small, spiny fish was first discovered in the Duluth-Superior Harbor and quickly became one of the most abundant fish in the St. Louis Estuary. They’re efficient at eating macroinvertebrates and, in lab settings, outcompete native species in acquiring food.

While the ruffe has been detected in other Great Lakes, it is really only abundant in Lake Superior and, specifically, the Duluth-Superior Harbor. Bait bucket transfers could be a pathway for spreading the ruffe, as could transfer via ballast water of ships that exchange ballast in the Great Lakes.

But, let’s be real here – the Eurasian ruffe was a bubble species that barely made the tournament. They mostly made it on the strength of their illustration (pictured here) in the AIS attack packs that can be checked out through the Wisconsin Water Library. Let’s see how deep that drawing can get them into the tournament! 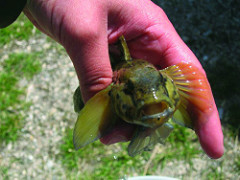 The other half of the “small yet mighty” part of the fish divisional is the round goby. What this Ponto-Caspian invader lacks in size, it makes up for in appetite and sheer numbers.  A diet generalist, round gobies will eat whatever is available to them on the benthos, or the lake bottom, where they live. However, gobies are quite fond of–and very efficient at–finding fish eggs. This includes the eggs of a lot of popular sportfish, like lake trout and smallmouth bass, and culturally significant species like lake sturgeon.

Round gobies are also very fecund. Unlike most native benthic species, which reproduce once per year, round gobies can reproduce multiple times per year in many situations. This allows their populations to increase quickly, and they have become one of the most abundant fish in the Great Lakes.

Prevention methods have been quite effective at stopping them from invading waters outside of the Great Lakes. Only a handful of round goby populations exist outside of the Great Lakes and their tributaries. Purchasing bait from a licensed bait dealer, then properly disposing of it when you’re through, is a primary prevention method. There are currently no control mechanisms that exist for the round goby. However, over time, predatory fish have learned how to eat round gobies. They have become a mainstay in the diet of many popular sport fish. This fact might keep them from earning the “least-wanted” crown.

Lastly, it has been noted in the published literature that round gobies have been observed spawning in a beer can. You have to at least give them that: they certainly know how to party Spring Thaw Throwdown style! 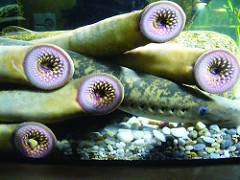 The sea lamprey are a blast from the past and a favorite to take home this year’s “least-wanted” title. One of the first invasive species to make its home in the Great Lakes after the creation of the Welland Canal, they have a little bit of everything that can make them a serious title contender. Gross teeth that allow them to liquefy and suck out the innards out of unfortunate fish? Check. Large economic impacts from all of the valuable sport fish they kill? Check. General unsavory disposition that maybe only the Queen would like in her pie? Check.

The one thing that might be holding the sea lamprey back from the title is that they’ve been around long enough that the opposition has figured out their game plan. That’s right, a cool $20 million each year kills enough lamprey larvae to limit their impacts and preserve our $8 billion Great Lakes recreational fishery. In fact, the sea lamprey is one of the best examples of a successful AIS control program.

The big question for the sea lamprey in this tournament is if their vampire-like qualities and other unlikeable characteristics can overpower how successful AIS managers have been at limiting their impacts. 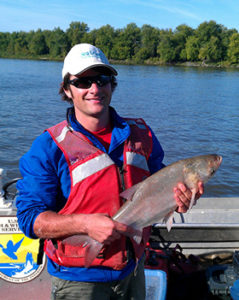 Your Spring Thaw Throwdown co-host, Tim Campbell, with a silver carp, right after getting whacked in the shoulder by the fish.

The silver and bighead carp are perhaps the flashiest of the species in the tournament. The silver carp’s acrobatics have made it a YouTube sensation, and both have been the subject of regional and national media stories.

Both species are filter feeders that outcompete native fish species for food at the bottom of the food chain, and both can get to be quite large, with silver carp exceeding 60 lbs. and bighead carp becoming larger than 100 lbs.

Silver and bighead carp often team up with the black and grass carp, but when all four species are combined into Asian carp, they are simply too powerful to compete as part of this least wanted tournament. The two filter feeders joining forces made the most sense for this competition.