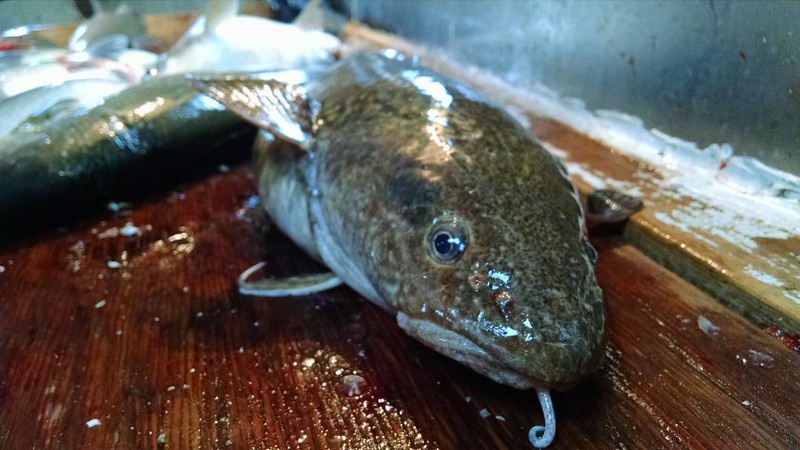 Shark Week, Aug. 9 -16, is a cherished annual tradition. In what I am hoping will also become a cherished tradition, Sea Grant presents a counter-Shark-Week look at a denizen of the sweetwater seas. A previous blog post regaled a number of Wisconsin fish. This 2020 edition offers five facts about the burbot.

The scientific name for this fish in the cod family is an onomatopoeia dream: Lota lota. It’s got other common names in addition to burbot, including lawyer, eelpout and lingcod.

The Grumpy Burbot (the alter ego of Sea Grant Fisheries Specialist Titus Seilheimer) has its own Twitter handle.

The fish is a bottom-dweller. Maybe this elusive home is why some of us Sea Grant staffers couldn’t eat them even though they were on the menu when we visited KK Fiske and The Granary in 2017. We had heard they were good eating but restaurant owner and commercial fisher on Door County’s Washington Island Ken Koyen hadn’t caught any that day. Burbot is not a target species and most that show up in whitefish and lake trout nets are discarded. Broiled and served with butter, however, the fish are said to taste like Poor Man’s Lobster.

Sea Grant funded a study about the birds and bees of burbot to better understand the entire Lake Michigan food web. Researcher John Janssen said, ““Burbot interact with many other fish. They like to eat a lot of sculpins, which are eaten by lake trout, and sculpins eat lake trout eggs. Knowing more about when and how burbot spawn adds more information to figure out the interactions between species.”

Much more burbot intel is available on the Eat Wisconsin Fish website. Details on the burbot study can be found here.