The sixth annual Water@UW-Madison spring symposium took place on Friday, April 22. Providing an opportunity for water scholars and policymakers to reconnect around water, it was an inspirational way to spend Earth Day.

More than 130 people joined the online community and it featured more than 15 speakers who reflected on water connections from the humanities, social sciences and policy worlds. You can catch a recording of the event. 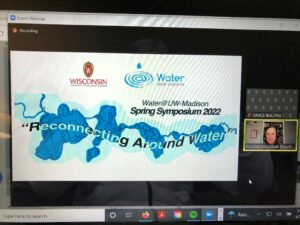 Caroline Gottschalk-Druschke chairs Water@UW-Madison and led an fascinating panel made up of water scholars.

I’m a member of the Water@UW-Madison executive committee but only played a small role in planning and running of the show. I did act as the morning’s Twitter jockey. The full rundown of live tweets can be found here if you want to keep the positive water vibes alive with a quick read.

There was a panel that explored fellowships that pair governmental agencies and newly minted water professionals to tackle water challenges. A second panel outlined a Water@UW-Madison program called FLOW that matches artists and researchers.

The scholarship of the third panel, made up of impressive water thinkers, could barely be scratched during the one-hour slot into which they fit. Here are links to their pages, which will allow for further exploration. In all but one case, there is also a tweet related to their comments:

Grace Bulltail, professor in the Nelson Institute @GraceBulltail water, energy and land can be markers of dispossession of Indigenous land and resources

Ingrid Diran, professor in the Department of English, Water is messy; it spills. You have to create barriers to think abt it and also think abt it as a connector

Tricia Gorby-Knoot, UW-Extension Natural Resources Institute director. @Gorby-Knoot Water is a natural entrance point to understanding the impact of the land and can tell us abt healing

Water@UW-Madison is an umbrella entity, organizing and amplifying the water expertise of 130 faculty and staff across more than 40 departments and programs. It represents topics such as water quality, invasive species and water policy. Anyone can join.