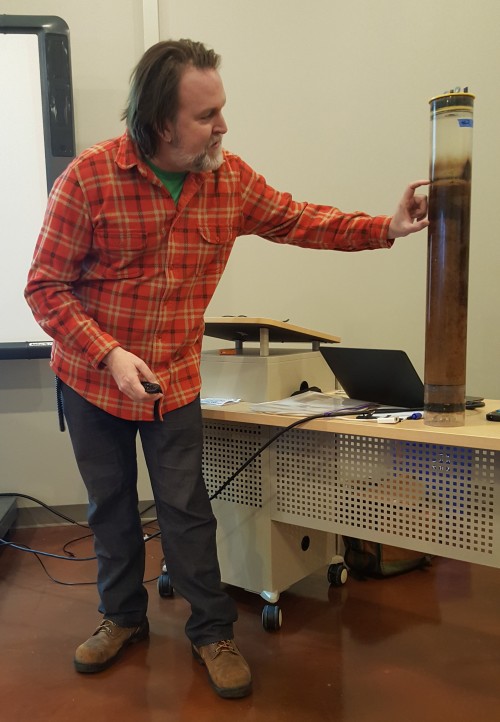 People gathered for April’s River Talk as Euan Reavie, a senior associate with the National Resources Research Institute, described his research on algae. “Tiny Fossils Shed Light on the Past and Future of Water Quality” was the focus of his talk.

“My group works with the algae in the harbor,” Reavie said. “The water is teeming with these microscopic plants.”

Reavie and his team analyze fossil algae by collecting sediment from the bottom of the Duluth-Superior Harbor and the St. Louis River Estuary. The process allows him to determine what’s going on at the base of the food web.

“We study the bottom of the food web to see changes before we see the negative effects on higher organisms, such as fish in the lake,” Reavie said.

Because of their hard work, Reavie and his program were approached by the Minnesota Department of Natural Resources (DNR) to confirm whether water quality has been improving in the estuary – especially, whether the modern sewage treatment systems in Duluth and Superior were effective in filtering out excess nutrients and other pollutants since they came online. According to Reavie, the water is far better now than it used to be.

There are many methods they use to collect the sediment cores. For the Duluth-Superior Harbor work, they pushed clear tubes into the sediment and retrieved them. Once in these tubes, the different layers that have been deposited over time are visible. The variety of organisms in the layers lets the researchers determine what the water quality was like in the past, according to Reavie. The remains of algae in the sediment are especially useful for this task.

Algae have short lifespans, so the algae community changes rapidly when conditions change. Each species has a specific preference for nutrients in the water. Based on which species are found in the sediment layers, Reavie’s team can reconstruct past nutrient levels.

“For the most part, the system is moving toward a lower-nutrient system,” Reavie said. While this may not sound like the best thing for the water environment, he is hopeful for what is happening. Fewer nutrients mean less pollution, which encourages more beneficial types of algae to grow.

“While some problems remain, there’s plenty of good news to be had here,” Reavie said.

River Talks is a monthly series of informal presentations hosted by the Lake Superior National Estuarine Research Reserve and the Minnesota and Wisconsin Sea Grant Programs at the Estuarium on Barker’s Island in Superior.

The last River Talk of the season will take place at 7 p.m. on May 9. The final topic will be the making of the Estuarium.