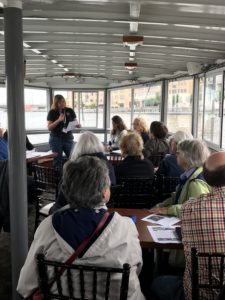 The 6th annual Clean Bay Backers’ Bringing Back the Bay Tour took place on Sept. 9. It included a report card on the health of the Fox River in Green Bay and a behind-the-scenes look at Tetra Tech’s operations — the general contractor overseeing remediation on PCB-laden sediment dredged from the river, with oversight from the U.S. Environmental Protection Agency and the Wisconsin Department of Natural Resources (DNR).

The double-loaded tour in a boat on the river and was the result of months of planning by the DNR citizen advisory group named with a playful take on the famous football team hailing from the area. 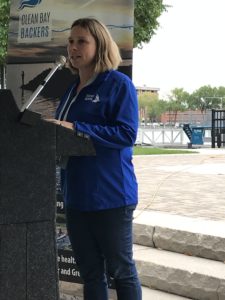 Our Water Quality Specialist Julia Noordyk is an important player on the Clean Bay Backers team and was all smiles when the tour came together with an enthusiastic gathering of 72 people from conservation groups, the DNR, federal agencies and elected officials at the state and local level.

In addition to the educational bent of the afternoon, it was also a bit of a preview celebration for a true environmental milestone — the conclusion of 15 years of what has been termed the world’s largest cleanup of toxic PCBs. Beth Olson, DNR project manager, said the project is expected to finish in mid-November, with monitoring of the contaminant continuing for another 30-plus years.

From 2004 to 2019, “a giant vacuum cleaner” has been at work on the riverbed, Olson said. PCBs love the sediment and bind to it. The contaminant is being removed, with positive results for the fish that could be consumed by humans. Levels of this endocrine-disrupting chemical have decreased by 98% in gizzard shad, 68% in the prized game fish walleye and 65% in smallmouth bass.

Aside from these promising percentages, there are plenty of other numbers to cite in regard to the Fox River Valley’s PCBs—a legacy of decades of producing carbonless copy paper in area mills:

Nine speakers aboard the River Tyme recreational boat also shared updates on other aspects of the river’s health and the opportunities a cleaner river provides. “This river is a golden thread running through our community,” said Wendy Townsend, Green Bay program manager, as she invoked the recreational and economic benefits of cheering along with the Clean Bay Backers for progress in bringing back the bay. 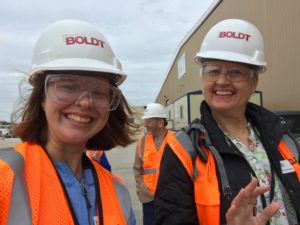