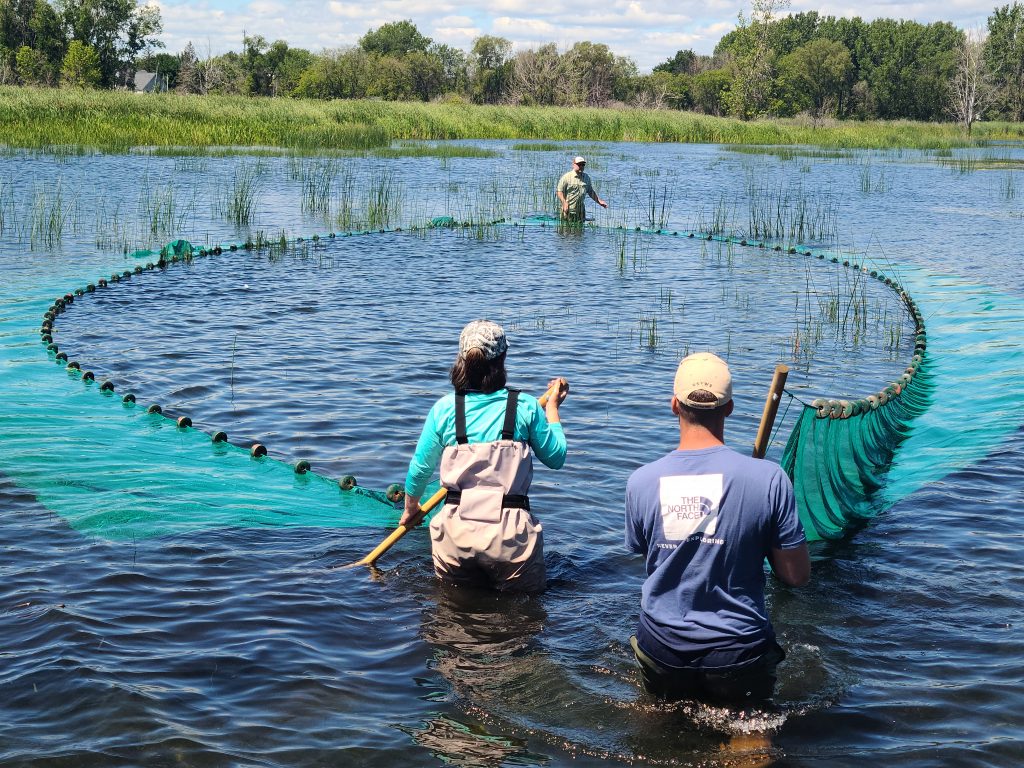 There’s nothing fishy about wanting to learn about colleagues’ projects more deeply, while also spending time with far-flung co-workers, right? Or is there? The numbers below—fish measurements in millimeters—were in fact, so fishy. 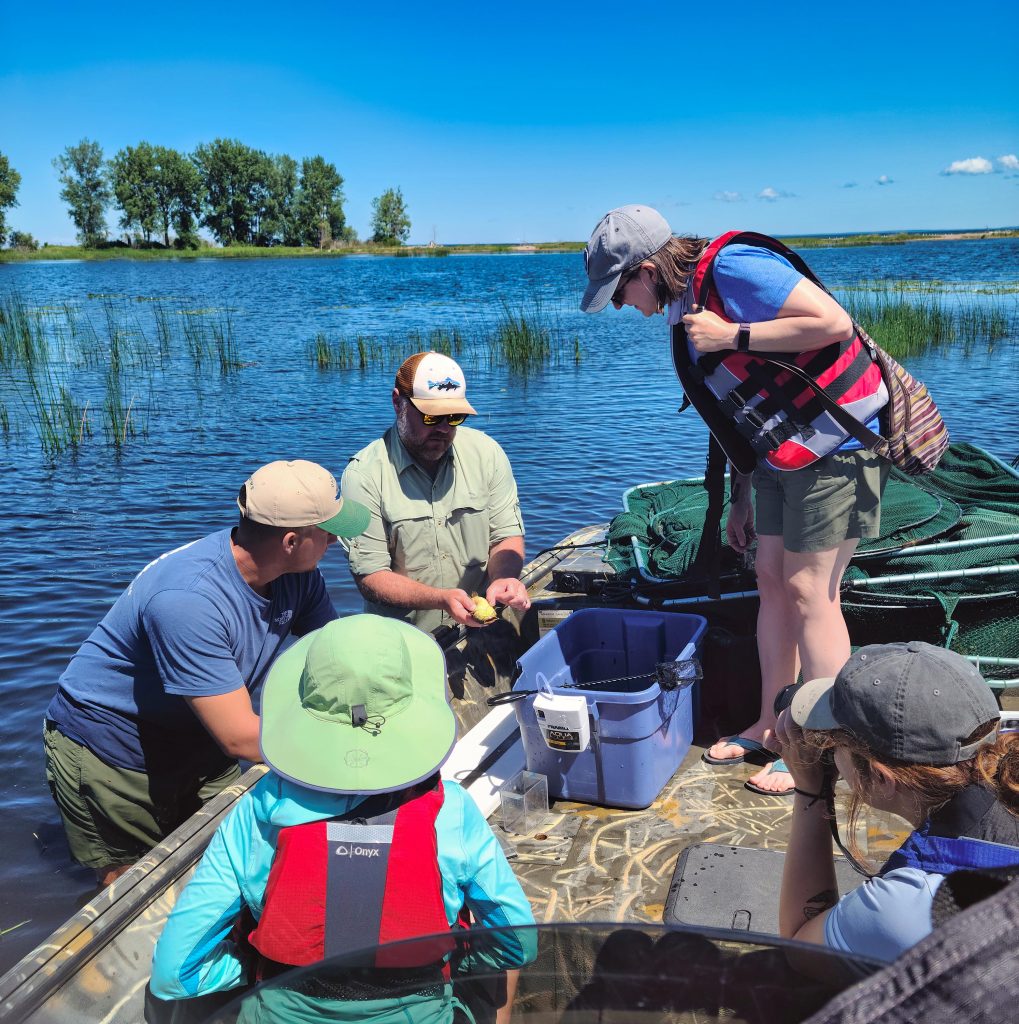 On an early August trip to the Seagull Bar State Natural Area on Lake Michigan, five members of the Sea Grant communications team (including me) were exposed to this count and what sounded like the recitation of another, decidedly piscivorous language.

As glorious sunshine streamed down in the sheltered small bay, our co-worker, Sea Grant Fisheries Specialist Titus Seilheimer, called out fish names and proportions. He had collected the fish, more than 100 in all, from both a 150-foot seine net and a fyke net.

In a neat hand and with a sharp pencil, University of Wisconsin-Green Bay Assistant Researcher Amy Carrozzino-Lyon recorded the counts of species type and measurements on a sheet of paper. She will take the figures back to her campus office and add them to  previously collected data about fish species found in four areas with fresh beds of wild rice on the western shore of Green Bay for her study about the effect of wild rice on the ecosystem.

The full record of wild rice’s historic presence in the world’s fifth largest lake is murky, but it is known that this wild grass, revered by Indigenous people, grew for centuries at river mouths on the lake until development, varying water levels and pollution took a toll. Now, the plant prefers shallow waters with organic, soft sediment and clear water that isn’t frequently or extremely stirred. 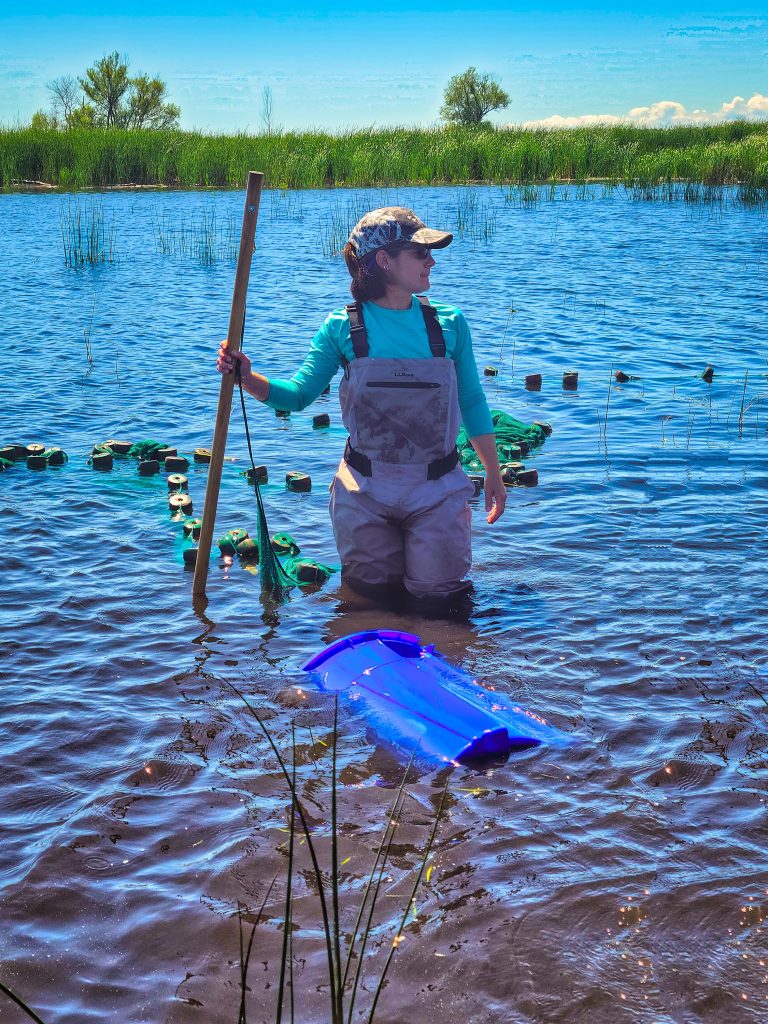 Carrozzino-Lyon has been restoring the stands of gracefully swaying rice, purchasing seed by the truckload and fostering nearly 40 acres of habitat. This year (2022) marks the seventh year of her efforts.

Wild rice’s effect on the ecosystem is also being checked by her two students, Noah Hoffmann and Colin Ritchie. That day, these bright young men, both students at UW-Green Bay, gave us lessons in dragonfly larvae growth, crayfish identification and the differences between native and nonnative aquatic plants.

This is all good stuff to us because we write and edit stories, post on social media and create videos and podcasts about the wonders of the Great Lakes. It was a hands-on tutorial for those of us who typically deal in words, audio and images, not slippery fish and underwater bugs.

It was also a chance to meet with our co-worker, Science Communicator Marie Zhuikov, who is based in Superior while we remaining four communicators, including Elizabeth White, Bonnie Willison and Jennifer Smith, are based in an office in Madison.

The trip not only connected us in person with valued colleagues Zhuikov and Seilheimer, but it also further proved to be a day to observe a fish count, marvel at nature’s beauty and contemplate a place where wild rice can flourish once more.