Commercial fishing trap nets are set off Two Rivers/Manitowoc and Sheboygan and in Door County. The nets are designed to catch whitefish and allow other non-target species to be released unharmed.

Avoid getting caught in the nets

Allow the buoys a wide berth. Rather than going straight down, the buoy anchor lines may angle away from the buoy due to wind or current.

Anglers are required to carry wire cutter on board

If you get hung up in the nets, cut the cables and lines immediately. DO NOT attempt to retrieve your gear.

Downrigger balls often fall out of the net once the cable is cut. If your gear gets tangled in the nets, tie a float onto the line or cable with your phone number on it to help retrieval of your gear.

Nets are marked with several flags. There is a single orange flag over the pot; a single dark colored flag in deep water off the pot; a pair of single orange flags at the end of the wings and a double orange flag at the end of the shallow lead. The single dark flag may be 1200 feet from the pot and so may be difficult to see in foggy conditions. There may be other buoys that mark additional anchors. Overall, the net, buoy lines and anchors may be over a 1/4 mile long. See illustration above.

After June 29, off Two Rivers/Manitowoc there is a flashing amber light above the double orange flag at night.

Anchor lines extend beyond the flags 400 to 600 feet away from the net.

Early in the season, trap nets may be set in water between 25 and 150 feet in  depth. Between June 29 and Labor Day, the nets are set in water 60 to 150 feet deep. The leads extend towards shore. The nets are anchored on the bottom and may be 45 feet high.

Learn more about fish and fisheries in our publications section. 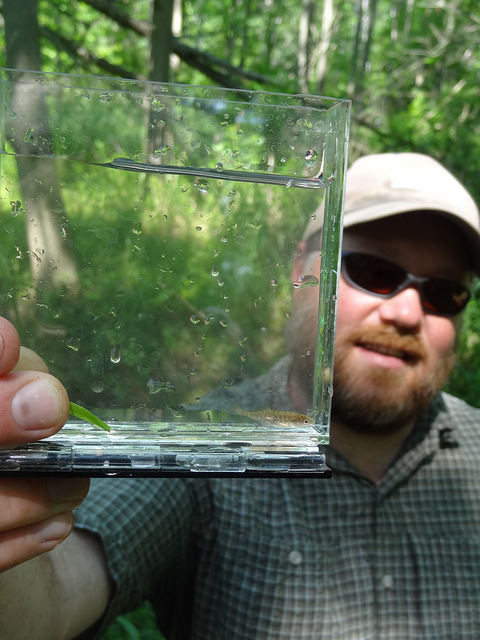