The Water We Swim In is a multi-episode podcast series created and hosted by Bonnie Willison, Sea Grant’s digital storyteller, along with student Hali Jama. The series recently won two awards in the inaugural national Signal Awards competition. 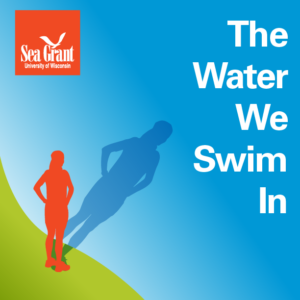 In the diversity, equity and inclusion category, the series won both a bronze award and the listener’s choice award.

“We had some really impressive competitors in the Signal Awards, and I’m honored to have even been a nominee. Also, it was great to see the support from the University of Wisconsin-Madison and Sea Grant communities in the listener’s choice voting competition,” Willison said.

The podcast explores water equity in the Great Lakes region. Topics explored have been inequities in water infrastructure and racism that have resulted in, for example, the ongoing potable water crisis in Jackson, Miss.; the intersection of Indigenous sovereignty, water quality and wild rice restoration on Wisconsin’s largest inland lake; and access to water recreation by people with disabilities.

The title of the podcast was sparked by a comment from one of the guests, Co-Executive Director Brenda Coley of Milwaukee Commons, who, when taking about the legacy of segregation in swimming pools and swimming lessons said, “Racism is the water we swim in…sometimes we don’t understand how pervasive it really is.”

This is the first year of the Signal Awards, which attracted more than 1,700 entries. Entries were hosted by figures such as Trevor Noah and Jon Stewart and produced by organizations such as Bloomberg Media, AMC and Apple. Nearly 15,000 people voted for listeners choice awards.