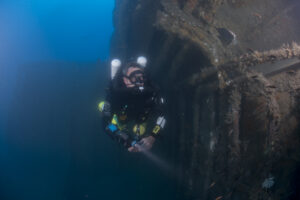 Russ Green used to be a college football coach. For four years, he was intimately familiar with the gridiron and its blocks, kick-offs and touchdowns. The precision of that turf configuration served him well in his succeeding profession, marine archaeology, which relies on exploratory dive sites that are mapped and measured in grids as a way to organize and understand underwater spaces and the heritage they yield.

His passion for marine archaeology has brought him to the role of Great Lakes regional coordinator for the Wisconsin Shipwreck Coast National Marine Sanctuary, which was officially designated this fall. In that role, he’s come quite a way since his graduate school days studying history. It was then he discovered the field. “I had no idea it even existed as a discipline; that it was a thing,” Green said. 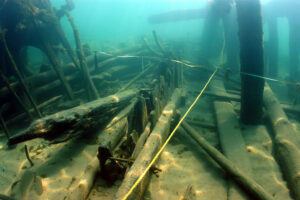 A Lake Michigan shipwreck, the Continental, being sectioned into a grid to study the site. Photo by Tamara Thomsen, Wisconsin Historical Society.

He set aside history and went on to get a master’s degree in marine archaeology and marine studies from East Carolina University, worked for the Wisconsin Historical Society (WHS) Maritime Preservation and Archaeology Program and from 2004 to 2016 was at the Thunder Bay National Marine Sanctuary.

Green has now joined the Wisconsin Sea Grant Advisory Council. His participation capitalizes on the complementary missions of the brand-new sanctuary and Sea Grant, a program cousin under the umbrella of the National Oceanic and Atmospheric Administration (NOAA).

“The sanctuary can be a great partner in communicating and studying climate change and other challenges facing Lake Michigan. I’m excited to join the council and learn more about how the sanctuary can support and facilitate broader Lake Michigan conservation,” Green said.

One example he called out are three buoys installed within sanctuary boundaries that will provide real-time data on wind, waves and water temperature at various depths. The information will mesh with Sea Grant’s research and education goals. The buoys were installed with support from the Great Lakes Observing System.

Green also already has a list of possible projects that draw on past activities, including educator participation in remote sensing with sonar. There has also been sanctuary support for an educator shipboard science workshop aboard the 19th-century replica schooner the Denis Sullivan. He hopes to see more of those in the future. Green also mentioned a series of mural installations in lakeshore communities, created in concert with Sea Grant, artists and educators based on prior collaborations. 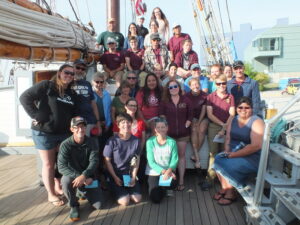 “The sanctuary can support Sea Grant science. Eventually, we’ll have staff, vessels and other operational support on the coast that can help facilitate Sea Grant’s work here. The research we do also ties in really well with some shared goals in the science community—understanding the benthic habitat in Lake Michigan, for example” said Green. “The lakebed mapping that we’re doing can contribute to that with some back-end processing. Essentially, we can map once and use it many times.”

Out of the larger NOAA Office of National Marine Sanctuaries that manages 15 locations protecting species, ecosystems and maritime history throughout the nation, the Wisconsin sanctuary is only the second based in fresh water. Its boundaries reach from Port Washington in the south to Two Rivers at the northern end, encompassing 36 known shipwrecks. Those wrecks are detailed on wisconsinshipwrecks.org, a joint Sea Grant-WHS website. The website is just one example from the 30-plus years Sea Grant has supported Great Lakes maritime archaeology, providing funding for projects and, more recently, educational workshops and a shipwreck learning kit.

The Wisconsin Sea Grant Advisory Council is appointed by the chancellor at the University of Wisconsin-Madison. It is made up of leaders in academia; state, local and tribal bodies; industry and the public. It ensures that a variety of viewpoints inform Sea Grant’s functioning and is accountable to stakeholders. Current membership stands at 16 people.