Vicky Harris has always loved biology—at least since 5th grade — and she’s an eternal optimist. Now retired from her position as Wisconsin Sea Grant’s water quality specialist in Green Bay, Harris reflects on her 50-year on-again off-again relationship with Sea Grant, and ponders the fate of the entire planet.

Harris’ relationship with Sea Grant started with a college class in oceanography taught by Professor John Pezzetta at the University of Wisconsin-Green Bay. She had transferred from UW-Madison as a premed student after the student protests against the Vietnam War had closed the UW campus and the Sterling Hall bombing raised doubts about the next semester.

Pezzetta had Sea Grant-funded research on the sediments surrounding two nuclear power plant water intakes near Two Rivers and Kewaunee and needed a research assistant to collect samples and analyze them back in the lab. Harris enjoyed the experience and continued to work with Pezzetta as he moved on to another project studying sediments around the coal-fired power plant in Green Bay.

As a graduate student, she worked with the U.S. Fish and Wildlife Service studying Green Bay waterfowl and macroinvertebrate populations and reviewing wetland permits.

In 1978, Sea Grant created a position for a field agent in Green Bay, and Harris was ready. 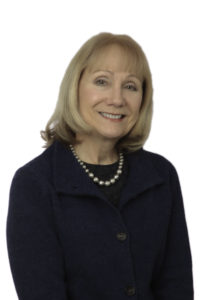 Vicky Harris had taken on multiple leadership roles as an advocate for the Lower Fox River, Green Bay and Lake Michigan.

“Sea Grant really was a key factor in my choosing Great Lakes management as a career to begin with, so going to work for them was wonderful,” she said. “The Green Bay field office was created by Sea Grant to develop an ecosystem-based research and outreach program for the bay, which was so polluted. I loved being part of developing a new ecosystem approach and learned so much from the researchers.”

However, at the time Harris was most interested in being a field biologist studying birds and wetlands, and she felt that working for a regulatory organization — an agency that had “power” — would have the most impact. So, she returned to the U.S. Fish and Wildlife Service in 1980 only to lose her job when Ronald Reagan was elected president and the new administration swept in with huge cuts to government agency budgets and staffing. From there she ended up working as the Northeast Wisconsin water resource planner and policy analyst at the Wisconsin Department of Natural Resources (DNR) — a position she would keep for about 17 years.

It was during this time that she began her involvement with several of the key projects that define her career, projects that she is still involved with even after her retirement in 2011.

Two of these projects are the Green Bay and Fox River Remedial Action Plan (RAP) and the Cat Island Restoration project. The RAP was created in the 1980s by the DNR, and Harris served as the onsite coordinator. She enlisted the involvement of researchers and community stakeholders to address the issues of contaminated sediment, poor water quality and lost or altered habitat in Green Bay. The Cat Island project evolved from the RAP and involves rebuilding a chain of barrier islands in southern Green Bay using dredged material to provide habitat while also providing a beneficial use for the dredged material. 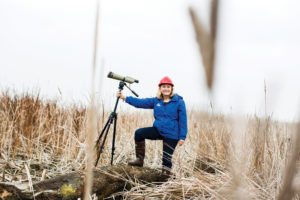 Harris was instrumental to the kickoff of the restoration of the Cat Islands and still serves on an advisory committee. Photo by Narayan Mahon.

When a position finally opened up at Sea Grant again, Harris jumped at the chance. “It’s the best decision I’ve ever made in my career,” she said. Sea Grant is clearly not a regulatory agency, so what made Harris want to leave the position she initially thought would be the most influential?

She explained, “I think I learned over time that research — having the facts — is absolutely necessary. And it was my work with stakeholders during the development and implementation of the remedial action plan that showed that outreach was as important — that research and outreach together were in fact the key factors and not necessarily regulatory authority. Authority only goes so far.”

Harris continues to work as a member of a couple of committees advising the RAP on its future activities. “I’ve been a lifelong committee participant, I guess. I’m going from the coordinator to just one of the masses, and I still like it…I am committed to it. That, I would say, has been a real passion for me,” she said.

She also remains active on the Cat Island project as a member of its advisory committee, which continues to meet regularly.

With Sea Grant, Harris also continues to keep a hand in. She serves as a member of the Committee on Outreach and Education that provides insights and guidance on communications, education and outreach initiatives of the program.

Yet another project that benefits from Harris’ continued involvement is the Clean Marina Program, which she developed in conjunction with the Wisconsin Marine Association in 2009. The program is designed to reduce pollution from marinas into Wisconsin’s waterways. To become certified, marinas agree to adopt a set of best-management practices. Program staff conduct site visits to verify marina practices and provide training and technical support to managers.

After her retirement from Sea Grant, Harris continued to work with the Wisconsin Marine Association and current Sea Grant Water Quality Specialist Julia Noordyk for a few hours a week, but limited funding kept the program from expanding. Then in 2019 Noordyk secured a $200,000 grant from the Fund for Lake Michigan and hired Theresa Qualls as the Clean Marina Program coordinator and which had an eye toward significant expansion in 2020. 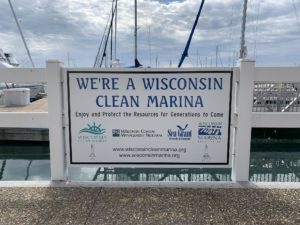 “The marinas certainly appreciate it here in Wisconsin, and everyone sees it as a win-win program. For very little investment really it’s very helpful for the marinas.” Photo by Mari Mitchell.

Unfortunately, COVID-19 is preventing travel and in-person work with the marinas, but new marinas are still joining the program. Harris is a member of the Clean Marina Technical Advisory Committee, and she remains very pleased with the project: “The marinas certainly appreciate it here in Wisconsin, and everyone sees it as a win-win program. For very little investment really it’s very helpful for the marinas.”

The Clean Marina project remains fluid, but the State of the Bay report stands tall as a comprehensive record in time about the state of Green Bay as an ecosystem. It’s the third iteration of the report, and by far the most comprehensive, including data on water quality, fish and wildlife populations, aquatic invasive species, beach conditions and contaminants.

Harris hired Theresa Qualls and together they spent years working on the report along with Vicky’s husband, Hallett J. “Bud” Harris, emeritus professor of natural and applied sciences at UW-Green Bay. Bud authored the first two State of the Bay reports, but with guidance and editing from Vicky and Bud, Qualls did the hard work of pulling the expanded report together.

“Theresa is amazing at organizing and presenting data, and I’m so glad she is continuing her work with Sea Grant,” Harris said.

Together the Harrises were crucial to Sea Grant’s work in Green Bay for decades, with Bud Harris beginning his work in the late 1960s. In February, they received the Wisconsin Sea Grant Actionable Science Award as a team for their devotion to the cleanup of the Lower Fox River and Green Bay.

Looking into the future for Green Bay, Harris sees significant challenges — “I’ve always been an eternal optimist, but I tell you the past four years have been pretty hard to remain optimistic.”

One of the biggest problems she’s seeing is the continual rise in population, both worldwide and locally. “We keep battling for the improvement of Green Bay and yet with all the progress that’s been made in cutting back on factory discharges and sewage discharges and even the nonpoint source agricultural runoff, we’re still not making headway because we have twice as many cows now in the watershed and twice as many people,” she said.

Another problem that concerns Harris is the level of public trust placed in scientists, and even science itself. Starting with the issue of fossil fuels and climate change and continuing through other issues, there have been increasing challenges to the concept of unbiased scientists and even uncontested facts. In the complex world of environmental management, it’s important to have mangers and stakeholders working together, and stakeholder support is crucial.

“People are reluctant to change their ways. If we take more actions to reduce our carbon emissions, we can perhaps over time back off from disaster. In the meantime climate change is causing serious damages to agriculture and species on the planet. Maybe the planet will = recover in some way. It will be different,” she continued.

But Harris is an optimist, and she believes in people: “I’d have to say that when it comes down to an individual citizen, the people that I talk with and the people that live in my community, I remain optimistic. When you really talk to people about what they believe in and what they value in their life, the environment is still important, clean water is important, clean air is important. They value our Great Lakes.”