In 1966, when President Lyndon Johnson signed the National Sea Grant College Act, it’s because of Robert Ragotzkie that not just oceans and the salty coasts were included in the law. The Great Lakes were also provided with resources to conduct research on and offer education and outreach related to the world’s largest source of fresh water.

The roots of Sea Grant were in a 1963 speech delivered by a dean at the University of Minnesota, Athelstan Spilhaus, who proposed the establishment of a Sea Grant College system akin to the Land Grant College system that would develop the potential of oceans. Ragotzkie advocated the Great Lakes be included in the proposal. After all, he successfully reasoned, the lakes are inland oceans. 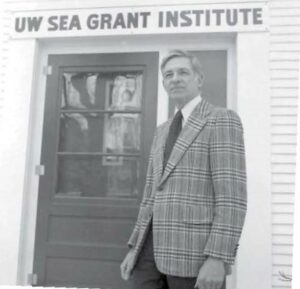 Ragotzkie completed undergraduate and graduate work at Rutgers University and earned a Ph.D. at the University of Wisconsin-Madison in 1953. He then ran the Marine Studies Institute on Sapelo Island, Georgia, for five years prior to returning to Madison where he began a teaching career with the Department of Meteorology. Lakes were the focus of his scholarship and in 1968 he became the first director of the Wisconsin Sea Grant College Program. He died on Nov. 4 at the age of 97.

“While the National Sea Grant program was in its infancy, Ragotzkie quickly managed to bring in a healthy amount of federal and state funding to make the University of Wisconsin Sea Grant Program one of the largest and most successful research, outreach and educational programs in the nation,” said Anders Andren, the second director of Wisconsin Sea Grant.

Andren continued, “His understanding of Great Lakes scientific issues, foresight and capability to attract the best research talent in the state was just phenomenal—and way ahead of its time. The Great Lakes research community, state of Wisconsin and University of Wisconsin-Madison has lost a great scientific mind and leader.”

Ragotzkie retired from UW-Madison and spent his remaining years in the Madison area. He leaves behind his wife, Elizabeth, two daughters, a son, two grandchildren and two great-grandchildren.

His recollections of the early days of Sea Grant, along with reflections on retirement pursuits, are captured in this 2018 blog post.