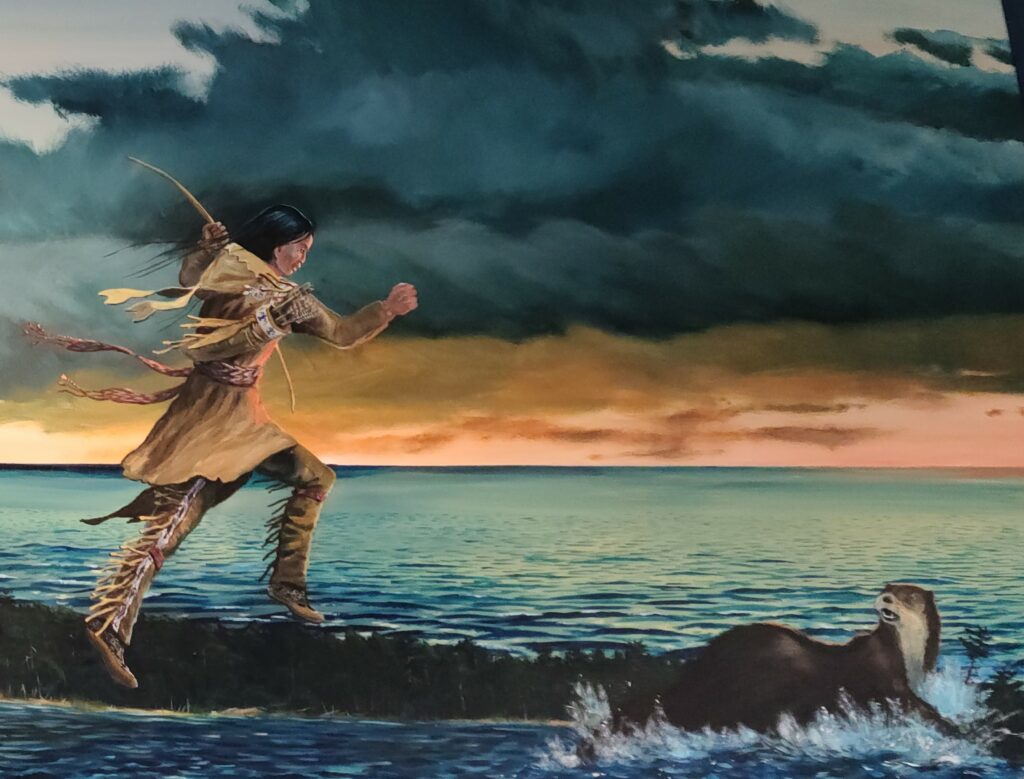 Mural #2 in the Superior Public Library by Carl Gawboy. It shows the area where the Ojibwe settled on Wisconsin and Minnesota points on Lake Superior and how the points were separated by a giant otter. Image taken with permission by Marie Zhuikov, Wisconsin Sea Grant.

During the latest St. Louis River Summit, I had the chance to attend a field trip to the library in Superior, Wisconsin. What’s in a library that could relate to the summit? A series of 35 murals line its walls, showing the history of the area. Many feature the St. Louis River, Duluth-Superior Harbor and Lake Superior.

The murals were painted over 10 years by artist Carl Gawboy, an Elder enrolled in the Bois Fort Band of Chippewa. The murals begin with the Ojibwe creation story and continue through the 20th century, reflecting how people have interacted with the landscape through time.

Local historian and retired librarian Teddie Meronek led the tour. “I like to say I was here at the birth of the murals, but that started long before any paint went on canvas,” Meronek said. She described how Paul Gaboriault, the library director who commissioned the murals, was a former co-worker of Gawboy’s. Gawboy was born in Cloquet, Minnesota, and grew up on a family farm outside of Ely. He eventually taught at Ely High School, which is where he met Gaboriault. The friends both ended up back in the Twin Ports.

To research the murals, Meronek studied Gaboriault’s and Gawboy’s correspondence. She said the library used to be a Super One grocery store. “If you really look at this building it was just a big warehouse. It wasn’t built for a library. Dr. Gaboriault knew, in his way, that it needed something, and the first thing he thought of were murals.”

The second mural in the series shows the story of how the Superior Harbor opening was created through Wisconsin Point. A giant otter digs as a Native man approaches.

“The great otter represents the Ojibwe religion,” Meronek said. “He is breaking an entryway from Lake Superior into the harbor. The human figure is Nanabozho. He is bringing arts and fire to the land. That was Carl’s interpretation of the legend. The otter is pictured as being so large because it’s representing power.”

According to Gawboy, Lake Superior ties all the murals together, Meronek said. “You can’t always see it in every mural but it’s there. It influences what is going on, which is very true. I’ve lived three blocks from the bay of Lake Superior every day of my life and I can tell you there’s not a day that goes by that the lake doesn’t influence you in some way.”

The location of the horizon line also links the paintings. Meronek said it’s in the same place in each image. As she walked past the murals, she described each one, sharing her impressive knowledge of local history along with personal observations. Other murals include notable buildings and personages, as well as historic events.

Meronek ended the tour on a somber note at a mural of the Edmund Fitzgerald. She often listens to Gordon Lightfoot’s song about the ill-fated ship. “There’s one line in it that always makes me cry: ‘Does anyone know where the love of God goes when the waves turn the minutes to hours.’ Always beware of Lake Superior, right? I can’t even put my foot in it, it’s too cold! What a beautiful thing though, isn’t it? It’s the greatest of the Great Lakes, right? An inland ocean.”

If you’re ever in Superior, stop in the library and take a look. Of course, if you’re not a Superior resident, you can’t check out a book, but you can check out the murals, so to speak. Not planning a visit soon? You can also see the murals online.