It’s time for round two of the Spring Thaw Throwdown Least Wanted AIS Tournament! After what was mostly a round of non-competitive matchups, we think that this week, we should see some closer matches and perhaps more surprising results. Let’s learn more about our divisional final matchups!

If you already know who you want the least, vote at the link below by Thursday at 2 p.m. (central): 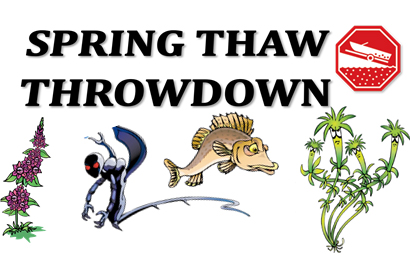 This might be the most exciting matchup of the divisional finals: the macrophyte that has been on the scene for a while vs. the macroalgae that is just now working its way into Wisconsin and Minnesota.

There are a lot of factors here to consider for determining your least wanted. EWM is in more than 800 bodies of water in Wisconsin, but it is also subject to a robust (albeit costly) management program that can limit or reduce impacts. In contrast, SSW is only in 12 bodies of water in Wisconsin, but management efforts of existing populations are not as well dialed as for EWM. I know we’ll all be watching this one closely.

Can the rusty crayfish make it two in a row? After winning a close match against New Zealand mudsnails, they now go up against a formidable opponent in the zebra and quagga mussels.

In more than 700 bodies of water in Wisconsin, the rusties certainly have more wins in Wisconsin than the mussels. Outside of that, though, they may have to come up with some unique ways to compete. The mussels have mobilized AIS programs nationwide to take action to stop invasive species and can be transported in a boat’s hard-to-inspect nooks and crannies. Rusty crayfish can be stopped by not using them for bait and by not moving live crayfish, which are hard pressed to access the same parts of watercraft that mussels can.

Fish Divisional Final: Round goby vs. Silver and bighead carp

What do you want least: the fish that has a demonstrated impact in the Great lakes by eating sportfish eggs and outcompeting native benthic fish, or the ones that aren’t in the Great Lakes yet, but could have a large impact on tributaries and shallow areas of the Great Lakes?

At first glance, this looks like a classic plant versus fish matchup. When we dig a little deeper, this is really that with a twist. Both are a little on the fringe of those conferences. As a wetland plant, Phragmites might not pique the interest of people following the tournament–and as not a fish, but a virus that affects fish, VHS might not see the backing an actual fish might see. However, both have specialists that work hard to make sure that these are both really unwanted.

Whichever species can best appeal to the traditional fans of their respective conferences while getting some turnout from their specialists will likely take this matchup. Yes, we know this is like saying the team that scores the most points will win, but if real sportscasters can get away with saying this, we think we can, too!