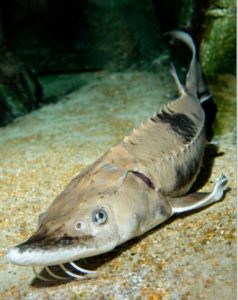 The Discovery Channel’s Shark Week kicks off on July 11. As the spotlight turns to that species, the Great Lakes can’t boast any of those sandpaper-y-skinned creatures, but coursing through its waters is another cartilaginous beast, the lake sturgeon. Here are five facts about the fish.

Jumbo-sized, just not in the teeth department

The lake sturgeon is the largest fish in the Great Lakes. It can grow to a weight of more than 300 pounds and reach a length of 9 feet. A lake sturgeon’s skeleton is made up of cartilage—like a shark—but they lack a shark’s fearsome allotment of choppers. The fish have a soft mouth and no teeth, relying on dangling organs called barbels to sense their meals of invertebrates, small clams and insect larvae, which are sucked into the mouth, sand and all. Everything but the food is then expelled through side gill slits. Instead of the shark’s trademark, and some would say ominous, fin, sturgeon have rows of scutes running the length of their bodies. These bony pointed plates smooth out with age.

Lake sturgeon are considered a living fossil because the species has survived—virtually unchanged—for more than 150 million years. Sturgeon were around during the time of the dinosaurs. It hasn’t been easy, though. Today, because of overfishing, pollution and a loss of habitat, lake sturgeon are struggling to survive. For example, in Lake Michigan, scientists estimate only 5,000 adult sturgeon remain, well below 1% of the most conservative estimates of historic numbers.

Wisconsin is home to more than just Bucky Badger

Wisconsin’s Lake Winnebago is home to the world’s largest population of lake sturgeon. The Wisconsin Department of Natural Resources has been managing the population in that lake since 1903. Wisconsin Sea Grant lends a hand through its support for Fred Binkowski at the School of Freshwater Sciences at the University of Wisconsin-Milwaukee. He has reared youngsters in his lab, assisted in the field and even extended his devotion to daily communication. Binkowski’s email address incorporates the word “sturgeon” instead of his own moniker.

In the late 1800s, caviar made from the eggs of Great Lakes sturgeon was sold to enterprising Europeans who relabeled it as “Russian caviar” and shipped the delicacy back to socially climbing Americans eager to serve it at swanky functions.

Sing a song of sturgeon

Using an underwater microphone on the Wolf River in 2012, a Wisconsin Sea Grant staffer was the first ever to capture the “song of the sturgeon.” Really, it is a slightly muffled clicking and booming sound (hear it here) that biologists think it is a way for a girl sturgeon and a boy sturgeon to call to each other during the spring mating season.

To learn more, check out this video and test your knowledge with a worksheet.