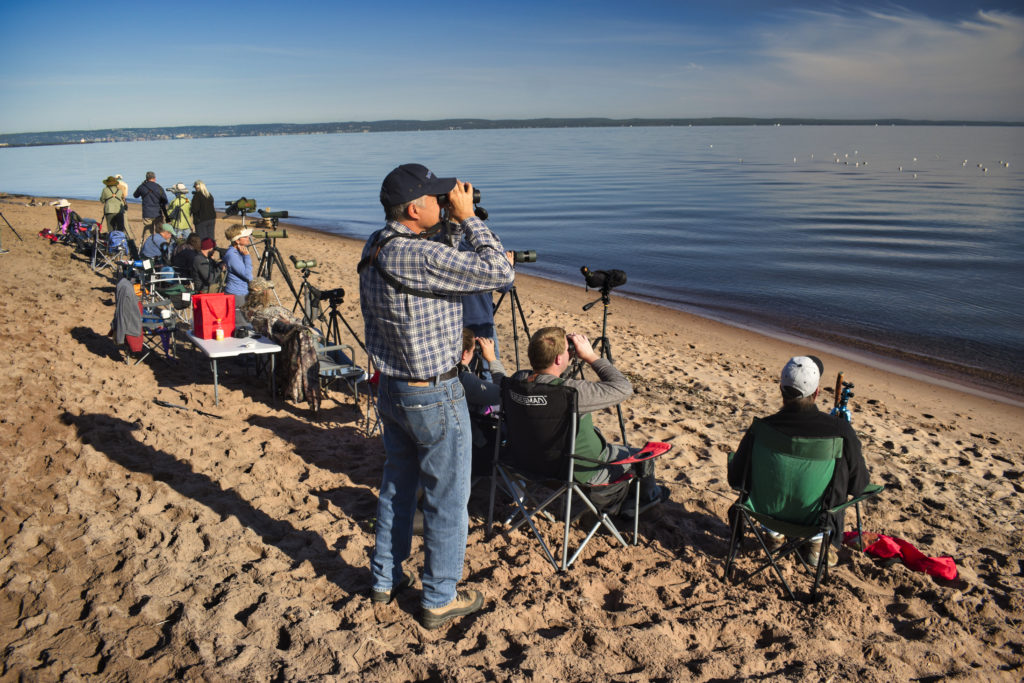 The third weekend in September is traditionally a time for beach cleanups by communities in the Great Lakes. Volunteers scour beaches and shorelines for trash as part of the International Coastal Cleanup. Our Sea Grant staff members got in the spirit, participating in cleanups spanning across the state, from Wisconsin Point in Lake Superior, to Madison, to Manitowoc on Lake Michigan. 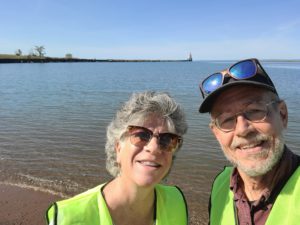 The event on Wisconsin Point featured a twist: birding. Besides being a good time to collect trash, this season offers a narrow window for Wisconsin birders to see parasitic jaegers, fast-flying pirates of the water bird world, as they migrate past Wisconsin Point from the arctic tundra to southern climes.

The “parasitic” part of their name comes from their food-stealing habits. They are categorized as “kleptoparasites,” which means they steal food from other seabirds.

The Friends of the Lake Superior Reserve (FOLSR) took advantage of the timing to invite Jaegerfest birders and FOLSR members to cleanup the beach when they weren’t on the lookout for birds.

Science communicator Marie Zhuikov and her husband have attended many beach cleanups in the past, but never one that combined jaeger-watching. On a calm and quiet Saturday morning, they joined the professional birders and their high-powered spotting scopes. 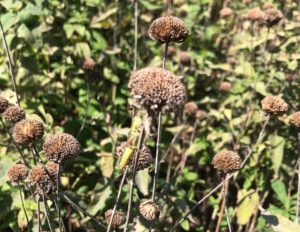 Zhuikov and her husband had better luck finding trash than birds. Alas, no jaegers were to be seen, although many ring-billed and herring gulls floated serenely in the lake. The duo moved to the end of the point and collected two bags of trash from the beach. The most interesting finds? A single Birkenstock sandal and fireworks debris.

Their efforts became even more impressive with the addition of four other bags of garbage plus a car bumper that others had collected and left bagged near the parking lot. All total, their haul weighed 160 pounds!

Their colleagues editor Elizabeth White, educator Ginny Carlton and graphic designer Yael Gen participated in a more botanical cleanup at the Lakeshore Nature Preserve on the Madison campus. They began by collecting seeds from dried bee balm plants. Gen said they pulled the seed heads off and saved them in paper bags. “If you turn one upside down and shake it, the seeds resemble ground pepper,” she said. The seeds will be used for a class and to reseed other areas of the preserve. 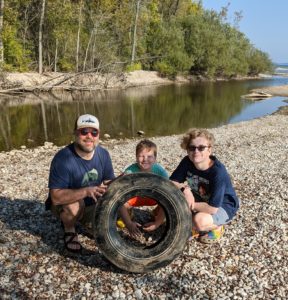 Titus Seilheimer and his sons with one of their beach cleanup finds in Manitowoc. Image credit: Amy Seilheimer

Next, they got a workout clearing an invasive buckthorn thicket along the shores of Lake Mendota using loppers and saws.

Fisheries specialist Titus Seilheimer and his family worked on Silver Creek Beach in Manitowoc. “We typically organize two cleanups per year, spring and fall,” Seilheimer said. “We had two other volunteers for our cleanup for a total of six. We removed 68 pounds of trash. That included two tires for most of the weight. We found fairly typical trash with 40 cigarette butts, small pieces of foam and plastic, shotgun shells and wads, bottle caps and plastic bottles.”

Way to go, Sea Grant staff! You cleaned up 228 pounds of trash, plus gobs of unwanted plants and provided seeds for the future. A commendable effort for one morning in September.