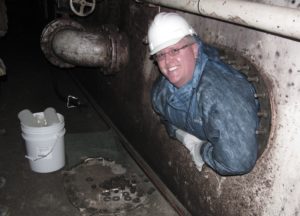 Matt TenEyck, climbing out of a ballast water tank on a ship. Image by Carol Wolosz.

TenEyck’s institute recently took over management of the ballast water testing facility located on Montreal Pier in the harbor near Barker’s Island. Called the Great Water Research Collaborative, the project provides scientific services to the maritime industry to promote “green shipping.” TenEyck said its focus is to test technologies designed to prevent new ballast water introductions of invasive species in the Great Lakes.

Contrary to popular belief, this does not mean that such systems would kill everything in the discharged ballast water. “The standard these technologies need to meet is fewer than 10 animals alive in 1,000 liters of water.”

Many of the audience members were eating popcorn in liter cardboard containers, and TenEyck pointed out that the standard was the equivalent of 10 organisms alive in about 1,000 popcorn containers.

“This is actually a higher sterility standard than hospitals are held to,” TenEyck said. “It’s a matter of risk management.” Also, such systems need to remove viruses and cannot discharge toxic substances back into the harbor.

Some of the recent bench-testing they’ve done includes technologies that use sound waves or electric currents.

Land testing makes use of four large white mock ballast tanks that are the major features of the Montreal Pier facility. TenEyck explained that two of the tanks are used for treatment testing and the other two function as scientific controls. They collect data during experiments every 15 seconds.

Shipboard testing involves using a proposed technology on a ship for six months in a variety of water quality conditions.

After testing, the collaborative shares the results with the inventors. TenEyck said that so far, they’ve tested 26 bench-scale systems, of which four had promise. They’ve also tested 15 land-based systems and three shipboard systems. They have used things like chlorine, lye, hydrogen peroxide, ultra-violet light, ultrasound and sonic energy.

Only one other ballast water research facility exists in the U.S.: the Golden Bear Research Center in California.

The search for a workable system continues. “Our job is to be knowledgeable and provide sound science for the process,” TenEyck said. “We have no stake in the outcome. We serve as a third party and provide credible data.”

The next River Talk will take place at 7 p.m. on Jan. 8, 2020, also at the Estuarium. Duluth Seaway Port Authority Director Deb DeLuca will discuss issues that the Duluth-Superior Harbor faces.

River Talks is an informal monthly series about the St. Louis River Estuary hosted by the Lake Superior National Estuarine Research Reserve and the Minnesota and Wisconsin Sea Grant programs.