Blog > Newton Creek under the microscope

Newton Creek with a boom on it for containing contaminants after the Husky Energy Refinery fire in April 2018. Image courtesy of the Lake Superior National Estuarine Research Reserve.

The clear water in Newton Creek, which flows through the city of Superior, is deceptive. During her presentation for River Talks on May 8, Lorena Rios-Mendoza with the University of Wisconsin-Superior, said she takes extra precautions to protect her “children” from it. Those children are her student assistants who process the water as part of a monitoring project to detect contaminants in it. 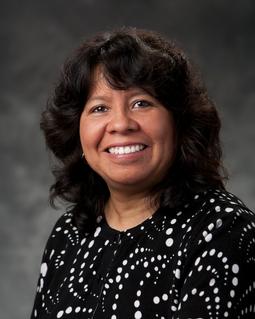 Lorena Rios-Mendoza. Image courtesy of the University of Wisconsin-Superior.

“The water samples look clean but they have toxic compounds in them,” Rios said. She also did not recommend that other children come into contact with the creek water.

Rios is looking for polyaromatic compounds, which are a group of over 100 chemicals that are formed during the incomplete burning of oil and wood, and other products like tobacco. She explained that these compounds are highly toxic, potentially causing cancer and disrupting the endocrine systems of people and animals.

After the Husky Energy Refinery fire in the spring of 2018, Rios began the monitoring project with the support of the Lake Superior National Estuarine Research Reserve. She and her students collected water and sediment samples for analysis through December of last year and, now that the ice is out, are taking them through December of this year.

Newton Creek flows for 1.6 miles through industrial, commercial, recreational and residential areas in Superior. It serves basically as a discharge channel for the refinery. 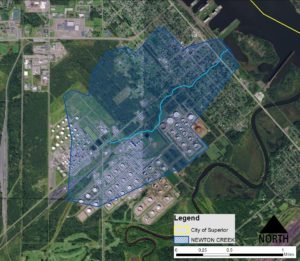 Newton Creek. Image courtesy of the city of Superior.

The creek enters Superior Bay at Hog Island inlet, which was the site of a major cleanup project that ended in 2005. Although it may be cleaner, the creek is still listed on the Wisconsin Department of Natural Resource’s Impaired Waters list for chronic pollution by metals, polyaromatic hydrocarbons (PAHs), scum, and polyfluoroalkyl substances (PFAS) from firefighting foam.

During her talk, Rios said they are looking for 18 PAHs declared by the Environmental Protection Agency as the most toxic. Already they have found 15 PAHs in the water samples, including flouranthene, phenanthene and pyrene. She hasn’t had the opportunity to look into how the amounts of these chemicals compare to previous amounts found in the creek, or if the levels pose a public health risk. She has also not analyzed the sediment samples yet. They are relegated to a freezer until funding comes through for that.

A recent Duluth News Tribune story described problems in the creek with PFAS and announced plans for the refinery to end its discharge into the creek, opting instead for treatment through Superior’s wastewater treatment system.

Rios’ other research passion is microplastics. She is known for her work locally, in the Great Lakes and the North Pacific Ocean to assess the amounts and impacts of tiny pieces of plastic on aquatic life and water quality. She’s applying that passion to this project, too, by quantifying the amount of plastic in the creek and looking at how these particles absorb contaminants like the PAHs.

This was the last River Talk for the 2018-2019 season. The series is hosted by the Reserve and the Wisconsin and Minnesota Sea Grant programs. Be sure to check us out next year!