Back in 2004, when I worked for Minnesota Sea Grant, I was part of an effort to eradicate “feral” goldfish that had been flourishing in a pond on the University of Minnesota Duluth campus. The two-acre Rock Pond drained into a trout stream, which led to Lake Superior. Although it’s unlikely the goldfish would have survived in Lake Superior, they are illegal to release into waterways, and it’s not a good idea to have them swimming around in trout streams or a Great Lake. 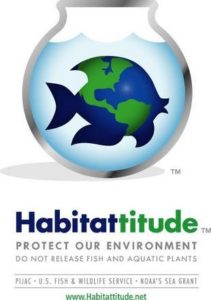 After considering all options, a plan was put into place to drain the pond and compost the goldfish. At that same time, we were in the middle of developing “Habitattitude,” a national educational campaign that sought to prevent the release of aquarium and water garden fish and plants. Developed by Sea Grant, the U.S. Fish and Wildlife Service and the Pet Industry Joint Advisory Council and involving large aquarium fish retailers such as PetCo, Wal-Mart and others, the campaign is still active today.

We decided Rock Pond would make a perfect pilot test of the new campaign logo and messages. After all, we didn’t want to clean up the pond only to have goldfish find their mysterious way back into it. For several years, we targeted the college students a few weeks before they left for the summer with emails, fliers in residence halls, and signs near the pond offering information about alternatives to releasing their unwanted pets.

It seemed to work well. As far as I know, the pond has not been infested with goldfish since. But I suppose you’re wondering why I referenced “murder” in the title of this story. Well, let me tell you a story behind the story.

After Rock Pond was drained, my supervisor at the time, Minnesota Sea Grant Assistant Director Jeff Gunderson, was back in his office looking over photos he took. He noticed something strange. He called me and our invasive species coordinator, Doug Jensen, into his office. He enlarged a section of a photo that seemed to show something white in the bottom of the pond.

“What does this look like to you?” Gunderson asked.

Jensen and I looked at the image and then looked at each other in disbelief. “That looks like a human skull!” I said.

We examined the image some more and came to consensus that yes, it very well could be a skull, half-buried in the mud.

Adrenaline coursed through my Sea Grant science communicator’s heart. We could have a murder mystery on our hands. Murder, combined with aquatic invasive species, what a wonderous and newsworthy combination!

What happened after that is a bit blurry in my memory, but I think we alerted the campus police and Gunderson sent them the photo. They investigated quickly. The result? Yes, it was a skull . . .

BUT, it was a plastic skull – like one a person would use for Halloween or some sort of occult ritual. (It had symbols carved into it.)

We were a bit deflated by the news, but also happy that no one had met their demise in the pond with the goldfishes.

It just goes to show that even with projects as routine as combatting invasive species, exciting things can happen.