Sea Grant has had both a focus on and staff dedicated to the understanding and stewardship of the Green Bay watershed for nearly 50 years, dating back to when the Sea Grant Green Bay Subprogram was established on the University of Wisconsin-Green Bay campus in the late 1970s. 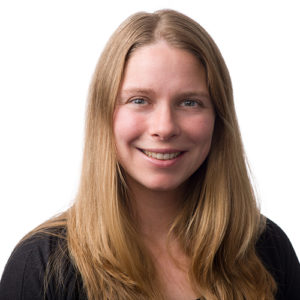 Julia Noordyk now fulfills this longstanding Sea Grant responsibility for the bay of Green Bay, which she termed “a pretty special place.” The bay itself spans 1,600 miles. It’s at the heart of the world’s largest freshwater estuary, laced with agriculture and manufacturing. It’s also a storied place where Indigenous people have lived for 10,000 years and where the first European to have come to what is now known as Wisconsin stepped off a boat in Green Bay onto Red Banks, roughly a mile from the city of Green Bay.

In her role as water quality and coastal communities outreach specialist Noordyk weaves the legacy of this commerce, agriculture and human interaction into contemporary conversations and actions.

Her second priority is community flood resilience, with a focus on the East River, one of the only undammed rivers in northeastern Wisconsin. It’s a tributary of the Fox River, which flows to the bay and is high in nutrient and sediments. Reducing runoff through nature-based infrastructure protects surface waters from contaminants and can reduce East River flooding.

This is what Noordyk sees as an evolution in water quality approaches for what she likes to call the “fresh-tuary.” “Historically, the (Sea Grant) office was set up and really focused on the Fox River, the bay of Green Bay and water quality. A lot of that was driven by industrial pollution like PCBs and also agricultural runoff,” she said. “That’s been most of the work for last 50 years, which is awesome. Now, the PCB cleanup is over, and things are improving.”

She continued, “Agriculture runoff is still one of the biggest issues in our area for water quality, but what has been changing over the past couple decades is how we think about restoration more broadly.”

Noordyk said there’s been a movement to address water challenges that communities care about and connect those issues to water quality. Front and center, she pointed to flooding. “How can we help solve problems that have benefits to both water quality and flood mitigation?”

Answering her own rhetorical question, Noordyk said, “We have to give people hope with science and with working to solve these environmental issues.” That is her goal for the next 50 years of Sea Grant’s work in her region.

As for the future of the human dimensions of her work, Noordyk said, “A small piece of my efforts is working towards a more inclusive workforce, making connections with our First Nation communities and the bay of Green Bay.”

Noordyk hosted a graduate assistantship that supported an Indigenous-identifying student in exploring the Great Lakes. She said, “That person is really focused on helping make connections between restoration and projects with UW-Green Bay and First Nations. It’s to bring the voice back to the land from a First-Nation perspective.”