Some of the best holidays are invented (Festivus, anyone?). Lovers of all things aquatic have something to celebrate in December: 25 Days of Fishmas! And don’t worry, you don’t have to scour the mall for presents – just hop on Twitter to participate.

25 Days of Fishmas is a science communication effort spearheaded by Katie O’Reilly, a 2018 Knauss Fellow in the National Sea Grant Office. As Katie explained on Twitter, “It’s a month-long celebration of all things fishy where every day leading up to Dec. 25, I feature a different fish species from the Great Lakes. I encourage you to participate by sharing your insight, questions and stories!”

Just look for the #Fishmas or #25daysofFishmas hashtags on Twitter. 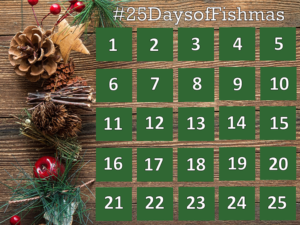 As it happens, Wisconsin Sea Grant plays a role in the genesis of Fishmas; Katie created it in 2016 based on the “Great Lakes Fishes” poster we publish. (Want your own? Check our publications store.)

Said Katie, “I saw the poster and was reminded of an advent calendar… only instead of candy, you got facts about Great Lakes fish species!” Each day on Twitter, she’ll feature one species–either native or introduced–and, through a series of tweets, share interesting background information.

“Part of the reason I did the first 25 Days of Fishmas was because I wanted to share all of the cool things I had seen as a grad student studying Lake Michigan coastal wetlands. For a lot of people, seeing Great Lakes fish isn’t a common thing (‘out of sight, out of mind’) and they don’t usually know about lakes’ diversity of fish,” Katie added.

One of the most gratifying things she’s found is that many tweeters have shared their personal memories about the Great Lakes. 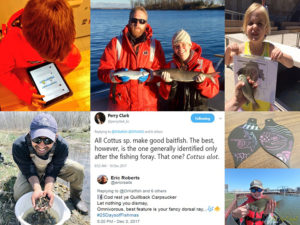 A recap of some of the highlights of Fishmas 2017.

“Honestly, what 25 Days of Fishmas really showed me was what makes the Great Lakes great: the people who care for them. This event brings together diverse audiences to talk about the issues facing the Great Lakes. By involving scientists, agencies and members of the public, this exercise in science communication has become a community effort with individuals contributing articles, photos and anecdotes.”

Katie credits the Great Lakes Sea Grant programs for embracing the Fishmas spirit and keeping a lively dialogue going. Some of its most prolific tweeters are Solomon David and Wisconsin’s own Titus Seilheimer, aka @DrFishSG, who is fired up for this year’s piscine posts.

Said Titus, a fisheries specialist, “Like the song says, it’s the hap-happiest time of the year! Fishmas is something I’ve been looking forward to for the last couple years. Katie does a great job of finding an interesting mix of species and encouraging discussions on the different species. We’ll all learn new things.”

With a decade of experience working on the Great Lakes, Manitowoc-based Titus chimes in with pictures or stories about wetland fish, commercial species, or interesting things happening in the food web.

“My favorite species are usually the underappreciated ones like the central mudminnow or tadpole madtom. More people haven’t heard of them, but those who have been stung by the venom on the tadpole madtom will remember them,” said Titus.

We hope you’ll catch the spirit and log on to the discussion. Happy Fishmas, one and all!